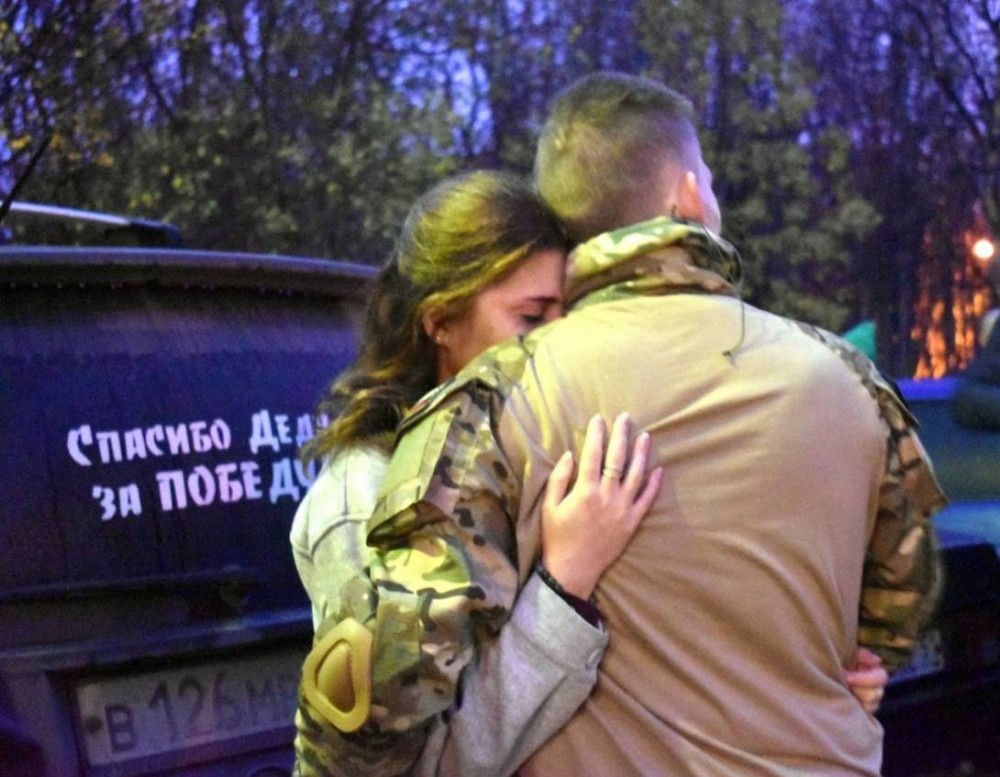 A last good-bye before battle in Russia's war of aggression

"Return home safely," a woman sings in a farewell performance to hundreds of Russian reservists lined up for war. But the singer and her music band hardly reassures the growing number of relatives who say their men are badly equipped, ill-treated and unprepared for battle.
Read in Russian | Читать по-русски
By

The artist and her cheerful band of fiddle players and guitarists created a surreal atmosphere in the military base outside St.Petersburg. On a large square surrounded by forest stood several hundred reservists lined up ahead of their deployment in Ukraine. A banner on site reads “Nobody are better than us.”

A video from the show is posted on the Telegram channel of Murmansk Governor Andrei Chibis.

The music was playful, the sky clear blue and trees dressed up in autumn colors.

But in the background loomed deadly seriousness. It was like a last artificial show of joy ahead of bloody battle, terror and death.

The warriors include men from the north Russian regions of Murmansk, Arkhangelsk and the Komi Republic, and several high-ranking regional officials were on site to bid their countrymen farewell. Among them was Andrei Chibis, the Governor of Murmansk.

According to the governor, the warriors from his region are being well equipped and get good treatment.

“I have brought here a truck full of additional equipment ,” he said in a statement.

At the same time he underlined that he is working to get his men sufficient body armor and helmets.

“We are dealing with this issue together with the Northern Fleet and the leaders of the Northwestern Military District, and I am confident that everything will be arranged by the time of their departure to the front,” he explained.

According to Chibis, the men from Murmansk are in a “fighting spirit.”

However, the statements from the regional leader do not correspond with the reality encountered by the troops themselves.

According to relatives, many of the mobilised men are ill equipped and have hardly gotten any military training ahead of their deployment on the battlefield.

Chibis is now challenged by mounting criticism from mothers and wives, and his social media accounts include abundant critical comments from locals.

According to one woman, the governor has “not provided the reservists with anything,” not body armour, nor helmets or first aid equipment.

“With what are they going to fight and protect the unity and sovereignty of the Russian Federation???” she asks on the governor’s VK page.

According to another woman, Chibis does not keep his promises.

“The men that were sent to St.Petersburg from Murmansk on the 27th of September were told that they would get body armour and helmets, but they are still waiting, they still have not gotten it from you [and] they are departing [to the front] already on the 14th,” she says.

“Where are the promises you gave them, that you “will not let them down”? she asks.

Others criticize the whole military operation.

According to a woman, the troops are given more training in digging trenches than fighting war.

“They are trained in how to dig trenches and not how to fight,” she says about reservists that undergo training in the Pechenga region.

Relatives also say that conscripts from the Kola Peninsula, not only contract soldiers and reservists, are sent to the border to Ukraine.

“I would like to know on what grounds conscript soldiers are sent to the border in Kursk region, without due experience and without resources for life existence. And for more than two weeks, they are sleeping in the open fields,” a woman writes.

Another local demands that the conscripts are returned home.

“Let the conscripts return to Pechenga, [after all] they are only digging trenches for their commanders on the border [to Ukraine],” the woman says.

The complaints from relatives are combined with numerous reports from soldiers. Many say they have been sent to the front almost without training and that equipment and armament is dire. Many also report about lack of food.

At the same time, the first reservists are getting killed in battle and sent to their home regions in body bags.

The criticism is clearly adding pressure on the governors, who have been commissioned by Putin to lead the work with the mobilization.

Andrei Chibis this week visited both the training camp in St. Petersburg and a base in Pechenga, near the border to Norway and Finland. He now tries to reassure his countrymen that all equipment is being provided. Including body armor and helmets.

“There can be no doubt that this is of supreme importance and vital for them. Therefore, following our meetings with the warriors, we have resolved the issue with delivery [of equipment],” he said.

According to Chibis, a total of 1000 reservists from the Kola Peninsula will be sent to the war.