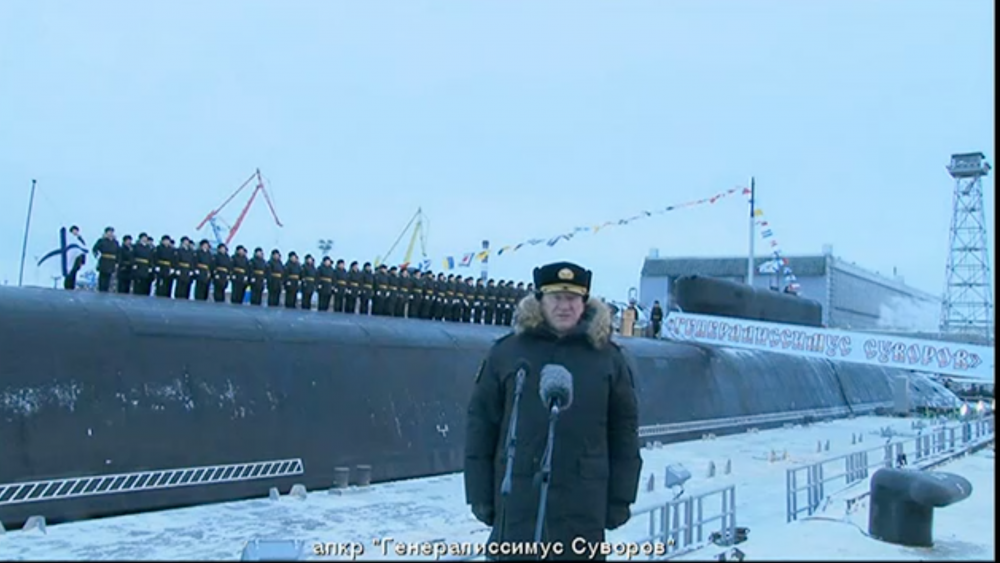 Russian navy commander Vice-Admiral Nikolai Yevmenov led the flag-hoisting ceremony for "Generalissimus Suvorov" as the submarine was handed over to the Pacific Fleet with the crew on deck. Screenshot from the televised ceremony by Kremlin.ru

Russia significantly increased its modern naval nuclear forces on Thursday as one new Borei-A class submarine was handed over to the navy at the shipyard in Severodvinsk.
Read in Russian | Читать по-русски
By

The navy flag was hoisted as the ballistic missile submarine “Generalissimo Suvorov” (K-553) was formally handed over to the Pacific Fleet from the Sevmash yard in Arkhangelsk region on December 29. Both President Putin and Defense Minister Shoigu took part from Moscow in the televised ceremony.

The submarine is the sixth of the Borei-class and third upgraded Borei-A. She carries up to 16 nuclear-tipped Bulava missiles and will sail to Rybachiy naval base at the Kamchatka Peninsula next summer in an interfleet transit via the Northern Sea Route.

Putin, who first ordered a massive upgrade of the country’s nuclear submarine fleet back in 2012, praised the work done by Sevmash.

“The latest nuclear missile carriers that are being designed and built there have no analogs in the world in many respects,” the President noted.

The sub, which is number sixth, will be followed by four more of the same class of 4th generation vessels, the first class of SSBNs designed and built after Soviet times. Borei- and Borei-A will replace the older Delta-IV class submarines in the Northern Fleet and the even older Delta-III class subs sailing with the Pacific Fleet.

The focus of the ceremony shifted from the quay under the Polar Night in the North Russian closed city by the White Sea to the inside of the giant ship hall at Sevmash. Here, a bottle of champagne was smashed into the rudder in the rear of “Imperator Aleksandr III”.

The propeller was covered to hide its features from the TV cameras and attending official journalists. It is, however, known that the Borei-class submarines are the first in Russia to run with a pump jet propulsion system powered by an OK-650 reactor.

From the ship hall, the “Imperator Aleksandr III” will now be floated out on the water before factory trials, including weapons testing in Russia’s northern waters.

The three last Borei-A class submarines; “Knyaz Pozharskiy”, “Knyaz Potemkin” and “Dmitry Donskoy” will according to the plans be commissioned in 2024, 2028 and 2029. All three are to be deployed to the Northern Fleet with Gadzyievo on the Kola Peninsula as home base.