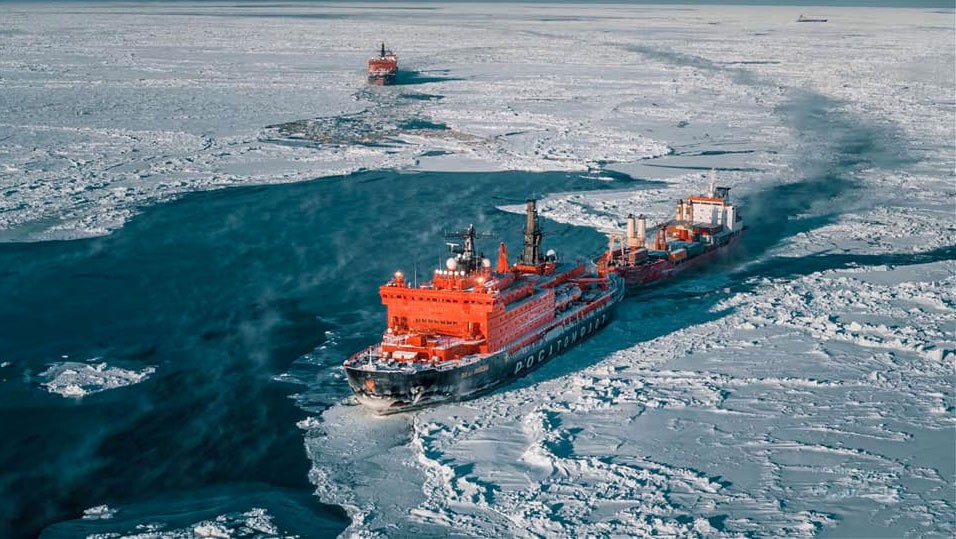 Ice lies thick over Russian Arctic waters, but this winter might be record warm

Ship captains are battling with major volumes of sea-ice across the Russian far north. But the troubled navigation notwithstanding, temperature data show that the Arctic has almost never before been this hot.
Read in Russian | Читать по-русски
By

The coldest period of the year is setting in across the Arctic. Waters are long frozen, and now the layers of sea-ice grow to the seasonal high. But the temperatures in the far north are not as freezing as they use to be.

According to the Russian meteorological service Roshydromet, the year 2022 was the second warmest on record in Russia. All of the country’s eight federal districts were abnormally warm. And the biggest deviations from the norm were found in the North.

Temperature data show that parts of the Kara Sea were an average of 5°C above normal, and that all of the archipelago of Novaya Zemlya, the Taimyr peninsula and Yamal Peninsula were about 4°C above normal. Major parts of the Barents Sea and the Laptev Sea were 3 degrees above the norm.

Other parts of the Arctic experienced a similar trend. Parts of the Canadian far north were in 2022 about 3°C warmer than normal. The same goes for Norway’s Svalbard archipelago.

A number of extreme phenomena were registered across the region, among them a 6-8°C above average temperature in the East Siberian Sea in December.

The high temperatures are accompanied by dramatic melting of the sea-ice.

According to the U.S National Snow and Ice Data Center, the average Arctic sea ice extent for December 2022 was 11.92 million square kilometers, which is the seventh lowest in the satellite record for the month.

Maps from the Norwegian Meteorological Institute show that the waters north of Svalbard in mid-February 2023 were still ice-free. Judging from the data, the ships operating in the area will encounter sea-ice only at about 82° North.

However, far from all Arctic waters have thin ice and smooth conditions for sailing. In the eastern part of the Russian Arctic have accumulated major volumes of multi-year old ice that is unbreakable without assistance from powerful icebreaking vessels.

Data from the Russian Arctic and Antarctic Research Institute show that a belt of multi-year ice covers major parts of the Laptev Sea, as well as the East Siberian Sea.

The difficult sea-ice conditions are significantly troubling shipping through the region, and almost no vessels have made it across the waters since October.

The only exceptions are a few LNG carriers that have sailed from Sabetta in Yamal Peninsula to ports in China. However, also these powerful icebreaking tankers have needed assistance from nuclear icebreakers.

The Boris Vilkitsky in January crossed the route from Tianjin, China, to Sabetta and was escorted by icebreaker Arktika through the Laptev Sea and into the Kara Sea.

On the 19th of January, the two ships were sailing together north of the Taimyr Peninsula.

The thick sea-ice creates troubles for Russia and its ambitious plans for year-round shipments on the Northern Sea Route. Even with escort from nuclear-powered icebreakers, there are serious risks related with shipping through the region.

Russia is significantly boosting its icebreaking capacities, but even with its projected fleet of seven LK-60 vessels shipping through the Laptev Sea and East Siberian Sea will pose challenges that ultimately might be considered too big by the shipping companies.