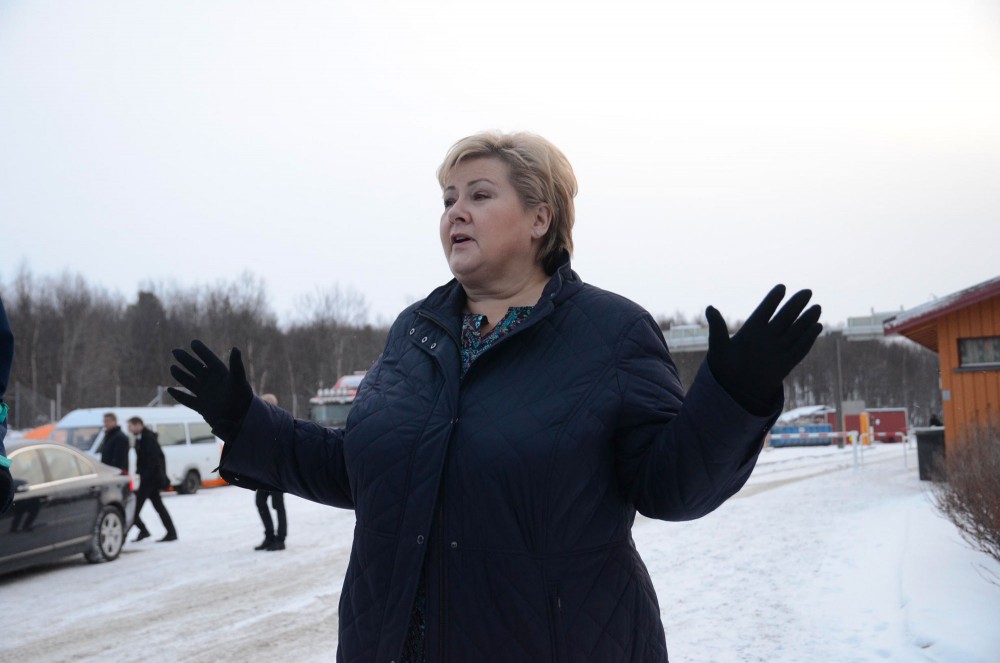 A sharp change in Norway's relationship with neighboring Russia stands a the core of the Prime Minister's new policy document.
Read in Russian | Читать по-русски
By

“The global security situation has become more complex and tense,” the Norwegian premier underlined as she on the 27th November presented her country’s new key Arctic document.

The new white paper titled “People, opportunities and Norwegian interests in the Arctic” highlights investments in northern communities and development opportunities for youth. But the main message of the document is that the High North in the course of few years has undergone dramatic changes and that the relationship with Norway’s powerful eastern neighbor is completely altered.

When the Norwegian government in year 2011 presented its previous white paper on the Arctic, Russia was seen as a partner with whom Oslo could engage in a wide range of ambitious joint projects. Back then, Jens Stoltenberg was prime minister of Norway, and the document included the vision of then foreign minister Jonas Gahr Støre about a relationship with Russia that gradually should become open and trustful like between the Nordic countries.

The whopping change since 2011 is highlighted also by Foreign Minister Ine Eriksen Søreide.

“The world has changed since Norway’s last white paper on the Arctic was published nine years ago. It was necessary to update our understanding of the key challenges and opportunities in the north. The security situation in particular has changed considerably since 2011, and new analyses were needed. This has been an important part of the work on the new white paper,” Eriksen Søreide said in her presentation of the document.

Søreide made her presentation of the Arctic policy in the northern town of Alta, in a cosy surrounding of a winter camp inspired by Sámi handicraft and tradition. In a broadcasted show, several ministers were interviewed along with local business developers and youth representatives.

But the substance of the white paper first of all tells a story about a new and serious situation in the High North.

“We are facing an assertive Russia and activities from new actors,” the foreign minister says. She underlines that the High North is the government’s strategically “most important region of responsibility,”

The 193 page paper touches on a significant number of various issues. But it is the chapter about national security that is placed first in the document.

The authors argue that “Russian build-up of forces and military modernization could directly challenge Norwegian and allied countries’ security.”

At the same time, the document highlights that not everything is negative. Norway and Russia continue to cooperate on issues such as fisheries, nuclear security and environment, as well as in multilateral arenas like the Arctic Council and the Barents Cooperation.

When Norway launched its 2011 white paper, the two countries had just recently with great success managed to delineate vast waters in the Barents Sea. Trust had built up over more than 20 years and the government in Oslo was confident that the time had come for huge joint industrial projects with Russian partners.

The introductory part of the document highlighted that “the relationship has in the course of two decades moved from Cold War confrontation to a relationship of growing trust, more contacts and expanding cooperation.”

“In this period, the mistrust of the Cold War has to a large extent been replaced by normal and good neighborly relations,” the authors of the paper underlined.

The document outlined grand opportunities for Norway and Russia to develop a “new industrial era” in the north, and a new “energy region in Europe”.

Oil and natural gas was a key part of it all, and Norwegian state companies were actively involved in getting stakes in what was believed to become vastly lucrative projects in Arctic waters, both on the Norwegian and Russian sides of the border.

That same year, the oil price peaked to an average record high of $111 per barrel.

The white paper outlined what appeared as an endless line of opportunity.

“It is now natural to look ahead, and Norway will take the initiative to author a new Declaration of Cooperation that gives vision and direction for the next 20 years of cooperation,” the document reads and outlines areas such as the mineral industry, people-to-people cooperation, integration of labor markets, and enhanced coordination within education, environment and research as priorities.

The Barents Cooperation remains a priority for the Norwegian government. But also here there is a significant shift. Although being 40 pages shorter than the 2020 white paper, the 2011 version mentions the word Barents a total of 291 times, while the latter — only 160 times.

Similarly, in the 2011 paper the Norwegian Barents Secretariat was highlighted 12 times as a key tool for development of cross-border regional relations with Russia. Nine years later, the project grant-giving organization that is owned by the two northernmost Norwegian counties is shortly mentioned only twice.

In 2011, few would have imagined the soon-to-come turn of developments. In its long-term forecast for the period until year 2030, the report reads that “the past 20 years have seen an overwhelming development in the north, but history might ultimately show that we in 2011 stood only at the threshold of the Decade of the High North.”

The authors of the report might get their predictions fulfilled. But in a very different way. The importance of the High North is indeed growing. But not in that spirit of cooperation and joint interest.