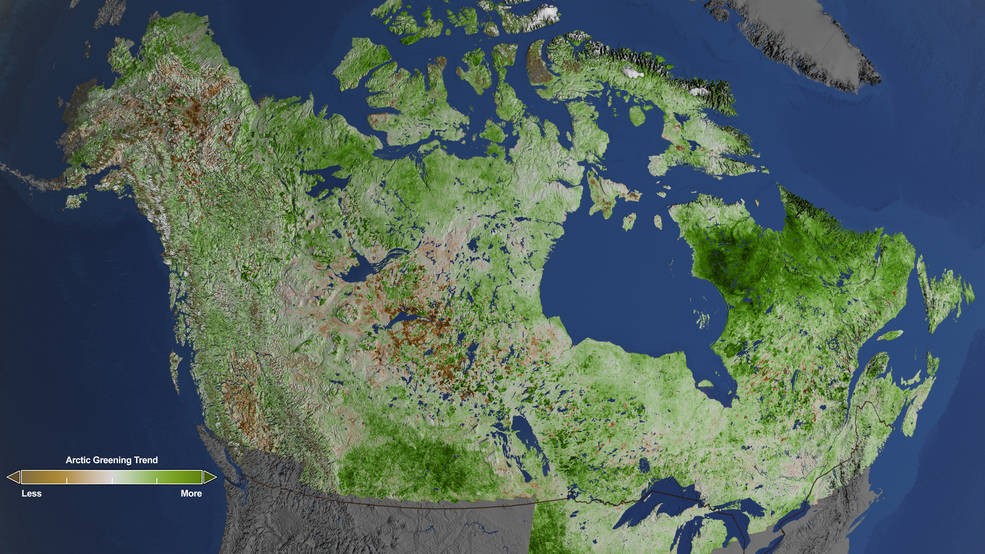 Scientists and residents of Canada’s far north have been noting changes in the Arctic for many years: more plants, more shrubs and trees, and more appearances of southern animals, birds, insects, and marine life which had never been seen before in the north. Now NASA’s satellite analysis confirms it.
Read in Russian | Читать по-русски
By

As the far north warms as a result of climate changes, plants are moving north as well, “greening” the far north.

It also shows that the boreal forest is “browning” as a result of hotter and drier weather.

NASA analyzed some 87,000 images captured by the Landsat satellite showing a trend towards much more plant life across the north. Their findings were reported in the science publication Journal of Remote Sensing under the title “The vegetation greenness trend in Canada and US Alaska from 1984–2012 Landsat data.”

The data shows that about a third of the previously mostly barren tundra has become covered with plants. Areas that were previously grassland showed small shrubs had moved in, and in turn larger shrubs then took over even as the grasslands and other small plants moved further north.

“The greening is unmistakeable,” the scientists wrote in the April 16 paper.

Conversely the warming was having a negative effect on the boreal forest where more heat and drought reduce productivity.

Quoted by Post Media, Scott Goetz, deputy director and a senior scientist at the Woods Hole Research Centre in Massachusetts, said the study shows “a clear distinction” between what’s happening in the tundra and Boreal regions of Canada and Alaska.

“Trees in the boreal system do not respond well to high temperatures,” he wrote in an email to the National Post.

The changes will also affect water, energy, and carbon cycles.  That was the subject of another related study from the U.S.Geological Survey which said that a warming Arctic could release massive amounts of carbon stored in the Arctic soil and permafrost. Although focused on Alaska, the scenario applied widely across the Arctic.