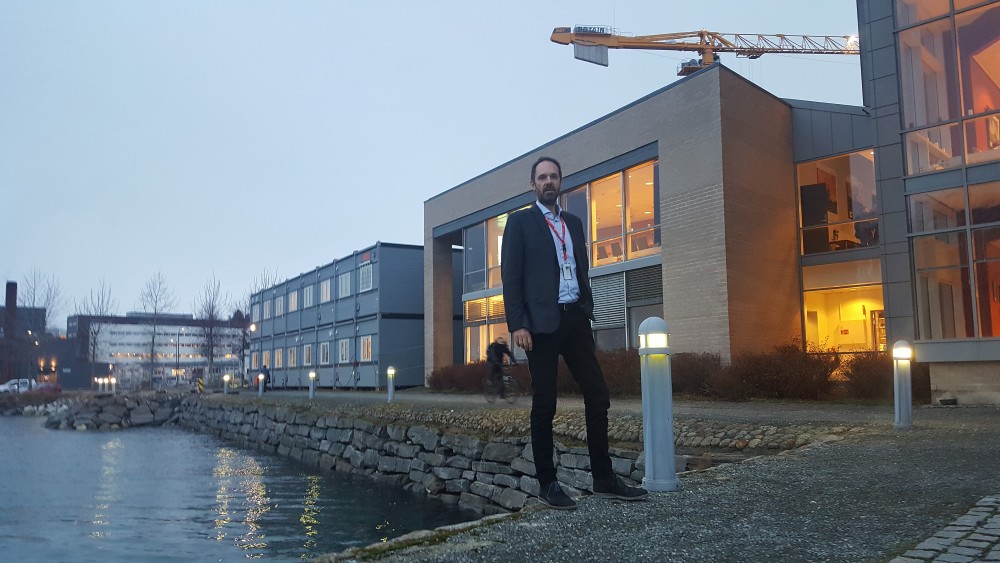 Jan-Gunnar Winther infront of the Fram Centre. The new building under construction in behind. Photo: Thomas Nilsen

«We have consistently and severely underestimated the rate of climate change,» says Director Jan-Gunnar Winther of the Norwegian Polar Institute.
Read in Russian | Читать по-русски
By

Ground level of the Fram Centre’s building phase II is 90 centimeters higher then the first building that opened in 1998.

«We had no idea that the effects of climate changes could be this dramatic,» says Jan-Gunnar Winther with the Polar Institute, one of the institutions sharing offices and research labs at the Fram Centre by the sea side in Norway’s Arctic capital Tromsø.

Fram Centre is the short name for FRAM - High North Research Centre for Climate and the Environment.

Director Winther says the shock came some years ago when the polar library, located on the ground floor, nearly got flooded due to extraordinary high tide during a storm. The library holds some of Norway’s most valuable records of historic books by polar explorers like Amundsen and Nansen.

With the second building now under construction, the centre will host some 500 employees and be one of the world’s most comprehensive centre’s for climate and environmental research.

When the cocktail of climate, nature and Arctic society researchers moved into the first office building nearly 20 years ago, nobody predicted the construction to be threatened by floods. Now, the old building will also get 90 centimeters higher protection level against sea water.

Phase II now under construction has a long list of improvements adopting the building to the severe climate changes happening in the Arctic. The measures include better waterproofing and a two-stage sealing of all structures, extra drain securing, stronger roof, improved membranes, better run-off for rainwater and an architecture made to avoid places for snow accumulation.

Who knows how the weather along the cost of northern-Norway will be like some years from now? This winter has been extraordinary warm and wet.

All technical facilities that normally are on the ground floor will be placed in the roof. Rising tides, rising sea level; this building is ready to meet a wild future.

In addition to providing better space for the 20 institutions already in place at the Fram Center, Norway’s Institute of Marine Research will move in when the new part is ready.

With melting sea ice in the Arctic, way more open waters will be available for economic activity. For the Norwegian Government, that are funding the expanded Fram Center, natural resources and the knowledge to and expertise required to create value from those resources are of particularly importance for the country’s economy.

Jan-Gunnar Winther says the dramatic changes seen in the Arctic will force everyone to think twice before building anything near the sea side or in alpine landscape exposed to damages from more sever weather conditions.

«Here in northern Norway as an example, I would not invest in downhill skiing by the coast. Who knows if there are any snow there in the future?,» the Polar Institute Director says.

Climate changes and its dramatic effects in the north will next week literally speaking be up for a «hot» debate in Tromsø when the annual Arctic Frontiers conference takes place.

Entitled «White Space - Blue Future» the paricipants at Arctic Frontiers will discuss the gaps in knowledge about the Arctic oceans and the role these will play in the future.

«We have over the past 10 years consistently and severely underestimated the rate of climate change,» says Jan-Gunnar Winther.

The Greenland ice sheet is now losing mass at a rate which is six times higher than 10 years ago. Exact contribution of melting glaciers to sea level rise in the future remains uncertain, but researchers believe it will be significant.

Some scientist claim we must expect more than half a meter sea level rise at the end of this century. If completely melted, the volume of the 1,7 million km2 Greenland ice, at some places up to 3 km thick, could cause global sea level to rise by several meters.

Due to persistent circulation patterns in the atmosphere and the ocean, sea level rise will be distributed unevenly around the globe. Also, another reason to concern is warmer water. As the ocean warms up, like in the Barents Sea and Arctic ocean over the last few years, warmer water takes up more space and could cause sea level rise.