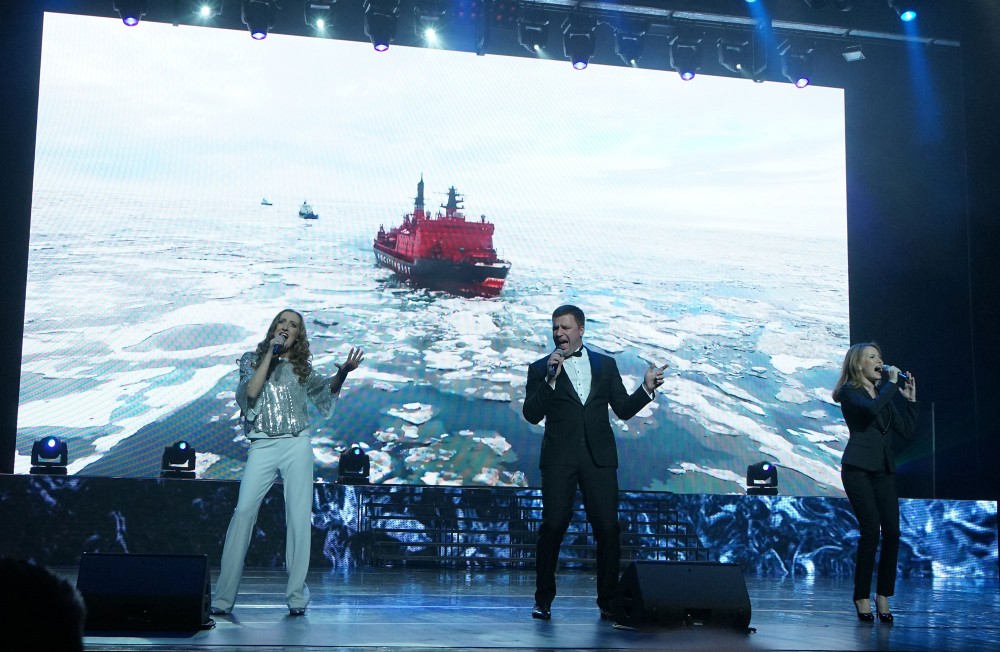 Song devoted to the Russian Arctic performed during a conference in 2018. Photo: Atle Staalesen

A global heatwave is gaining force and the Russian government appears to acknowledge that its Arctic will be among the regions worst hit. But the country’s response is not combat of climate change, but rather adaption to the new reality.
Read in Russian | Читать по-русски
By

The Russian parts of the Arctic are among the areas with the biggest average temperature increase in the world. Data from the country’s meteorological service Roshydromet show that the areas around Arctic archipelagos of Franz Josef Land and Novaya Zemlya were an average of 4 °C above normal in 2018. The same situation was found off the Arctic coast of Chukotka, the researchers say.

The year 2018 is likely to be another top five warm year in Russia. Nine of the ten warmest ever years in the country have been in this century, and the two record-beating years are 2007 and 2017. And it is the Arctic that provides the most extreme trends. According to the institute, the average annual temperature in the region has over the last 20 years increased with 0,9 degrees. And in parts of the region, far more. In the Kara Sea, the average temperatures since 1998 have increased with as much as 4,95 C degrees. In 2017, the most staggering deviation was found in the Kara Sea in March month, the researchers say. Then, average temperatures were as much as 13 degrees higher than normal.

The meteorological institute now warns that the rapidly growing temperature increase could have dramatic effects on life in the north. That message is sent to decision makers in Moscow.

Two weeks ahead of this year’s major UN climate summit COP24 in Katovice, Poland, Russian Presidential envoy on climate issues Ruslan Edelbergiev assembled representatives of key government ministries to address the looming threats. The result from that meeting was the decision to adopt a plan for adaption to the warmer climate.

The plan will be based on a document elaborated by the Ministry of Economic Development and serve as guideline for ways to adapt in time of climate change, a note from the Kremlin reads.

According to Roshydromet leader Maksim Yakovenko, the climate adaption plan will include measures on how to avoid negative consequences on economy, industry and other sectors. Among the potentially devastating elements are effects on permafrost melting on infrastructure located on the tundra.

A 2017 climate report from the institute includes alarming data about the permafrost melting. According to the researchers, all measuring points in the country’s European parts of the Arctic in 2017 saw a shrinking of the permafrost layer by about 10 cm. The biggest melting was observed at measuring point in the Pechora River delta, where the decrease was as much as 33 cm.

At the same time, extreme weather is getting more frequent. According to Yakovenko, the number of cases of extreme weather conditions in the country has over the last few years more than doubled. Previously, there were about 400 cases per year, now there are more than 1,000, he told news agency TASS.

However, Yakovenko and other leading Russian researchers see not only negative consequences. According to Sergey Semenov, national coordinator for Russia’s participation in the Intergovernmental Panel on Climate Change (IPCC), there are also positive elements connected with the changing climate. In an interview with an information bulletin issued by Roshydromet, Semenov makes clear that the melting of ice on the Northern Sea Route will have clear positive economic effects, as it opens up for new opportunities in shipping.

Semenov also says climate change ultimately could open up for more agriculture in the country’s north.