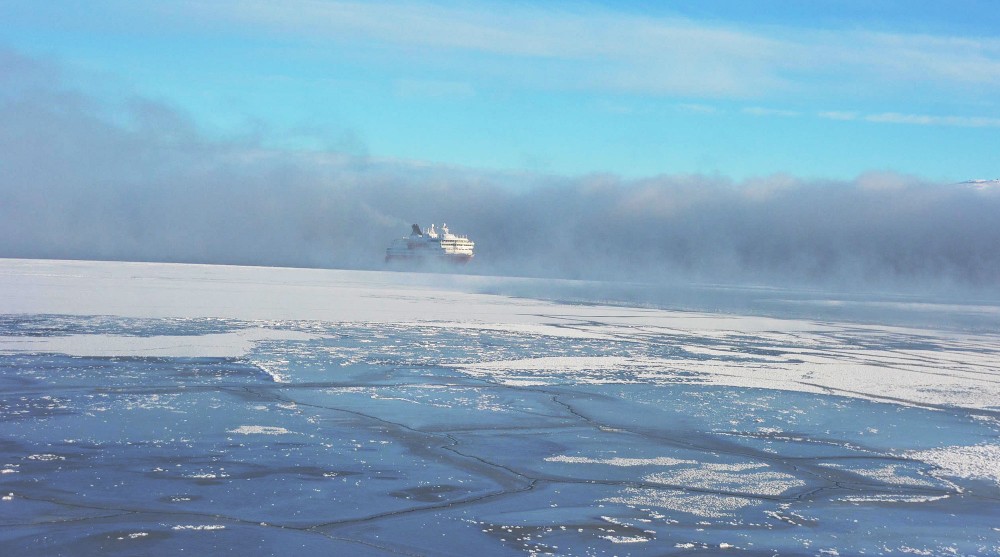 The Barents Sea is getting significantly warmer, but there are still short-term variations, researchers say. Photo: Atle Staalesen

Data from the past five years show that the Barents waters have became colder and more icy.
Read in Russian | Читать по-русски
By

The long-term trend is undisputed. The Barents Sea has become significantly warmer. Like the rest of the Arctic.

But the short-term change is different. Data assembled by the Norwegian Institute of Marine Research show that the Barents Sea over the last five-year period actually has become colder.

According to the researcher, the recent temporary cooling follows the influx of less warm Atlanticwater from the Atlantic Sea.

With the less warm Atlantic water, and northerly winds, has come also more ice, and sea-ice concentration data from satellites show that the Arctic sea-ice edge is variable but has expanded southwards in winters after 2016. That is reflected also this winter. Ice maps from the Norwegian Meteorological Institute show that large most parts of the Svalbard archipelago in early March were embraced by sea ice.

It is not only the incoming Atlantic water that influences sea-ice conditions in the Barents Sea. Also wind directions and drifting ice from the east and north have major significance, Randi Ingvaldsen explains.

And there will always be natural fluctuations in regional sea water temperatures.

“It is well known that the Barents Sea over the last 40 years has become much warmer, [and] the cooling of the last years is part of natural fluctuations that will always be there,” the researcher says.

Also Sigrid Lind from the Norwegian Polar Institute underlines that the ruling trend is one of significant warming in the Barents Sea, but that there are still short-term variations.

“When the climate gets warmer, the short-term fluctuations continue, but the peaks and lows in ocean heat both become higher,” she says to the Barents Observer.

Lind is leading researcher on oceans and Arctic sea ice and explains that the situation in the northern parts of the Barents Sea is different from in the south.

“Fluctuations in Atlantic waters are found also in the northern part of the Barents Sea, but here the oceansea is stratifieddivided in layers with Arctic water above the Atlantic water,” she says.

According to Lind, the ocean layers in the northern parts of the Barents Sea are affected by the melting of Arctic sea-ice.

The trend of less sea-ice inflows from the Arctic is likely to continue, however, there may still be years with large sea-ice inflows due to short-term fluctuations, she adds.

The past decades have seen a dramatic increase in Arctic air temperatures. In Longyearbyen, the small town in Svalbard, average temperature has increased with 5,6 degrees Celsius since 1961.

The same trend is seen across the Russian Arctic. A new climate report from the Russian meteorological institute Roshydromet states that the polar parts of the country have become almost 2,3 degrees warmer over the past 30 years.

And in parts of the region, the heat is gaining breath-taking force. In the Kara Sea, average air temperatures in the period 1998-2018 were as much as 4,77 degrees above normal. In 2018, the biggest temperature deviation was found in the far eastern Chukotka Peninsula where the weather was 3,9 centigrades warmer than normal.

At the same time, the Arctic ice has shrunk considerably. The extension of the polar ice in the area is now four times less than in the 1980s, the Russian report reads.

“We are now working to better understand the links between a changing ocean stratification and atmospheric warming in the Arctic”, Lind adds.