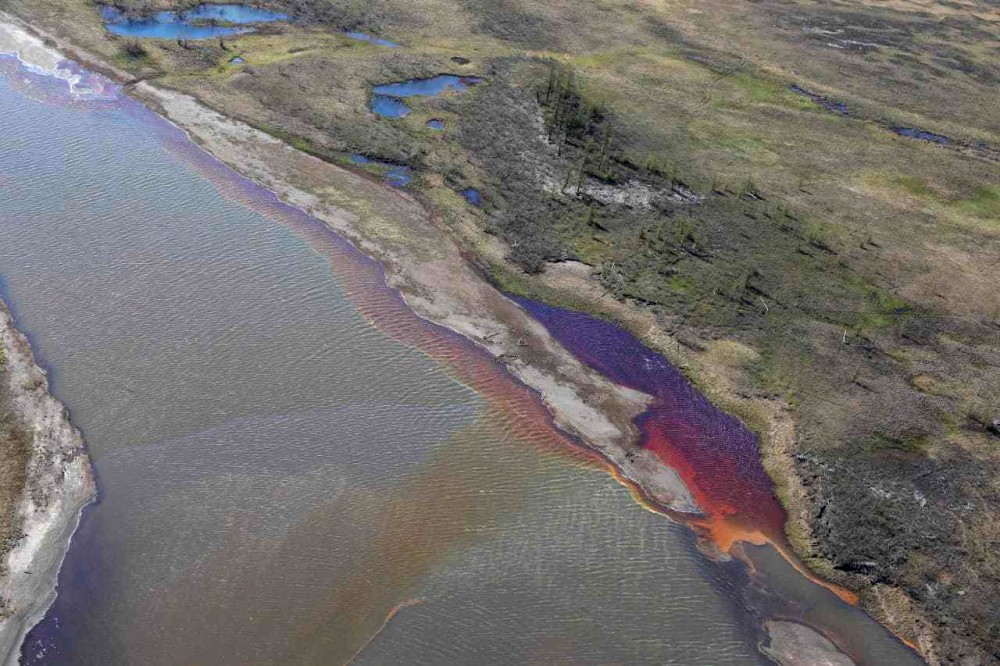 More than 20,000 tons of diesel fuel has spilled out over a large area in the Taymyr Peninsula. Photo: rskstate.ru

Large territories of rivers, streams and tundra lands are covered by more than 20 thousands tons of diesel oil from a reservoir owned by company Nornickel. The catastrophe was reported to the authorities only two days after the spill and nobody really knows how to clean up.
Read in Russian | Читать по-русски
By

A thick layer of diesel oil now covers more than 20 km of rivers around the installations of the Norilsk-Taymyr Energy Company.  Practically all rivers and affluent creeks are filled up by oil products, leader of Russia’s Federal Environmental Control Service (Rosprirodnadzor) says after a visit on site.

According to Radionova, about 6,000 tons of diesel oil has spilled into the tundra and  another about 15,000 tons have ended up in the local waterways.

A layer of diesel oil as thick as 20 cm is found by the oil booms put out on the local river about 20 km away from the site of the accident, the leader of Rosprirodnadzor says.

“We are now identifying damage and potential consequences for the waters, as well as the soil,” she explained to the President.

The accident took place in the morning of the 29th of May, but was reported to the authorities only on the 31st of May. Neither the Norilsk-Taymyr Energy Company, nor its mother company Nornickel had published any official information about the spill until 3rd June, and the regional authorities in the Krasnoyarsk Kray put out a small notice only on that same day, at the same time as regional Governor Aleksandr Uss was ordered to report to the President.

City authorities in Norilsk on the 1 June issued a small notice about the spill, but gave no details about the magnitude of the accident.

A team of more than 300 personnel, most of them from the Ministry of Emergency Situations (Emercom), is now on site to clean up.

Emercom leader Yevgeny Sinichev says that the spill came as the ground under the reservoir sunk and subsequently ruined the foundation of the installation.

According to Sinichev, the spill was followed by the breakout of fire on site. Worst hit are the rivers of Daldykan and Ambarnaya. Emercom was informed about the accident only on the 31st May, he told President Putin.

More than eight tons of equipment, including oil booms, has been brought to the area, as well as two tons of sorbent materials.

The late reporting about the accident has stirred major frustration among federal authorities. In Wednesday’s meeting, Vladimir Putin aimed stern criticism against regional Governor Aleksandr Uss for his handling of the case.

Putin was also highly dissatisfied with the report given by Uss in the meeting.

“What kind of report is this?” Putin asked and added: “But what to do now? After all, you are the governor.”

“In your opinion, what happened and why did the authorities get to know about it only after two days? Are we really going to learn about emergencies on social media?” Putin asked the governor.

And he did not stop with that. “Is everything ok with your health?” Putin asked the governor and made gestures indicating that Mr Uss was mentally ill.

How to clean up?

The major spill is located in remote Arctic territories with little infrastructure and the authorities are at odd over how to clean up. None of the participants in the meeting with Putin offered any clear solution.

According to Governor Uss, there is no way to deposit the diesel oil cleaned up from the river. There are no roads in the area and the rivers can not be reached by bigger boats.

“Our main proposed solution is to burn the collected oil products,” Uss said, but admited that his region does not have experiences from burning such large quantities of oil.

That solution is however disputed by Minister of Natural Resources Dmitry Kobylkin. “I can not imagine how we can burn such volumes of fuel in the Arctic zone of our country,” he said.

“Such a fire over such a territory […], I believe it would be a major problem,” Kobylkin underlined to the President.

The natural resource minister argues that Nornickel and its subsidiary will not alone will capable of handling the clean-up and proposes to engage the Ministry of Natural Resources and possibly also the Armed Forces.

In the video meeting was also Minister of Energy Aleksandr Novak, who recommends the inclusion in the process of the country’s oil companies.

“They might previously have encountered similar situations and possibly have experiences, and could offer assistance and support in the development of measures connected with the liquidation of consequences,” Novak said.

The Taymyr tundra is from before heavily affected by the industrial activities of mining and metallurgy company Nornickel and pollution in parts of the area is significant.

In a short comment made on 3 June, the company informs that 262 tons of diesel oil has been pumped out of the local waters and that 800 cubic meters of polluted soil has been removed.

The company also says that it is checking all its other storage sites for diesel fuel and pays special attention to possible risks of sinking ground triggered by melting permafrost.