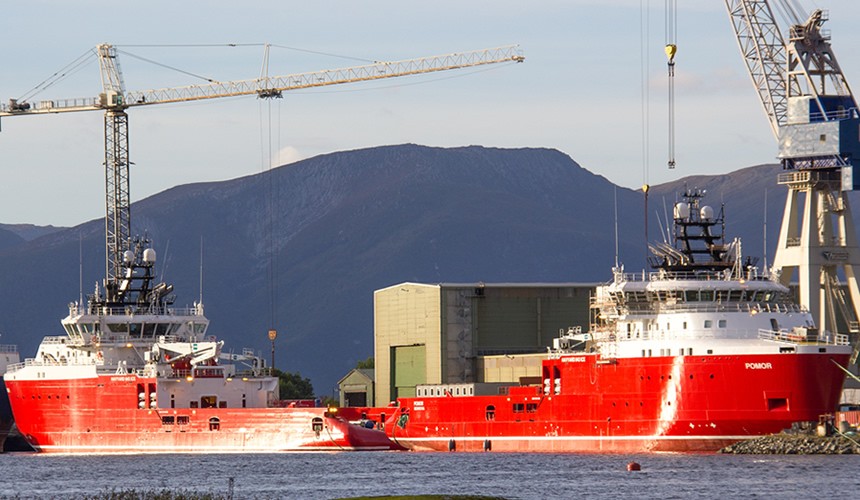 The «Pomor" and «Normann» will make it autonomously from Norway to Russia's Pacific coast. Photo: Havyard.com

They will depart in November and sail without escort from Russian icebreakers, the Norwegian yard says.
Read in Russian | Читать по-русски
By

The ships named «Pomor” and «Normann» are built by the Norwegian yard Havyard on a contract with Femco, the Russian shipping company. They are both anchor handling tug supply vessels (AHTS) with icebreaking capacities, and will operate in the waters outside Sakhalin, in Russia’s far east.

Havyard press spokesperson Julianne Gjelseth says to the Barents Observer that the ships will be sent through the Northern Sea Route in early November. They will make the voyage alone, without assistance from a Russian icebreaker, she confirms.

The «Pomor» and «Normann» are part of a series of icebreaking vessels built by Havyard for Femco. Last fall, the first ship, the «Aleut» was delivered to the Russian company.

The 86 meter long, 19 meter wide vessels are made for operations in down to minus 30 degrees celsius. They can break up to one meter thick one-year old ice, the company informs.

Figures from the Russian Hydrometeorological Service show that ice conditions along the Northern Sea Route is quickly getting more complicated. In the waters around the New Siberian Islands, ice layers are now up to 30 cm thick.