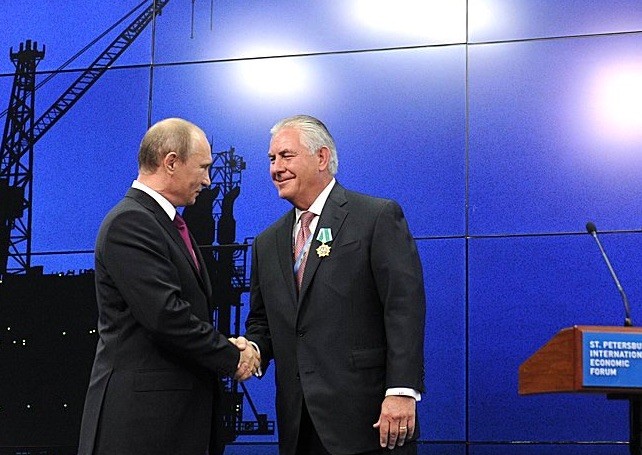 Vladimir Putin gives the Order of Friendship to Rex Tillerson in 2013. Photo: Kremlin.ru

«With impatience, we are waiting for an opportunity to return to Russia», Tillerson told an online Russian newspaper earlier this year. According to Lenta, the American oilman No 1 is ready to re-engage in Russia as soon as sanctions are lifted

That opportunity for re-engagement could come soon enough. When installed as Secretary of State in January, the powerful ExxonMobil leader will have the possibility to alter US-Russian relations and seek an end to the sanction regime which for the last two years has stalled international energy projects in the Russian Arctic.

ExxonMobil is among the foreign companies with the biggest stakes in the Russian North, and Tillerson is the man behind it all.

After having successfully developed the Sakhalin-1 project on Russia’s Pacific coast, the company in 2011 signed a comprehensive Arctic cooperation deal with Rosneft. That includes three huge licenses in the Kara Sea, as well as stakes in Western Siberian fields and a project in the Black Sea. In 2013, the cooperation was extended with another seven licenses in areas stretching from the Kara Sea to the Chukchi Sea. The total area covered by the Arctic licenses increased to more than 725,000 square kilometers.

An important milestone for the Russian-US partnership came just weeks before American and European authorities extended their sanctions on Russia in 2014. Then, the Norwegian-owned drilling rig «West Alpha» made a significant discovery in the partnership’s first well, the Unversitetskaya-1. The well holds more than 120 million tons of oil, results showed.

Rosneft President Igor Sechin decided to name the field «Pobeda» (Victory). In a statement, Sechin said the operation was the result of joint efforts.

«This is our united victory, it was achieved thanks to our friends and partners from ExxonMobil, Nord Atlantic Drilling, Schlumberger, Halliburton, Weatherford, Baker, Trendsetter, FMC. We would like to name this field Pobeda,” Sechin underlined.

Russian President Putin granted the projects his full support. As the “West Alpha” spud the Unversitetskaya-1,  Putin in a direct televised transmission praised the good relationship with ExxonMobil.

«Today, efficient international cooperation lies to the ground for commercial success, and the businesses, both Russian and foreign companies, perfectly well understand this», Putin underlined, a transcript reads.

«Irrespectively of the current troublesome political state of affairs, pragmatism and common sense prevails, and this is gratifying», he added.

«In our opinion, this is a truly responsible, truly business-like approach, and only this approach can be productive».

The American company got a 33,3 percent stake in the project operating companies, among them Karmorneftegaz, the joint venture established for the development of the Kara Sea licenses. As part of the deals, Exxon took on costs for exploration.

That did not come cheap. According to unofficial estimates, costs for the drilling of the Pobeda well alone amounted to about $600 million.

More drilling was supposed to follow. License obligations include another 14 wells and significant 2D and 3D seismic mapping. That, however, was put on hold because of the sanctions. However, contacts between the companies did not stop.

Over the last two years, significant parts of the companies’ joint license areas have been subjected to seismic mapping.

In addition, the two companies have together established the Arctic Research & Design Center, a St. Petersburg-based entity for research, development and technical services for Arctic oil and gas development. ExxonMobil pledged $200 million in funding for the center’s initial research work.

Resources are abundant. According to Igor Sechin, the oil resources of the Kara Sea alone exceed the ones of the Bay of Mexico, Brasilian shelf, Alaska and northern Canada and can be compared with the resources of Saudi Arabia.