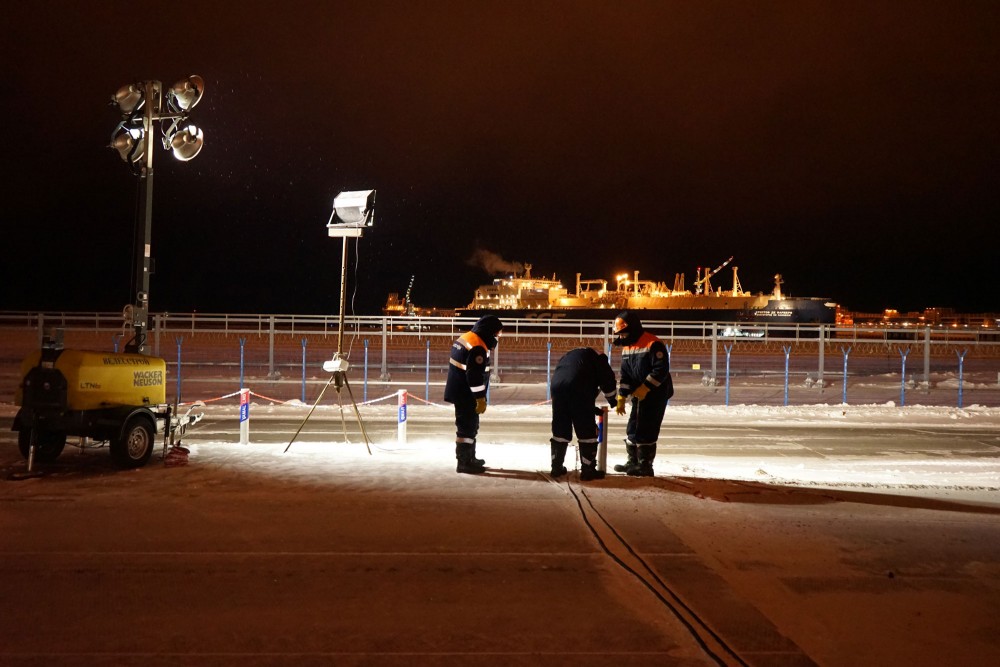 As the Yamal LNG comes into full production, the next major project - the Arctic LNG 2 - is under development. Photo from Sabetta: Atle Staalesen

The French energy company ties a key part of its future to the large natural gas reserves in the Russian Arctic peninsulas of Yamal and Gydan. Company Chairmans and CEO Patrick Pouyanné on Tuesday this week met in Moscow with Novatek’s Board Chairman Leonid Mikhelson in connection with the signing ceremony on Arctic LNG 2, the major new LNG project now in the making in the Russian Arctic.

Total gets a direct 10 percent interest in the project, the company says. But that is not all. Taking into account the company’s 19.4 percent ownership in Novatek and Novatek’s intention to retain 60 percent of the project, Total’s overall economic interest in the LNG project will be approximately 21.6 percent. The Frenchmen will also have the possibility to increase their direct share in the project up to 15 percent.

In addition comes significant rights over other future projects in the region. Novatek and Total have agreed that Total will have the opportunity to acquire a 10-15 percent direct interest in all Novatek’s future LNG projects located on the Yamal and Gydan peninsulas, the French company informs.

«We are delighted to have concluded the definitive agreements for our entry into this new world class LNG project based on the vast Russian gas resources alongside our partner Novatek,» says CEO Pouyanné. «Arctic LNG 2 builds on the success of Yamal LNG and will introduce several innovative solutions to further increase competitiveness,» he underlines in a comment.

«The Arctic LNG 2 fits into our strategy of growing our LNG portfolio through competitive developments based on giant low cost resources primarily destined for the fast growing Asian markets.»

The signing of the deal did not come without troubles. According to newspaper Kommersant, the Russian Federal Anti-Monopoly Service threatened to block the deal and demanded that it was to be assessed by the Government Commission on Foreign Investment. That could have resulted in a major delay in project development.

Company Total is from before a major stakeholder in the vastly rich natural gas region. It holds a 20 percent stake in Yamal LNG, the project that now has reached its annual target production of 16,5 million tons.

The Arctic LNG 2 will produce a projected 19,8 million tons of LNG per year. It will be based on the resources of the Utrenneye natural gas field in peninsula Gydan. The project, which will be unfolding on the eastern shores of the Ob Gulf, includes three development trains of 6,6 million tons of LNG each. The natural gas will be shipped out through ice-covered waters with a new fleet of ice-class carriers to buyers in Europe and Asia.

«We are happy to continue our joint work in the new project Arctic LNG 2», says Novatek leader Mikhelson. «We have successfully cooperated with Total for many years and created good working relations based on mutual trust and respect,» he underlines.

According the press releases issued by the companies, production at the Arctic LNG 2 will be launched in 2023. However, in a recent meeting with President Vladimir Putin, Novatek chief Mikhelson made clear that the launch date will be already in 2022.

A key part of the Arctic LNG 2 project is the ongoing building of the Belokamenka plant in Kola Bay near Murmansk. The plant will build production platforms that when ready will be towed to the production site. The platforms are based on so-called gravity-based structures. Proportions are massive. According to Mikhelson the installations will be more than 300 meter long, 150 meter wide and 70 meter high.

Two major docks are to be built in Belokamenka. The company is investing about 120 billion rubles in this part of the project alone, the Novatek leader told Putin.

The deal with Total could ultimately help open the door for other investors. Novatek is reportedly in talks with several more companies, among them the CNPC, Saudi Aramco, Mitsui, Mitsubishi и Kogas.

The development of the Arctic LNG 2 is already underway. On project site in Gydan the planning of the new Utrenneye port terminal is advancing. Major dredging operations in the adjacent waters of the Ob Bay will be necessary.

The Utrenneye port will stretch 3 km along the coast of the remote Arctic lands. Several major infrastructure objects are to be constructed, among them a nearby new airport.