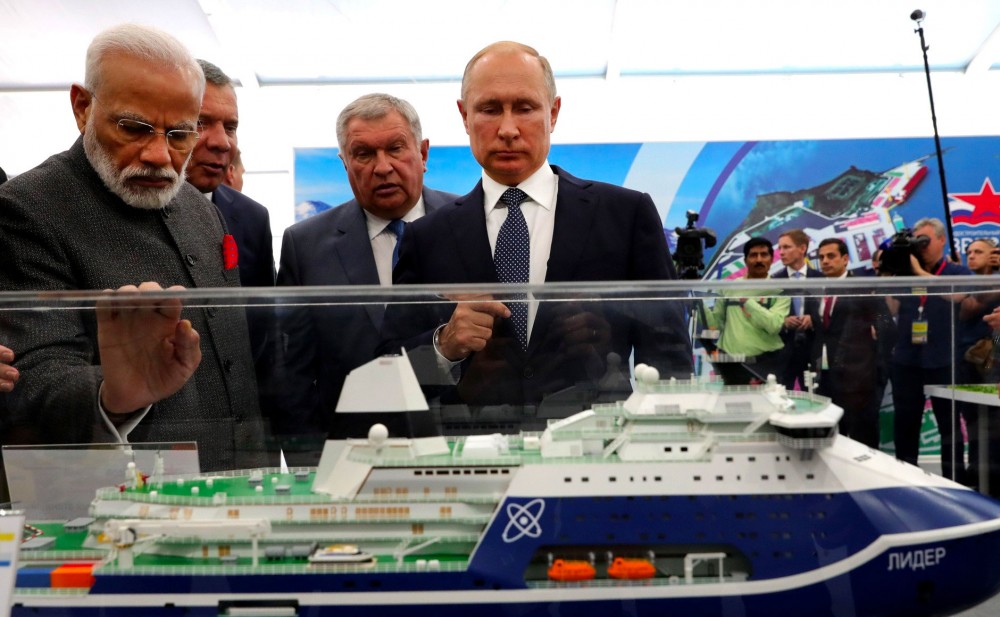 Narenda Modi takes a look at the projected "Lider" icebreaker during a visit to the Zvezda Yard in Vladivostok along with Vladimir Putin and Igor Sechin. Photo: Kremlin.ru

«India is tuned towards interaction with Russia in the Arctic,» says the joint declaration signed by Modi and Russia’s Vladimir Putin during this week’s Russian-Indian Summit in Vladivostok.

«With interest, India is following the development of the Arctic region and is also ready to play an important role in the Arctic Council,» the declaration reads.

The document includes as many as 81 points and touches on a wide range of issues of joint interest. Energy cooperation is among the priorities.

During the visit, Indian companies H-Energy and Petronet LNG both signed memorandums of understanding with Russian natural gas company Novatek.

The agreements envisage joint investments in Novatek’s future LNG projects, as well as LNG supplies and the establishment of joint ventures

«India’s rapid economic growth requires increasing demand for all sources of energy and, primarily, for natural gas as the most environmentally friendly type of fuel,» Novatek leader Leonid Mikhelson says in a comment.

The deals with the Indians pull the Russian energy company even further towards the Asian markets. From before, Novatek has concluded comprehensive and long-term agreements with both Chinese and Japanese companies. A key part of the LNG produced in both the Yamal LNG and Arctic LNG 2 projects will be destined buyers in the Asian-Pacific region.

India and Russia has over many years cooperated closely in the field of energy. The cooperation includes joint developments in the Vankor oil region, an area that ultimately could be connected with the Arctic coast through a projected new pipeline.

According to the Kremlin, the enhanced cooperation between the two countries also includes geological exploration, including on the shelf, as well as Russian energy resource deliveries to India «with possible use of the Northern Sea Route.»

It is the 20th time that the two countries’ leaders meet as part of the bilateral  annual Russian-Indian Summit. As part of the visit, Modi also took part in the Eastern Economic Forum.

He also paid a visit to the Zvezda Shipbuilding Complex, the major shipyard developed by state oil company Rosneft.

The prime minister was guided around in the huge yard by President Putin and Rosneft leader Igor Sechin. The yard is to play a crucial role in Russia’s building of new vessels for Arctic operations, including shipping and oil drilling.

Of the visitors’ special interest was the «Lider» project, the 120 MW icebreaker that ultimately will be able to open large shipping lanes through Arctic ice.

«This is the biggest nuclear icebreaker in the world,» Putin underlined to his Indian visitor. «A decision to build this class of vessels for round-the-year escorts of ships on the northern route has been taken,» he added.

According to Rosneft, the Zvezda Yard will be the single builder of the powerful Arctic vessels.