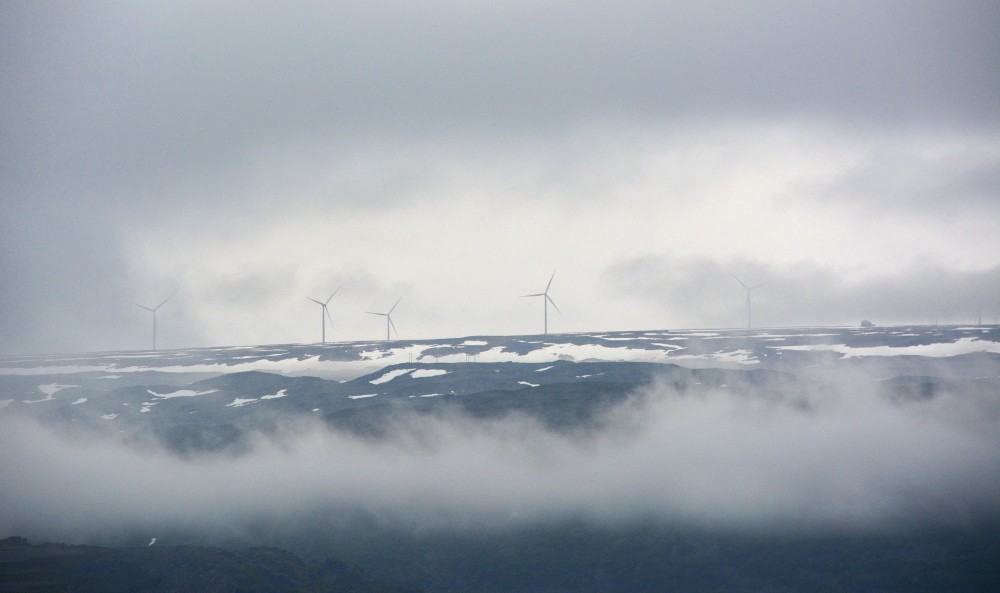 The Raggovidda wind farm is located on the coast of the Barents Sea. Photo: Atle Staalesen

The Raggovidda wind park in Berlevåg, Arctic Norway, teams up with Luxembourgian investors and boosts green generation. Some of it will be used to produce hydrogen.
Read in Russian | Читать по-русски
By

The 15 turbines on Mount Rákkočearru have since they were built in 2014 had an annual production of close to 200 GWh. That is almost twice as much as an average wind park.

The open landscapes of the Varanger Peninsula offer little resistance and winds blow with an average speed of 9,5 meter per second all through the year. Hardly any other wind park in the world has the efficiency of Raggovidda.

Now, a major expansion is in the air. Owner Varanger Kraft sells 49 percent of the park to Cube Infrastructure Managers, a Luxembourian investment company, and announces a doubling of capacity.

By late 2021, the wind park will increase annual generation to more than 400 GWh, the company informs.

It is the shape of the landscapes that is the main reason for the high efficiency of the plant. There is no vegetation. And the area is covered by snow major parts of the year.

«Nowhere else, the conditions are as suitable for development of wind power as along the coast of Finnmark,» Tore Martinsen, wind power developer for Varanger Kraft, told the Barents Observer in 2018.

«We have done some informal investigations and have not been able to find a single land-based facility that produces this well», he underlined.

The project development license obtained by Varanger Kraft in 2010 includes up to 200 MW. But the company has not been able to take advantage of more than 45 MW. The reason is the insufficiently developed transmission grid in the region.

The expansion of the Raggovidda comes as Varanger Kraft is developing a test facility for production of hydrogen.

Down by the sea port of nearby Berlevåg, the company this year started to build a 400 square meter facility that ultimately is to produce a minimum of 120 tons of hydrogen.

It is an experimental project, and production will initially be modest on an industrial scale. But if successful, the hydrogen generation would mean that the increasingly cheap electricity from Raggovidda will not necessarily have to be transferred out of Finnmark, but instead used for alternative purposes.

It will be the cleanest hydrogen in the world, the company told the Barents Observer.

Varanger Kraft is based in the eastern part of the Finnmark region. It does production of hydro- and wind power, and manages more than 3,000 km of grid.