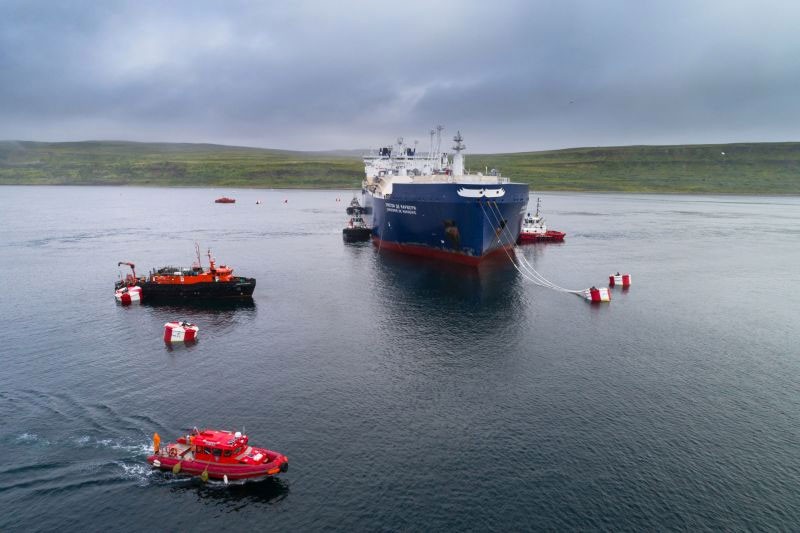 The Daewoo Shipbuilding & Marine Engineering (DSME) has signed a deal worth $748.2 million for the building of two barges for transshipment of Arctic LNG.
Read in Russian | Читать по-русски
By

The deal has been concluded with the Russian State Transport Leasing Company, Kommersant reports.

When ready, the two 380,000 cubic meters big floating storages are to be towed to projected LNG terminal sites in Vidyaevo near Murmansk and Kamchatka.

They will become key parts of the logistics schemes developed by Novatek as part its massive building of LNG projects in the Arctic. Both terminals will serve fleets of ice-class tankers shuttling from natural gas plants in the Yamal and Gydan Peninsulas. Conventional tankers will pick up the LNG and ship it to markets in respectively Europe and Asia.

Both terminals are to be ready for operations by the end of year 2022.

Two years later, in 2024, Novatek and its partners intend to have the Arctic LNG 2 up running, a project that ultimately will produce 19,8 million tons per year. It comes in addition to the more than 16,5 million tons currently produced in the Yamal LNG project.

All of the liquified natural gas is exported.

According to the deal, the two barges will be owned by the State Transport Leasing Company, but operated by Arkticheskaya Perevalka, a company controlled by Novatek.

The State Transport Leasing Company recently got a €522 million credit from the Gazprombank, Kommersant reports.

The deal with the Korean yard also also includes an option to build another two barges.

The transshipment terminals will significantly lower the transportation costs connected with export of the LNG. Currently, the ice-class tankers deliver the LNG directly to the markets. With the new terminals, conventional tankers that are far cheaper to operate will take over key parts of the deliveries.

Novatek has previously engaged in ship-to-ship reloading of LNG in the Sarnes Fjord near Honningsvåg, northern Norway. The company also has plans to establish a temporary ship-to-ship facility near the Kildin Island, to be used until the permanent terminal in Vidyaevo is completed. However, the Kildin facility is not yet in operation, through it reportedly was to start working already in late 2019.