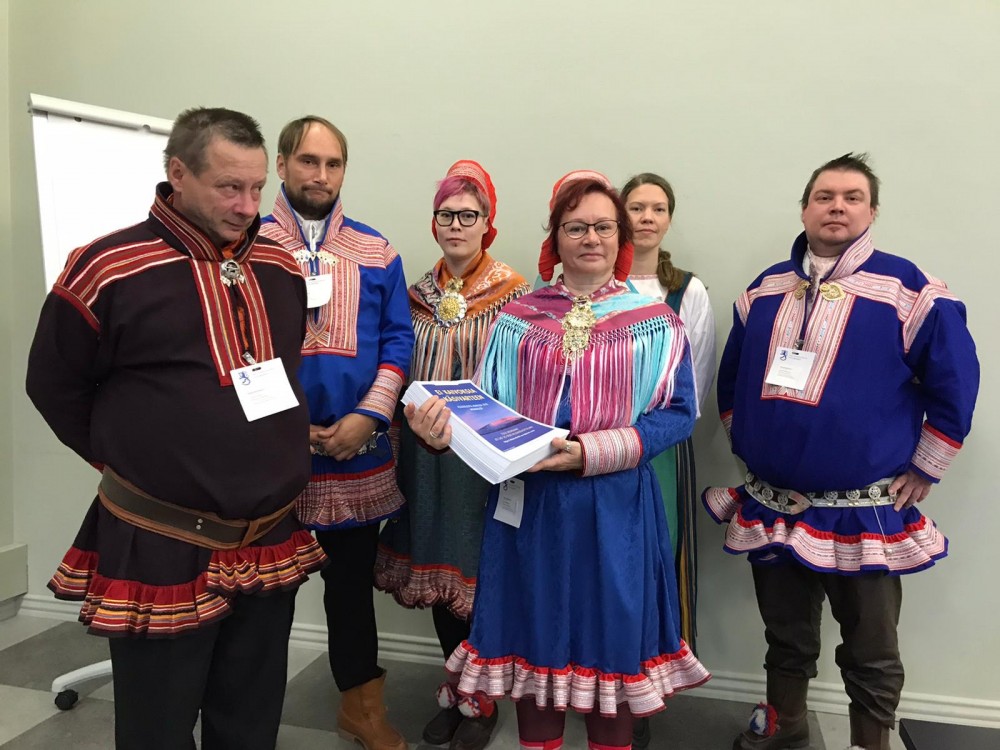 “It’s not possible for reindeer husbandry and mining to co-exist in the same area,” said Minna Näkkäläjärvi in a lengthy interview with The Barents Observer earlier this summer. “The grazing land and migration routes vary from year to year depending on natural conditions,” she explained and told how climate changes make it all even more unpredictable.

Minna and her fellow Sámi campaigners started a petition, hoping to get attention to the case from government officials in Helsinki.

Since June, 37,200 people have signed the online petition, calling on the Finnish government to stop any mining licenses for the area, which geographically looks like an arm of Finland in the northern border regions between Norway and Sweden. This is the homeland to Sámi reindeer herders since ancient times, long before any national borders were established.

The delegation from the north writes in a campaign Facebook update they delivered all signatures on September 2 to Krista Mikkonen, Minister of the Environment and Climate in her office in Helsinki.

Minna Näkkäläjärvi said she thought the signatures and the call to stop licensing for mining were well received by the minister.

Nickel and other metals

It has gone four years since the drilling rig and a tracked vehicle came to collect samples from the rocks on behalf of the Geological Survey of Finland (GTK). More 3,300 meters of core samples from some 20 drilling sites, additional to aeromagnetic surveys in the 245 square kilometers Hietakero area inside the Tarvantovaara and Käsivarsi wilderness areas proved findings of copper, cobalt and nickel, the GTK report from 2018 reads. In February 2020, the Finnish branch of the Dutch-based Akkerman Exploration made a notification reservation. The reservation was approved by the Finnish Safety and Chemicals Agency in April.

Jan H. Akkerman, Managing Director of Akkerman Finland OY, told The Barents Observer more early-stage exploration studies are needed and that no decision is yet taken on whether or not to apply for an exploration permit.

“At this very early stage of investigation it is difficult to define whether reindeer herding and mining can coexist in the Hietakero,” Akkerman said.

He explained that more knowledge is needed on whether there are any mineable mineral deposits and what the eventual type and scale of mining and mineral processing would be. “For now we are interested to understand the views and concerns of the local community, as well as possible interest for cooperation or participation.”

Jan Akkerman welcomes dialogue with local stakeholders and makes clear that a decision whether to apply for an exploration permit or not will be taken after all have had a chance to present their opinion and submitted possible complaints.

Before any mining can start, the Government in Helsinki will need to give approval. While some welcome new mining jobs, others are concerned about current jobs as reindeer herders, but also the future for the only indigenous peoples’ group in the European Union.

“This isn’t only about a job, reindeer is our culture, our lifestyle,” Minna Näkkäläjärvi said.

“If we lose the grazing land to mining, we lose everything.”