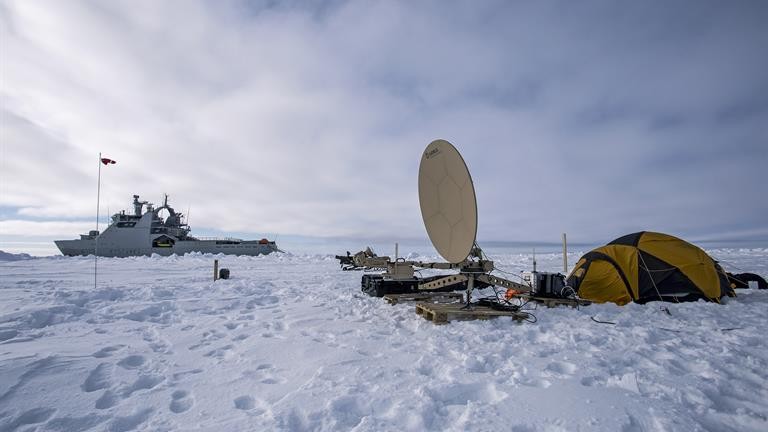 Testing use of satellites to get broadband coverage in the Arctic. Photo: Simen Rudi/Forsvarsmateriell

Old satellites can give broadband to the Arctic

The Norwegian Coast Guard is in need of better systems of communications in the Arctic. Old geostationary satellites could be the solution.
By

Communication infrastructure is very poorly developed on the very high latitudes. Above 80 degrees north, only narrowband communication via HF radio and Iridium satellites are working. This could soon change.

Earlier this month the Norwegian Coast Guard together with the Norwegian Cyber Defence Force and Forsvarsmateriell – the Ministry of Defence’s agency for material management and investments, conducted tests where they managed to establish a stable broadband coverage on 82 degrees north, Teknisk Ukeblad reports.

When satellites are reaching the end of their life they are not maintained as much as during the first ten years, leading them to incline more and more. The Skynet 4B satellite has an orbit inclination of 13.5 degrees.

By using one or two more satellites, it could be possible to get broadband coverage in this area 24 hours a day, Senior Engineer Vidar Madsen of Forsvarsmateriell says to Teknisk Ukeblad.

“This breakthrough can result in a great improvement for the Coast Guard and primarily for “KV Svalbard”, which is operating in the Arctic,” Commanding Officer of the Coast Guard vessel “KV Svalbard” Endre Barane says.  “This may very well benefit in search and rescue missions, and when we’re transferring data to Haukeland hospital by telemedicine or to Norwegian authorities in case of oil spills.”