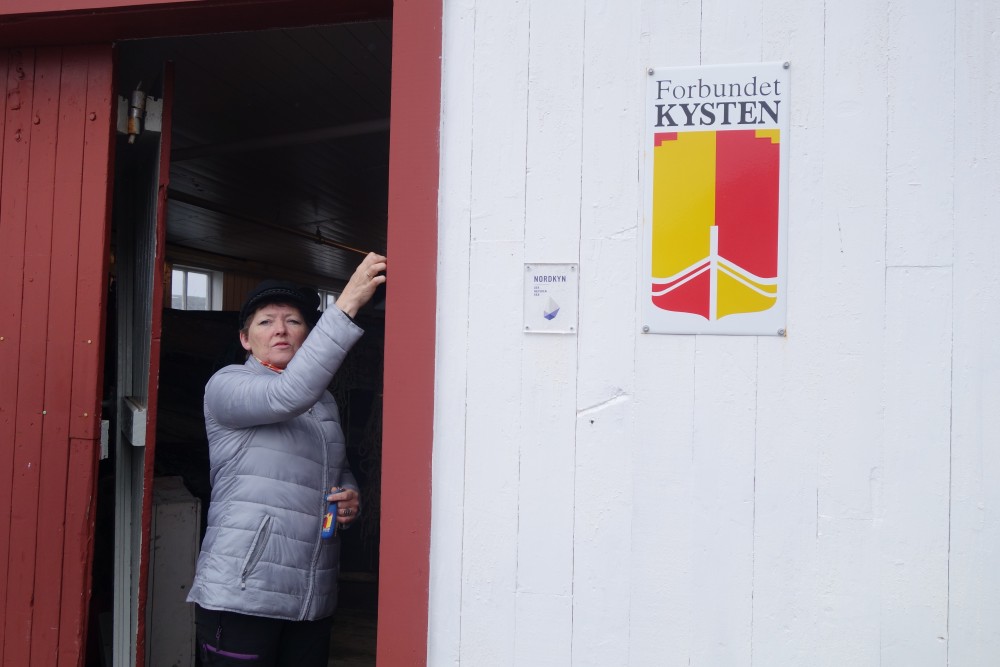 The local museum run by Liv Jorunn Nygård is one of the local sites worth a visit in Kjøllefjord. Photo: Atle Staalesen

The nearby Barents Sea is sprawling with fish. On land, town dwellers have an increasingly diverse mix of tourist attractions, contemporary culture and fish processing on offer.
Read in Russian | Читать по-русски
By

The town located on the Norwegian Barents Sea coast made headlines last week as a new innovative fish processing facility opened. The small plant located downtown invites tourists into the production premises for a glimpse and a grasp of local cod processing.

Several tens of million kroner have been invested in the facility in a joint effort by companies Nergård and Polar Seafood, the municipality and local investors. Norwegian Minister of Fisheries Per Sandberg officially opened the plant in the presence of both local and international guests.

This will enrich local tourism, municipal authorities say. In the facility, tourists can walk through and smell, even touch, crabs, fish and other marine products. A deal has been struck with Hurtigruten, the popular cruise line, which makes daily stop in the local port.

The Foldal plant
The new tourist attraction builds on a rich local fishery tradition. Over the centuries, generations of fishermen have brought their catch to local processing facilities. In the early 20th century, entrepreneur Nils Andreas Foldal established a processing facility which became one of the biggest in the region.

The Foldal plant became widely known for its products, and first of all the stockfish and fish oil.

«Cod was hanging to dry all around town», Liv Jorunn Nygård, head of the local museum, recalls. «The best and biggest fish was shipped to Italy, and up ten hectoliters of cod oil could be produced at the time», she says.

Like the rest of Kjøllefjord, the Foldal fish plant burnt to the ground during the war, but was re-established in the late 1940s. The major 5-floor building, which stands on the site today was erected by Lars Foldal, a nephew of Nils Andreas Foldal, and was used for local fish processing until the early 1980s.

Today, it all houses the local museum managed by the local Foldal Foundation. Liv Jorunn Nygård has spent years developing the museum from scratch.

Nygård proudly shows around in the premises, which today not only houses the museum, but also rooms for guest accommodation, a cafe and a big assembly hall used in connection with the local and well-established Chris Festival.

It is all carefully made in the original designs of the 1950s and has won protected heritage status by Norwegian Directorate for Cultural Heritage.

Cod Culture
Kjøllefjord for years experienced a dramatic decline in jobs and population. While the local municipality in the early 1980s had more than 2,000 inhabitants, the number of locals in 2016 counted only 1,300.

That negative trend, however, is gradually turning. Along with the new fish processing facility, the new town hall now under construction is in itself a clear indication that things are moving in the right direction. Over the last years, the municipality has successfully invested in new industries like wind power, fish farming and tourism. And in culture.

Kjøllefjord is today one of few municipalities in the whole region with its own dedicated cultural leader. Andreas Hoffman, a German, moved to town this spring and is thrilled about the place. «We are building a bridge from the old times to the current by addressing contemporary questions and challenges», Hoffman says.

«It is about coastal culture», he says to the Barents Observer.