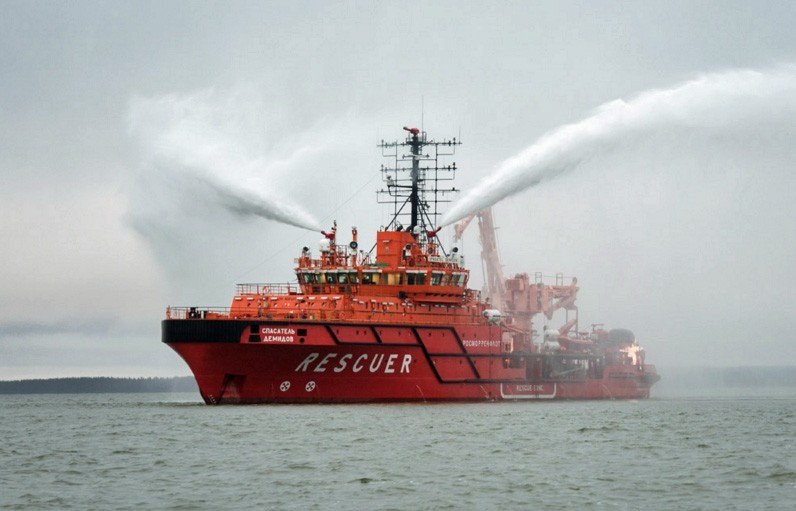 Russia's Nevsky Shipyard has delivered the fourth and final vessel in a series of icebreaking rescuers.
By

Russia has during the last years put much effort into improving search and rescue capacities on the Northern Sea Route, the Arctic shortcut between Europe and Asia.

In addition to opening a series of search and rescue centers along the route, from Murmansk in the West to Provideniya in the East, Russia has started construction of several different types of salvage vessels.

In December Nevsky Shipyard delivered “Spasatel Demidov”, the fourth and final example in a series of multipurpose salvage vessels for the Ministry of Transport, the shipyard’s website reads.

The series are described as the biggest and most significant vessels to be built by Russian shipyards at the expense of the federal program “Development of the Russian Transport System 2010-2015”.

The vessels are 73m long and have deadweight of 1,171 tons. They are intended for rescue and salvage operations, providing technical support and assistance to vessels in distress, and towing ships and offshore structures in ice and in open water. The vessel’s technical capabilities allow to re-float vessels that have run aground or are reef damaged, pump water from flooded compartments, tow emergency vessels to a place of refuge, search, rescue, evacuate and accommodate of people, as well as support underwater diving works to depth up to 300 m, and survey the sea bottom and damaged objects at depths up to 1,000 m.

The vessel has the capacity to extinguish burning fuel on water, extinguish fires on floating and coastal objects, and clear up oil spills and oil products, including those with flashpoint below 60 °C.