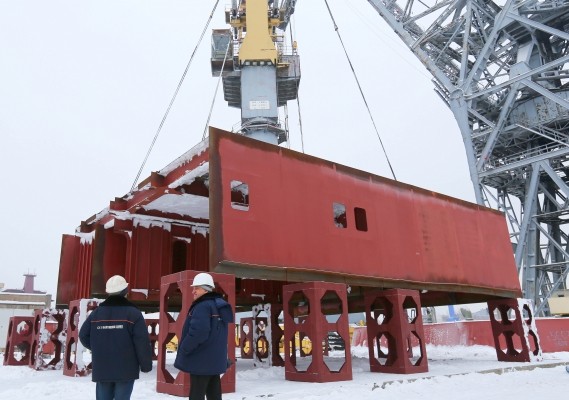 The first parts of the superstructure for "Arktika" being assembled. Photo: Baltic Shipyard

Construction of the world’s largest and most powerful nuclear-powered icebreaker is going at full speed. Baltic Shipyard plans to put the vessel on water in three months.
By

More than 700 people are working in three shifts to finish the hull of “Arktika” – the first of Russia’s new line of nuclear-powered icebreakers for use along the Northern Sea Route. The LK-60 (project 22220) vessels will be 173 meters long, 34 meters wide, and able to break through three meters thick ice.

Baltic Shipyard plans to put the icebreaker on water on May 26, the shipyard’s 150 anniversary. Construction will continue by the shipyard’s quay, some three kilometres from the Winter Palace, Yamal-Region TV reports. The vessel is planned to be ready for the first sea trials in the beginning of 2018.

“Arktika” will be based in Murmansk as part of the state-owned Rosatomflot fleet of nuclear icebreakers. Russia intends to build at least two vessels of the class. Construction of the second vessel, “Sibir”, started in May 2015.

Watch video from the construction site on Yamal-Region TV.