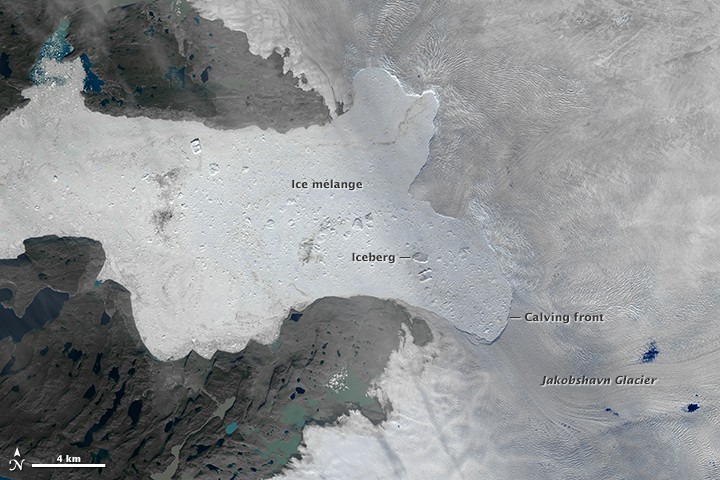 Greenland’s glaciers are shedding ice at faster rates, dumping mass into ocean waters and driving up sea levels.
By

But those glaciers come in so many varied shapes and conditions, and occupy a complex and little understood topography. Under such conditions, is it possible to calculate the volume of ice lost?

Yes, according to a team of experts from the University of Alaska Fairbanks who have devised a mathematical model to do precisely that.

Andy Aschwanden, Martin Truffer and Mark Fahnestock of UAF’s Geophysical Institute combined math and data from field tests to calculate the flow of 29 major inlet glaciers that spill out of Greenland’s ice sheet.

The UAF scientists’ model include the Jakobshavn Glacier, Greenland’s fastest-moving glacier. Jakobshavn has been on the move for a long time — it is believed to be the source of the iceberg that sank the Titanic — but it is now shedding ice at a much faster rate.

The resulting mathematical model is explained in a study published in the journal Nature Communications.

The UAF scientists compared their calculations to the measurements collected by NASA’s Operation IceBridge North campaign, an aerial program that has been monitoring levels of melt on the Greenland ice sheet and around its edges, its associated glaciers and the nearby sea ice. The NASA program is using aircraft to capture detailed images of polar regions and measure annual changes in the thickness of sea ice, glaciers and ice sheets.

The numbers generated by the model were a good match to NASA’s IceBridge measurements of changes in Greeland ice, indicating that the UAF scientists’ model can not only quantify how much ice is being pushed out of the big inlet glaciers but also help predict what will happen to the central ice sheet to which they are connected. Ice flowing from glaciers into the ocean, where it ultimately melts, has the effect of shrinking the entire Greenland ice sheet.

The big glaciers are driving Greenland’s overall melt and are the source of much of the ice shed there in recent years, said Fahnestock, who works in the institute’s glaciers group and has studied Greenland glaciers for several years.

“It’s sort of like pulling out the plug in the bathtub,” Fahnestock said.

Key to understanding the ice outflow is a new understanding of what lies beneath the big glaciers, Fahnestock said. Scientists had long believed the glaciers lie atop valleys cut deep into the earth, but the exact shapes and depths of those valleys were unknown.

NASA’s IceBridge program, which employed an ice-penetrating radar system to examine the ice all the way through, filled in that information gap, he said.

Beneath the glaciers, it turns out, are big ice-filled gulches, some about a mile deep — making them similar in topography to the Grand Canyon, he said.

The work took more than a decade to complete, a UAF statement said.

Upcoming work will examine whether the model can be used to calculate contributions to global sea-level rise.