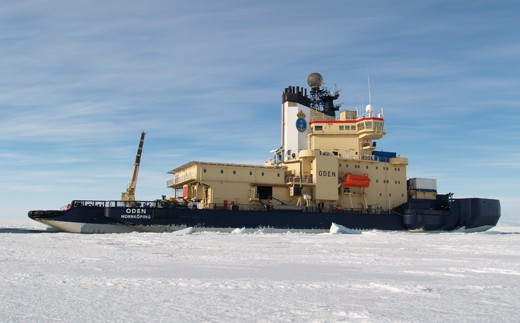 The polar classed Oden is designed as a combined escort icebreaker and research vessel. Photo: Sjofartsverket.se

Sweden’s largest icebreaker will be plowing through the frozen waters of the eastern Arctic Ocean later this summer in part to help a Canadian research team map the limits of their nation’s continental shelf.
By

The ship, named after the Norse god Oden, will transport a team of Swedish researchers to study the ocean’s biological and chemical makeup among other things.

It will also partner with the Louis S. St-Laurent, a Canadian icebreaker that’s mapping the seabed north of Canada’s Ellesmere Island and nearby Greenland. The data it collects will then be used by scientists to eventually determine the limits of Canada’s continental shelf, in other words, where the nation’s territorial waters finally come to an end in the Arctic.

Mary-Lynn Dickson is the head of Canada’s United Nations Convention on the Law of the Sea program and will lead the team on the Louis S. St-Laurent. She says the process will take years and involves studying the geology of the seabed by mapping the floor and sediments beneath it with sound waves.

“It’s a science-driven program,” she tells Radio Sweden. “It will take our scientists a couple of years to analyze the data and then we have to write a submission which will be on the order of one- or two-thousand pages long because it’s not just defining the points of where the continental shelf ends, we also have to prove that that continental shelf is part of the Canadian landmass.”

The two vessels will rendezvous in early August at the Norwegian island of Svalbard. Dickson says its not unusual for nations in the Arctic to team up while mapping what could be part of a country’s territorial claim given the harsh environment of the Arctic.

But global warming is changing the region. Melting ice is opening up waterways once thought to be impassable. Dickson admits that makes conducting research a bit easier but she doesn’t revel in what’s happening to the Arctic.

“I don’t like to think about the changes that might be coming,” she adds. “Certainly, a thinner ice year, if we can get our work done, we would benefit from that.”