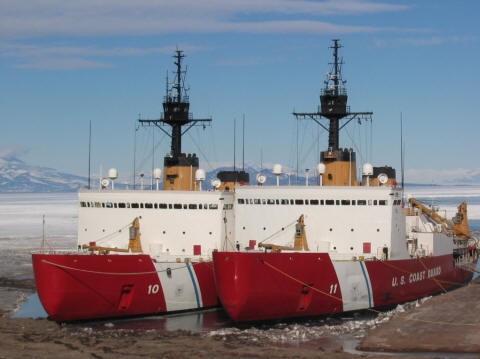 Alaska moved significantly closer to seeing a new Arctic icebreaker Tuesday as a Senate appropriations subcommittee added $1 billion to a bipartisan funding bill for a Navy-built ship.
By

The move marks a major step forward in a yearslong campaign by Alaska lawmakers and others who say the U.S. needs to mind its dwindling Arctic infrastructure, particularly as a melting ice cap makes way for increased commercial shipping traffic and Russian military activity raises national security concerns.

Alaska’s senior senator, Republican Lisa Murkowski, sits on the Defense Appropriations Subcommittee, which passed the measure as part of a $48 billion defense funding bill for fiscal year 2017. The bill still has to make it through the full committee and a likely difficult election-year funding battle. But its approval by the subcommittee paints a rosy future for the icebreaker.

The full committee will consider the bill Thursday, after which it should head to the Senate floor.

At the hearing, Murkowski thanked subcommittee leaders for their work “to ensure that the United States is not left behind in the Arctic.” She made special mention of committee chair Sen. Thad Cochran, R-Mississippi, and spoke as if it was his idea and not something she, Alaska Sen. Dan Sullivan and Alaska Rep. Don Young had talked about frequently for more than a year.

And she also made it clear why she wasn’t taking a victory lap in the committee setting.

“But this is not an Alaska earmark by any stretch of the imagination,” Murkowski said. “And I would probably be struck down if I were to mention an earmark in this committee.”

The statement highlighted how much things have changed in Washington over the last decade as lawmakers have a harder time securing dedicated funding for their states.

Before the hearing, Cochran released a statement about his plan to offer an amendment that included $1 billion for a new icebreaker, calling it “a critical investment in the long-delayed expansion of the U.S. icebreaker fleet.”

“We must take assertive action to provide the vessels needed to protect American national security and economic interests in the Arctic region. The United States needs the capability to have year-round access to polar regions,” Cochran said.

The icebreaker funding won bipartisan approval, with the appeal of shipbuilding for Republicans, adapting to climate change for Democrats, and beefing up national security for both sides of the aisle.

The subcommittee’s ranking member, Sen. Dick Durbin, D-Illinois, said the bill met budget restrictions “without resorting to gimmicks.” And he picked up the cause of an icebreaker, noting President Barack Obama’s call for “the United States to maintain its leadership in the Arctic. The effects of climate change mean this region is increasingly important to national security,” Durbin said, noting the disparity between the U.S. fleet and that of Russia.

“Climate change is real. The national security implications and the ability of our armed forces are real, and so this bill makes a real commitment,” Durbin said.

Appropriations committee member Sen. John Hoeven, R-North Dakota, noted that the defense funding bill “incorporated submissions from 90 senators on both sides of the aisle on nearly every facet of the department’s operations, and now I believe we have good, bipartisan legislation for the American people.”

After the hearing, Murkowski called the icebreaker funding “a significant victory in (her) decadelong fight to turn our nation’s focus to the Arctic and embrace our role as an Arctic nation.”

“I have long fought to fully fund the acquisition of Arctic-capable icebreakers instead of the piecemeal approach that the administration has been taking for the last eight years,” Murkowski said. In the statement, she thanked the members of the committee “for recognizing the importance of this vessel to our national security.”

The U.S. has only two heavy-duty icebreakers, one largely scrapped and unusable, the other dedicated to scientific missions in Antarctica. A third icebreaker, the medium-duty Healy, travels in the Arctic mainly as a research ship.

The heavy-duty Polar Star has five to eight “years more useful life in her,” but “throughout that time, we will not see her in the Arctic,” Murkowski said, noting the ship’s assignment to Antarctica.

Arctic icebreaker advocates have warned of increased activity in the area by the Russian military and growing opportunities for shipping as ice melts and new sea passages open. They’ve warned the U.S. Coast Guard would be unprepared to come to the aid of commercial vessels that run into trouble in Arctic waters.

The “reality is, we are sitting dead in the water when it comes to our ability as a nation to be leading in the Arctic, because we simply do not have the infrastructure,” Murkowski said. “So the commitment today to making this a reality is very, very significant,” she said.

Lawmakers have long haggled over how to fund an icebreaker when one vessel costs more than the Coast Guard’s entire annual construction budget.

In a somewhat surprise move, the appropriations provision released Tuesday simply funds the icebreaker through the U.S. Navy’s shipbuilding budget. The Navy would contract out the project to a U.S.-based company.

Murkowski’s spokesperson Karina Petersen said the Navy “will be able to better manage a contract of this size” and that Murkowski expects an “upfront” appropriation “will potentially expedite the process.”