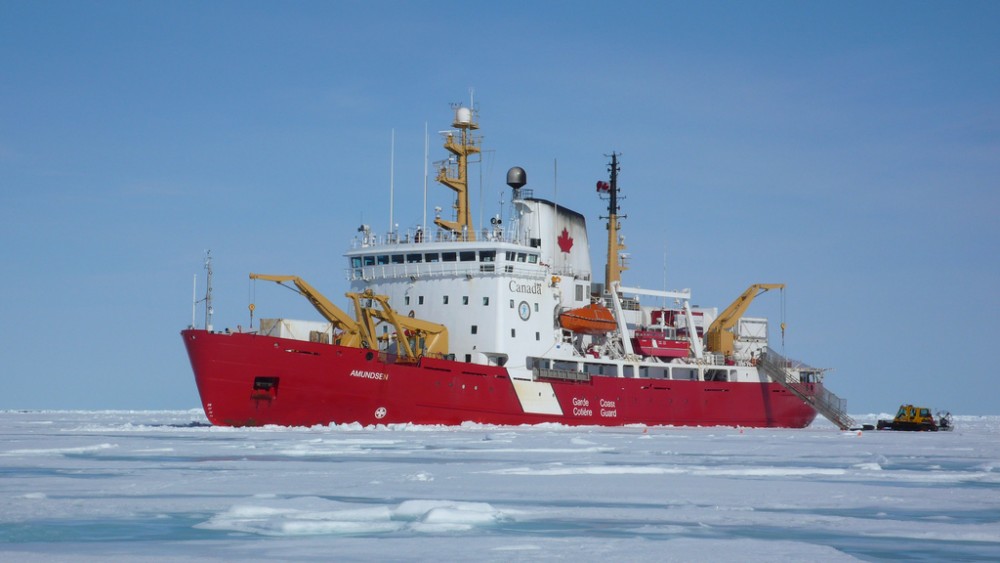 Ottawa’s efforts to map the Central Arctic Ocean in an attempt to present a scientific case for Canada’s claim to the North Pole are a monumental waste of taxpayers’ money, says one of the country’s leading experts on international law and the Arctic.
Read in Russian | Читать по-русски
By

Michael Byers, Canada Research Chair in Global Politics and International Law at the University of British Columbia and the author of International Law and the Arctic, says under existing international law Canada has no legal footing for the North Pole claim even if it manages to prove that its continental shelf stretches all the way to the pole and beyond.

Under the provisions of the United Nations Convention on the Law of the Sea (UNCLOS), which Canada ratified in 2003, coastal states can claim up to 350 nautical miles of seabed if they can prove that the continental shelf is a natural prolongation of their landmass. Furthermore, if a coastal state can prove that a submarine elevation, an underwater mountain range that is connected to its continental landmass and is geologically identical to it, extends beyond 350 nautical miles from its coastal baselines, it could claim the seabed past the 350 nautical miles.

Last week, in interviews with Radio Canada International, Canadian officials revealed that Canada plans to submit its Arctic continental shelf claim in 2018. The submission to the United Nations Commission on the Limits of the Continental shelf it is expected to include the North Pole, overlapping with both Russian and Danish submissions that also claim ownership of the planet’s northernmost point, officials said.

Canadian scientists claim they have accumulated enough scientific evidence to prove that Lomonosov and Alpha-Mendeleyev Ridges, stretching under the Arctic Ocean from Canada and Greenland to Russia, are submarine elevations, thus giving Ottawa the right to claim the ocean floor beyond the 350 nautical miles limit all the way to the North Pole.

“What Canadian officials are telling you in May 2016 is that they are implementing a policy direction given by (former Prime Minister) Stephen Harper in December of 2013,” Byers said.

It was Harper who overrode the advice of Canadian government scientists and international lawyers in deciding to do more mapping in the Central Arctic Ocean so as to include the North Pole in Canada’s submission, Byers said.

Lomonosov Ridge, which stretches underneath the Arctic Ocean from Siberia to the shores of Canada and Greenland, may also be an extension of Greenland and therefore partially Danish, and an extension of the Asian continent, which makes it at least partly Russian, Byers said.

Canada and Denmark, which owns Greenland, have already delineated their maritime boundary in most of the Arctic.

“The default rule in international law for such maritime boundaries is the principle of equidistance, a line that is equal distance from coastline on either side at every point of the line going outwards from the coastline,” Byers said. “And if you draw such a line into the Central Arctic Ocean, the North Pole falls squarely on the Danish side.”

In addition, in November 2012, the Harper government announced that it had come to a negotiated agreement with Denmark concerning the location of that boundary line out to 200 nautical miles from shore, to the end of the so-called Exclusive Economic Zone (EEZ), and the two countries agreed to use the equidistance principle, Byers said.

“The scientists can say, ‘yes, there is a scientific argument, the Canadian continental shelf includes the North Pole, but only if you look at the science,” Byers said. “The moment you look at the law it clearly becomes either Danish or Russian.”

The reason Harper insisted on more mapping had nothing to do with insufficient science, Byers said.

“He didn’t want to be the prime minister who surrendered Canada’s claim to the North Pole,” Byers aid. “It would have been politically disadvantageous to have the opposition parties criticizing him for giving up the North Pole. So he punted this issue down the field, he asked for more mapping.”

The sad thing is that the new Liberal government of Prime Minister Justin Trudeau knows all these details, but has chosen to continue in Harper’s steps, Byers said.

“Instead of being brave and basing its decisions on evidence, on what the experts are telling it, especially the international lawyers in the department of Global Affairs, it’s choosing to hide behind Mr Harper’s old policy,” Byers said. “And this is unfortunate because the costs of mapping this area are extremely high.”

Russia, for example, has limited itself to only mapping only its side of the Lomonosov Ridge and did not claim the entire elevation.

“It stopped just slightly past the North Pole, towards the Canadian and Danish side because it knew that it didn’t need to map beyond that point because the eventual result, the maritime boundary will be negotiated to lie somewhere in the middle of the ocean,” Byers said. “Not way over on the Canadian or Danish side but somewhere in the middle. And so Russia mapped only as far as it needed to.”

Canada and Denmark are not taking this pragmatic approach, he said.

This last and unnecessary round of ocean mapping research is expected to cost about $100 million dollars, he said.

This summer Canada’s largest icebreaker Louis S. St-Laurent will be joined by the Swedish icebreaker Oden to conduct the last survey in the Arctic Ocean, a joint scientific program with Sweden.

That means it will not be doing its regular tasks in the Canadian Arctic archipelago, in the Northwest Passage, Byers said.

“We have a shortage of icebreakers, to send one to the North Pole on this folly is highly inefficient and possibly damaging to other interests,” he said.

It could take 10-15 years before the UN Commission on the Limits of the Continental Shelf goes through the entire data submitted by Canada, followed by long negotiations between Russia, Canada and Denmark over their maritime boundary in the Arctic Ocean.

“The end result is that, perhaps, our children or grandchildren will be able to celebrate legal certainty in the Central Arctic Ocean,” Byers said. “Because it will take past our own retirements before we get to a clear result.”

The irony of this situation is that apart from a symbolic claim to the planet’s northernmost point, ownership of the North Pole continental shelf offers very few practical advantages.

“The North Pole is not what most people imagine. It is not a place with a candy-striped pole signifying the location of Santa’s workshop,” Byers said. “It is, in fact, located in the middle of a large and hostile ocean; there are 4,000 metres of water at the North Pole; it is covered most of the year with shifting, moving sea ice; temperatures often drop to minus 50 degrees; it’s one of the most inhospitable places on the planet and therefore has no economic value.”

These submissions only address the issue of who has the right to the seabed and potential resources there, he said.

“I cannot imagine anyone wanting to drill for oil in 4,000 metres of water, that far from any shoreline, from any port, from any population,” Byers said. “This is all about domestic politics. It’s about politicians playing on people’s childhood memories of Santa Claus and his home at the North Pole. The harsh reality is the North Pole is a very dangerous, remote place and we’re wasting as a country hundreds of millions of dollars in trying to keep our politicians protected from criticism.”

Note: Government officials were not available for comment when this interview was conducted on Friday afternoon, however, we will try to get them a chance to respond on Monday.