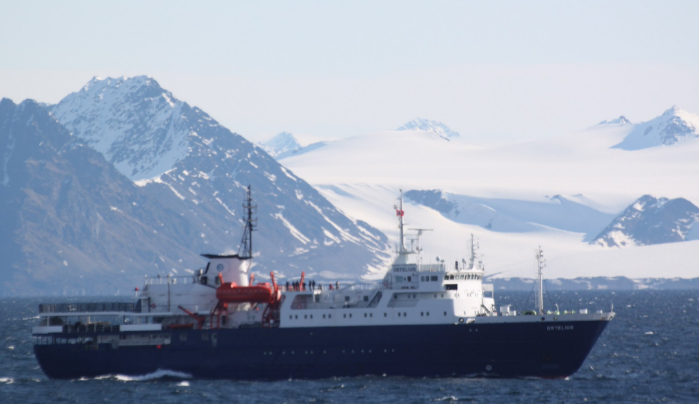 This photo shows "Ortelius" under tow on Sunday. Weather is good, with some wind. Photo: Norwegian Coast Guard

The expedition ship “Ortelius” with 146 persons onboard is under tow towards Longyearbyen.
By

“There is no danger to the passengers, ship, crew and the environment,” writes the Joint Rescue Coordination Centre for Northern Norway in a press-release.

“Ortelius” was sailing the remote Hinlopen Strait between Nordaustlandet and Spitsbergen on the Svalbard archipelago when the captain on Friday reported an engine problem.

As a precaution, the vessel “Polarsyssel” belonging to the Governor of Svalbard sailed to the area and started to tow the cruise vessel when it became clear that the damage to the propulsion system could not be fixed properly before the vessel is in port.

A Norwegian Coast Guard vessel is also following the tow.

Operated by Oceanwide Expeditions, “Ortelius” is scheduled to sail several cruises in the waters around Svalbard until mid-July.

“Ortelius shall commence its voyages as scheduled on 08 June,” the company writes in a short press note about the incident.

The ship was originally built in 1989 and served as a special purpose vessel for the Russian Academy of Science. “Ortelius” has ice-class notation 1A making voyages in the icy waters north and east of Spitsbergen possible.