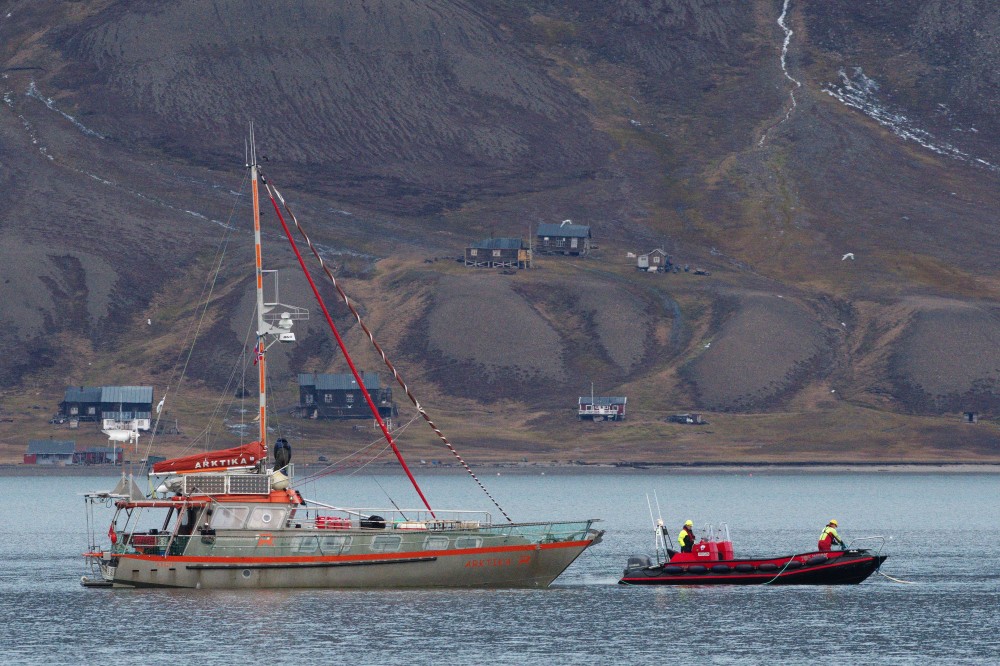 The "Arktika" on its way to Longyearbyen, accompanied by sailors from local Norwegian authorities. Photo: Bjørn Franzen

Together with his wife Alexia, Gilles Elkaim planned to take his 47 feet big «Arktika» north of the Franz Josef Land, Severnaya Zemlya and then towards the New Siberian Islands. Subsequently, the explorers intended to drift with the ice and make it to the very North Pole point with dogs.

It would become an epic adventure in the footsteps of Fridtjof Nansen and his Fram expedition of 1893–1896. In complete autonomy, the «Arktika» and its crew would spend two years in Arctic waters.

Never before have a small sailboat reached such latitudes in autonomy.

The expedition got an abrupt turn however when complicated ice conditions in the area put a stop to further eastwards sailing.

«It is too late to reach the New-Siberian Islands, the sea would not allow it and the polar night is about to arrive in less than three weeks», the crew wrote on its Facebook page on 29th September.

Elkaim subsequently took his ship to Nordaustlandet, the northern shores of archipelago Svalbard.

That, however, was not appreciated by local Norwegian authorities. On October 13th, a helicopter from Svalbard administration landed near Arktika ship and officers confiscated ship documents and crew passports.

They blamed us for being in a protected area without preliminary permission, the project website informs. On 19th October, the «Polarsyssel», an inspection vessel operated by local Norwegian authorities, tugged the «Arktika» to Longyearbyen, the administrative center of the archipelago.

«We are in close contact with the Ambassador of France in Norway. The few dialogues, regarding the decisions taken by the Governor of Svalbard, has us a little concerned», the expedition members say on Facebook.

According to Terje Carlsen, Communication Advice at the Governor of Svalbard, the «Arktika» was towed to Longyearbyen partly because of technical problems with the ship engine and partly because of special nature protection regulations in the area. The Duve Fjord, the site where the ship was located, is subjected to strict regulations, he says to the Barents Observer.

Police in Longyearbyen says to the Barents Observer that it has «assisted to vessel» and that it now will investigate the circumstances of its whereabouts.

The «Arktika» has round hull (no keel) made of thick aluminium, which allows her to escape the ice pressure. It is built by the French shipyard META, and registered in Finland. A complete refit of the boat was made in 2011 and 2012, the project website informs.