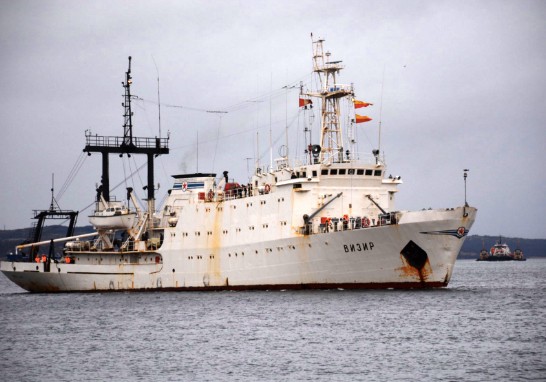 Hydrographers from the Northern Fleet are putting new sites and structures on the map.
Read in Russian | Читать по-русски
By

Among the new discoveries are two islands off the coast of Novaya Zemlya, the Russian Navy informs.

The Northern Fleet research vessel «Vizir» just made it back to Murmansk after a 11,000 mile voyage through Arctic waters. The ship has conducted studies along several of the Russian archipelagos.

The biggest of the islands discovered along Novaya Zemlya is about 400 meter long. It is located near the Roza glacier, and has come to the fore as the glacier ice has retreated.

The researchers have also found «a number of other new geographic objects», like islands and peninsulas, in the areas of the glaciers Nansen, Moshchny, Vershinsky, Rozhdestvensky and Sredny, the Navy press service informs.

In the course of the expedition, the experts also conducted studies of the sea bottom, geodetic surveying and testing of navigation systems for the Northern Sea Route. East of the Vize Island, they made detailed surveying of a 1,500 area which today is a «white spot» on maps, a press release reads.