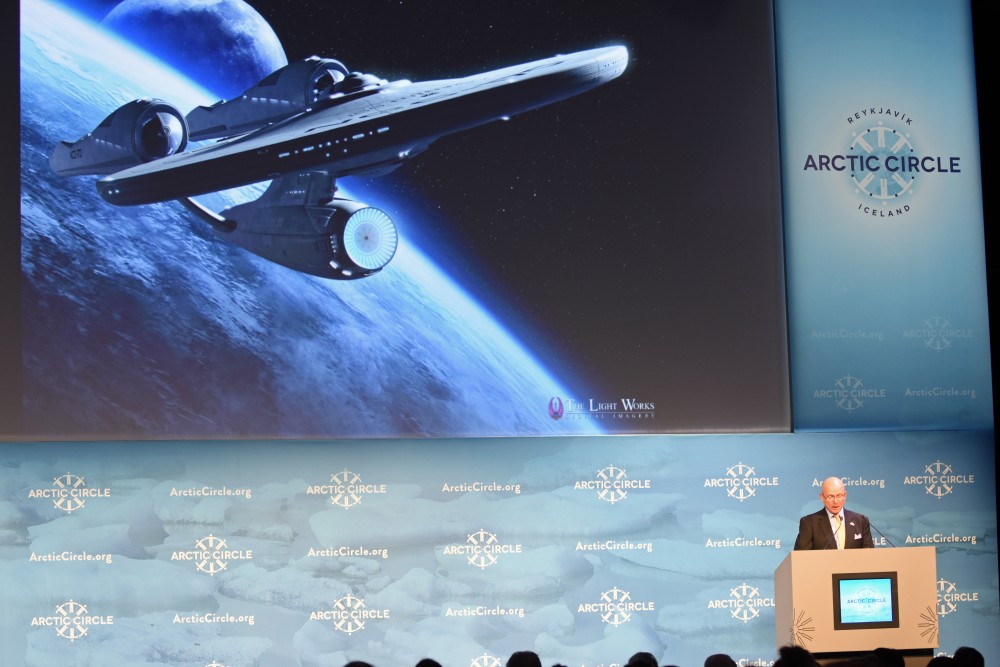 Admiral Papp, the U.S. State Department’s Special Representative for the Arctic speaking at the Assembly in Reykjavik. Photo: Thomas Nilsen

Like mankind cooperated on spaceships in the Star Trek movies, joint icebreaker operations in the Arctic would benefit all of us today, says Admiral Papp.
Read in Russian | Читать по-русски
By

Arctic Circle Assembly kicks off in Reykjavik on Friday with 2,000 participants; the gathering is by far the largest international platform with focus to the north.

The assembly features speeches from a high profil list of officials, including the Foreign Minister’s of Iceland and Finland, Timo Soini and Lilja Aldredsdóttir.

Climate change, Arctic research and joint efforts to share infrastructure operations in the Arctic are up for discussions. Admiral Papp, the U.S. State Department’s Special Representative for the Arctic pointed to the Star Trek movies when calling for the need for all Arctic nations to work together to overcome the challenges in the high north.

“What if we could utilize a joint fleet of icebreakers for common operations in the Arctic,” Admiral Papp suggested while pointing to a huge Star Trek spaceship on the screen.

In the United States, the icebreaker issue is debated among lawmakers and stakeholders. The U.S. Coast Guard’s icebreaker starts to get old and replacement would be needed in not to far future.

A law dating back to the 1920s, however, requires that any ships sailing with cargo or people between two U.S. ports must be built in the United States. That would be far more expensive compared with buying a state-of-the-art icebreaker from for instance a Finnish shipyard.

Today, Russia has the world’s largest and most powerful fleet of icebreakers including both nuclear powered and diesel-electric ones.

Head of Norway’s Polar Institute, Jan-Gunnar Winther, is also present in Reykjavik and says to the Barents Observer that Admiral Papp’s suggestion should be followed up.

“Logistic operations in the Arctic are very expensive so we more than welcome initiatives to share icebreakers and other infrastructure,” says Jan-Gunnar Winther.

He tells that science communities are indeed cooperating good while working both in the Arctic and Antarctic, but there are still many infrastructure operations that could be more effective if different countries worked more coordinated.

More than 400 speakers will address different aspects of Arctic cooperation in the plenary and outbreak sessions to take place in Reykjavik over the weekend.

On Saturday, Secretary-General of the United Nations Ban Ki-Moon will meet the participants, and discuss follow-up efforts to implement the Paris Climate Agreement.

This icebreaker runs on LNG