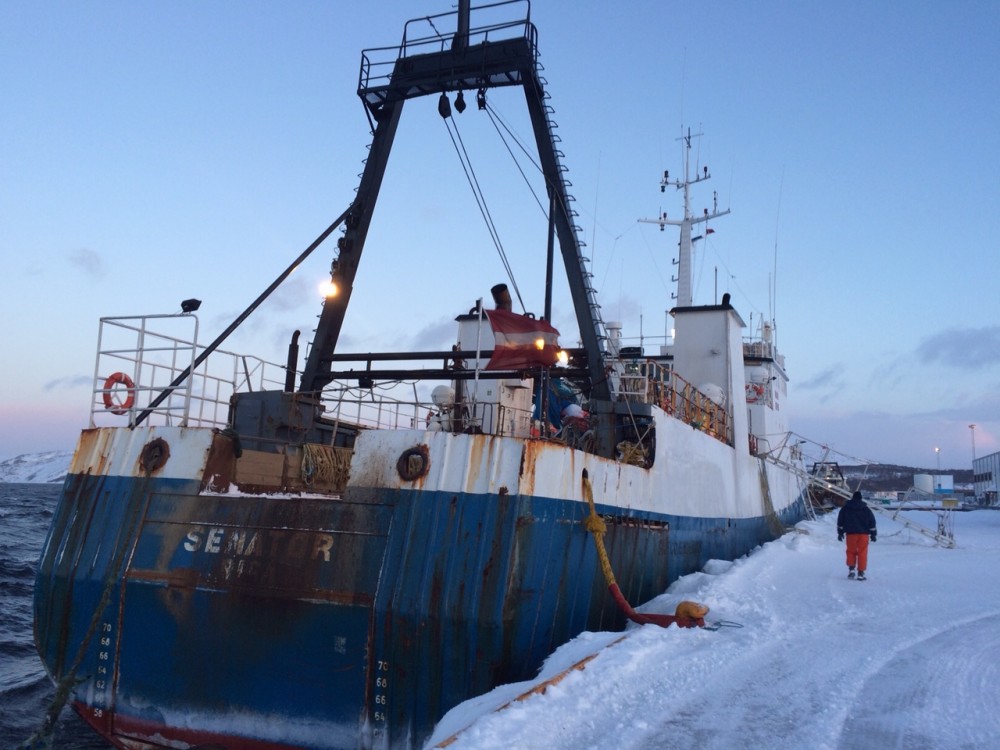 Norway argues that it had the full right to arrest Latvian snow crab fishing vessel «Senator» in Svalbard waters. Most countries disagree.
Read in Russian | Читать по-русски
By

The vessel was arrested on 16th January as it was operating in the waters around Svalbard, the Norwegian Arctic archipelago. It is suspected of having engaged in illegal catch of snow crab on the Norwegian shelf in the Svalbard fishery protection zone, the Norwegian Navy informs on its Facebook page.

«The Senator was inspected by [coast guard vessel] KV Svalbard and the inspectors then revealed that the ship had started fishing in the area without permission from Norwegian authorities», the Coast Guard says.

The crabber was subsequently forced to set course to the port of Kirkenes, where it today is awaiting police prosecution. The «Senator» had put out 2,600 snow crab traps in the area, NRK reports.

However, the arrest of the «Senator» is more about politics than about crabs.

According to Per-Arne Totland, a writer and expert on the Svalbard archipelago, the snow crab has the potential to become a new conflict issue in the area.

«The snow crab is defined as a sedentary species, which lives on the sea bottom and consequently is included in regulations applying to the continental shelf», Totland says. «In other words, the same laws which apply to oil and gas.»

«This means that a conflict over the snow crab could be seen as a test whether Norway can be subject to pressure with regard to the shelf around Svalbard».

Norway argues that the Svalbard Treaty of 1920 gives it full sovereignty over the continental shelf around the archipelago. That view, however, is disputed by the international community, which maintains that all signatory counties of the Svalbard Treaty have equal rights to engage in economic activity in the waters and on the shelf.

The EU, UK, USA and Russia all challenge the Norwegian stance on the issue.

According to NRK, the EU has officially approved a list of 16 EU vessels which can engage in snow crab fishing around Svalbard. That has enraged Norway’s Minister of Fisheries Per Sandberg.

«This is not the way to negotiate», Sandberg says to NRK. «The EU can catch snow crab, but then we want something in return», he underlines. Meetings with the EU Commission is reportedly due this week.

The snow crab, an invasive species, has over the last year expanded explosively in the Barents Sea. The crab, which first was discovered in the area in 1996, is now located over major parts of northern and eastern Barents Sea. In 2015, about 8,600 tons of snow crab was landed in Norway, the Marine Research Institute says.

Not only Norwegian and Russian fishermen want a piece of the cake. Also third countries vessels are in the area. Since 2013, several EU vessels have engaged in the snow crab fishing. Most of them are from Lithuania and Latvia.

According to Per Arne Totland, Norway has good arguments with regard to its stance on the Svalbard shelf.

«But it is a vulnerable position for Norway to stand alone against the rest of the world», he underlines

«If the issue was taken to the UN court in the Hague, it would be hard to predict which side will win».