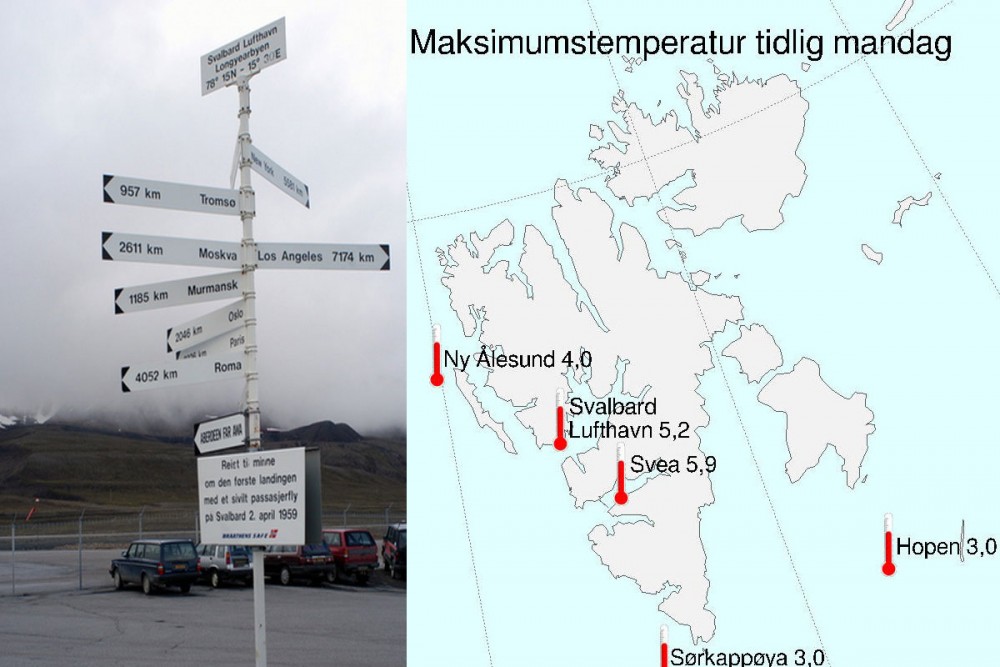 Temperatures in Longyearbyen Monday morning (map from yr.no) reminds of places far away from the Arctic. Photo: Thomas Nilsen

Arctic heatwave: People in Longyearbyen woke up Monday morning to 20 °C warmer than average for February.
Read in Russian | Читать по-русски
By

It is a very, very different Svalbard than people are used to. Longyearbyen airport measured 5.2 °C Monday morning. Average February temperature since the station was established in 1964 is -16 °C, according to the Norwegian Meteorological Institute.

Longyearbyen’s 5.2°C is similar to the forecast for tomorrow morning in Paris, a city that according to the distance sign outside the terminal building at Longyearbyen airport is 3.326 km to the south.

It is a high pressure system over Finland that sends warm air up to Svalbard, the Meteorological Institute explains.

Monday’s heatwave is not unique for the Arctic this winter. Last week, the Barents Observer reported about extreme temperatures in the Russia Arctic. The average 2016 temperature in Siberia, Yamal and Taymyr Peninsula was 7.7 degrees above the norm. Among the most extreme examples is the Island of Vize, north of Novaya Zemlya, where average temperatures in January was 17 °C above normal for the month.

Monday’s 5.2 °C in Longyearbyen is even warmer August summer temperature that in average since 1964 is 4.7 °C.