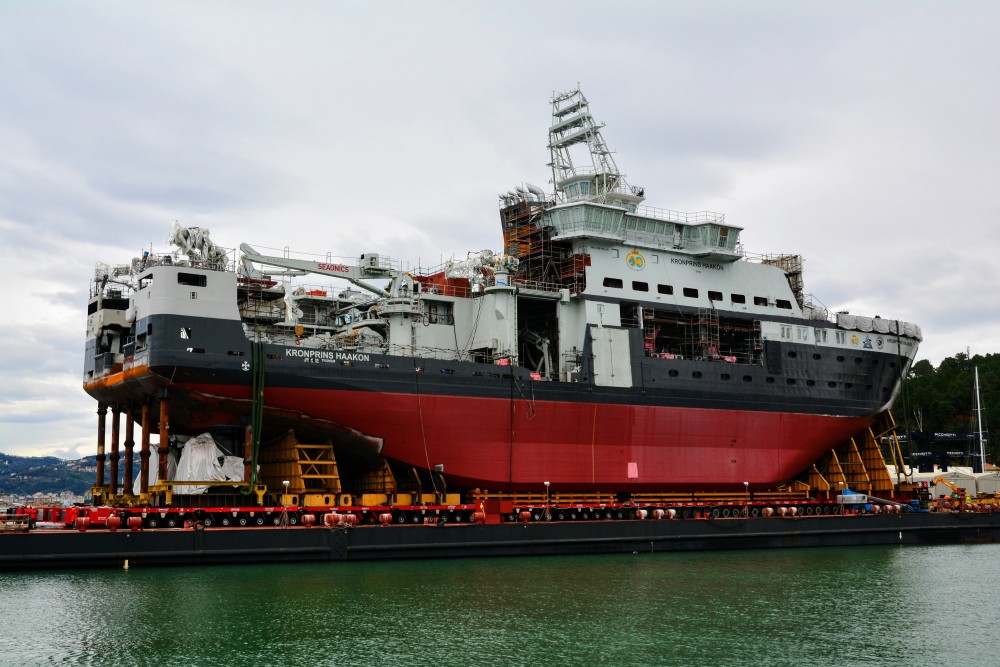 R/V «Kronprins Haakon» rolled out of the construction hall and launched. Northbound voyage set for October.
Read in Russian | Читать по-русски
By

A milestone was set this week for what will be the most advanced high-tech research vessel ever breaking the ice on the top of the globe. «Kronprins Haakon» was launched in to a floating dock at the yard in Genova, Italy.

The remaining work that couldn’t be done inside the ship-hall due to ceiling height will be done in the dock before the vessel will set course for Norway on her maiden voyage this fall.

«Kronprins Haakon» holds PC 3 icebreaking class for year-around operations in ice-covered waters. For Norway, that today don’t have any ocean-going icebreakers, the vessel means a breakthrough for Arctic research.

«With Kronprins Haakon, Norway gets the world’s most advanced ship for exploration of polar regions, we are proud,» says Director of the Polar Institute Jan-Gunnar Winther.

He says the christening of the vessel will take place in Tromsø a year from now. After breaking a bottle of champagne against the bow, «Kronprins Haakon» will set sail for real expeditions starting in 2018.

«Most likely it will be an expedition to the Antarctica when it is summer there in 2018/19,» tells Jan-Gunnar Winther.

With a price-tag of 1,4 billion Norwegian kroner (€156 million), the vessel is financed by the government. The Polar Institute is the owner, while the Norwegian Institute of Marine Research will be the operator. UiT The Arctic University of Norway is also partner to the vessel and will likely be the main customer for on-board research.

Homeport will be Tromsø.

The icebreaker will be equipped with state-of-the-art scientific instrumentation including moon pool and ROV, AUV. Scientists onboard will get a unique opportunity to investigate what happens underneath the ice. On deck, there is space for up to two helicopters. Climate changes and other environmental studies of the Arctic and Antarctica will be main focus for the researchers on-board.

«Kronprins Haakon» (named after Norway’s current Crown Prince Haakon) can break through 1,5 meters thick ice can remain out at sea up to six weeks at a time.