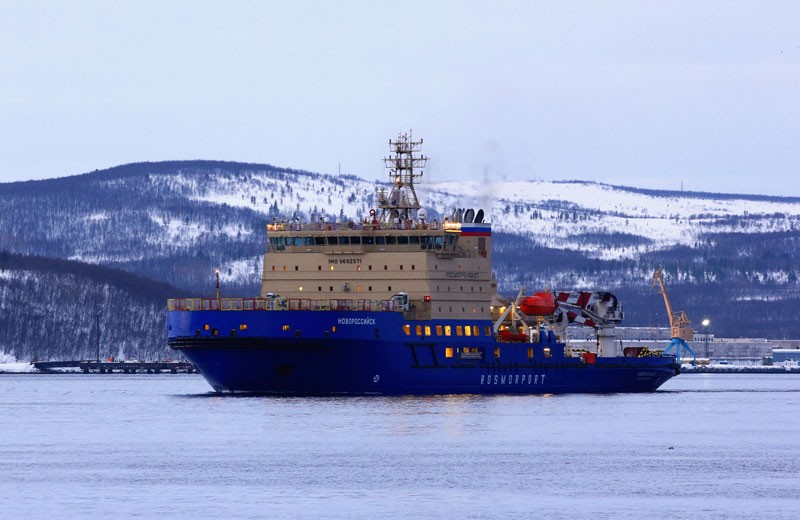 Russia’s newest icebreaker starts her Arctic career with escorting 200 construction workers to the military base on Alexandra Land.
Read in Russian | Читать по-русски
By

«Novorossiisk», the icebreaker which was handed over to state company Rosmorport on 26th December 2016, in early February reached the archipelago of Franz Josef Land on her Arctic maiden trip.

In its wake was passenger ship «Klavdia Yelanskaya», and 200 workers for the new military base on site.

The voyage from Murmansk to the archipelago took four days, Rosmorport informs. In addition to escorting the «Klavdia Yelanskaya», the icebreaker was loaded with 160 tons of goods which was lifted onto the ice by the ship’s own crane.

Captain Yaroslav Verzhbitsky had hoped for more ice. «The ice which we encountered did not give us the opportunity to fully test the opportunities of the icebreaker», he says to Murman TV. There was no more than 30 cm thick ice in the area and the ship is built for operations in thickness of up to 1,5 meters.

The latest satellite pictures presented by the Russian Arctic and Antarctic Research Institute show that ice layers are getting thick on the northern and eastern side of the archipelago, while access is still open from the west.

The «Klavdia Yelanskaya», a 40 year old ship operated by the Murmansk Shipping Company, set its passengers on the ice. They will all be employed in the erection of the new major army base on site, as well as the airfield Nagurskoye. The ship, built in Kraljevica, then Yugoslavia, is normally shipping goods and passengers along the coast of the Kola Peninsula.

The two ships set course back to Murmansk on the 6th February, Rosmorport informs.

The «Novorossiisk» will be a frequent guest in Franz Josef Land this winter. On the 11th February the ship again left Murmansk with course towards the north. This time with construction materials

Then afterwards, it will escort the tanker «Varzuga» from Arkhangelsk to the island.

The «Novorossiisk» is the third vessel of the kind (project 21900). From before, the «Murmansk» and the «Vladivostok» are in duty for Rosmorport.