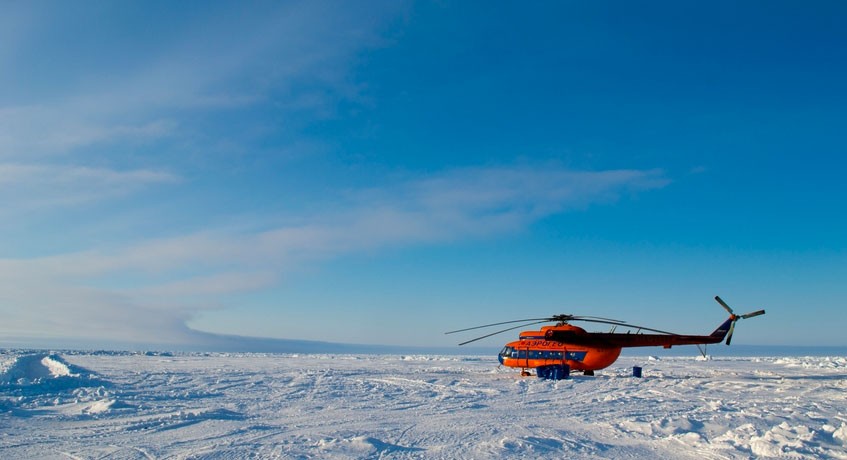 Helicopters from Aerogeo will find a place for this year's Barneo camp. Photo: ag24.ru

Two helicopters are on their way to find a suitable ice floe for the Barneo-2017. Like previous years, the Norwegian airport of Longyearbyen will serve as logistical hub for the camp.
Read in Russian | Читать по-русски
By

The copters type Mi-8T on Sunday morning took off from Krasnoyarsk with course for the north. They will have pitstops in Igarka, Khatanga and on the island of Sredny, Severnaya Zemlya, before they make it all the way to the North Pole, aviation company Aerogeo informs.

The eleven people on board are not only pilots and aircraft technicians, but also experienced polar experts. They will first identify an ice floe suitable for the Barneo-2017, and then help facilitate the delivery on site of people and goods.

«These people are fully-fledged members of the expedition and can execute any operation needed for the life-sustainability of the station», Aerogeo informs.

It has been speculated about a possible visit to site of President Vladimir Putin. According to SeverPost, the President might go to Barneo ahead of his attendance at the Arctic Forum in Arkhangelsk late this week.

At the same time, developers of Barneo-2017 confirm that tons of equipment are on its way.

On March 15, a truck with landing equipment set off from Moscow and on Sunday arrived in Murmansk. Two days later, another truck and a trailer with loaded platforms and tractors started out from Moscow to Tver (Migalovo airport) and on March 18, the paratroopers with platforms and tractors were flown in to Murmansk by Il-76, the Facebook page of the Barneo-2017 informs.

Like previous years, the Barneo-2017 will use the airport in Longyearbyen, Svalbard, as logistical hub for the operations. An agreement between Svalbard Governor Kjerstin Askholt and Aleksandr Orlov, Vice President of Russian Association of Polar Explorers, was reached on 13th March.

In a comment posted on Facebook, chief operations officer Irina Orlova says the original plan was to move all logistical operations to Franz Josef Land.

«Following journalists’ publication of misleading news about last year’s expedition, there appeared problems in our relationship with Norwegian aviation authorities, and these were so serious that we were forced to abandon our work in Longyearbyen in favor of Franz Josef Land».

According to Orlova, the developers of Barneo-2017 changed their minds after leading tour guides insisted that the Longyearbyen remain base for the activities.

«After half a year of negotiations on several levels we came to the following result: we return to our former cooperation, after all the complications of last year were not essential», Orlova says in the post.

It was the Barents Observer which in April last year first reported about Russia’s plan to use Longyearbyen airport for bringing in military instructors to an airborne drill in the Arctic.