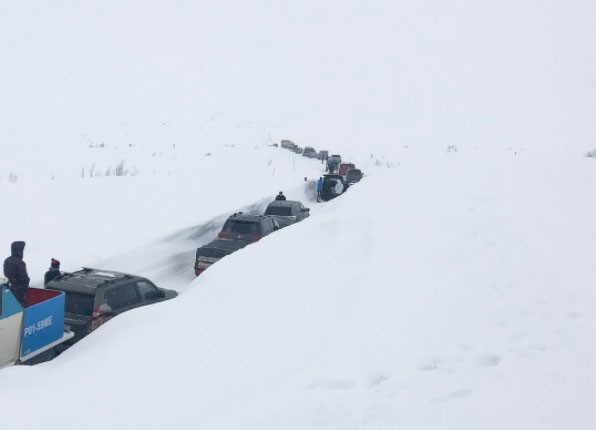 The road to Teriberka. Photo: Bloger51

What is promoted as the Murmansk "center of Arctic tourism" has been left without roads, food and water .
By

“Everything you need to get by is available here. Everything is business as usual.” quotes the regional government. Well, there is some grain of truth in this. But the lack of water, light, a hospital or a decent road in Teriberka, a northern coastal village in Murmansk’s Kola district, is also very normal for this region, isn’t it? It’s all just business as usual.

The roads to Teriberka and Tumani have both been closed since 26 March. We have never had such a situation or one that happened so suddenly. Eyewitnesses who went out to check out this situation on the first day of the storms managed to get back on time. But they found that one of the two snowplows that were working on that section of road had broken down and was sitting on the side of the road and the second one simply could not do the job all by itself.

As a result of all of this, the roads have been completely blocked for 12 days and it is unclear when the situation is going to change.  So far, three convoys have been sent to help. The first two went with coal for heating and food provisions. And on the third trip, an electrical repair group also had to be sent because of failures caused by short circuits which cut off all of the lights at two o’clock in the morning. Oh, and by the way, there are also problems with the water. The boiler rooms at the electric plant in Teriberka and Lodeni have carried on working on diesel fuel but there has not been any water for the homeowners, the school, kindergarten or the bakery.

Last spring, Aleksey Tyukavin, the first deputy governor of the Murmansk region, promised to make Teriberka the center of Arctic tourism. And probably such conditions that might have been found in the middle ages could be considered part of an “all included” tourist package. But during this misfortune, tourists who had come to enjoy their excursion unfortunately missed their flights because of the storm and have been sitting there since the storm began. Locals say that these guests have adapted to their situation rather well except for a slight problem in finding food. Normally, the stores are happy to take credit cards. However, on 31 March, the “Megaphone” Internet provider stopped functioning and so the credit terminals have all been also out of order.

“The store owners know the locals so they are happy to give them food in exchange for a signature. But for the tourists without cash, it has often not even been possible to buy bread.”

This was said by Yelena Krivonos, a local resident . On 5 April, power was restored and this at least let residents know that there will be enough fuel to keep the lights on for at least five or seven days. But what will absolutely happen if the road is not cleared by that time however is unknown.

On the plus side, the problems with food have been minimal except for a short time. In the week before the storm hit, normal supply trucks came and three local stores received food. And, as the town makes its own bread, there has been no problem going to the bakeries except for one day when there was no electricity and the bakeries couldn’t work. The bakers did go back to work the moment generator started again but the locals were so frightened that they bought every last piece of bread available including day-old bagels.

On the government website, there were no “freshly baked” releases about the end of the world. And by midday, the local news agencies were crowing that the electricity was restored and all would be good.

However, as soon as this news appeared on the web, indignant and resentful comments followed on VKontakte, the Russian social media:

“Can someone please tell me where they have supposedly repaired the lights in Teriberka? We still have no light in this village!!!!!”

To this, the administrator of the “Teriberka is the Beginning of the Lands of Russia” group answered:

“Elena, The VDKRK (The Murmansk All-Russia state television and radio broadcasting company) gave us this information. You need to address such questions only to them. But tell me the truth, are there still no lights even in old town Teriberka?”

“There is absolutely no light here. All of this is simply lies.”

And then again Solomakhina wrote to the “Teriberka” administrator:

“There are only two generators in Teriberka. One provides electricity to supply the town with cold water and this building has a giant tank on the roof. And the second generator is to boil water to generate electricity. But the point of this is that these are the only two buildings that have electricity.”

To this the administrator responds:

“Elena, we are waiting for the next repair team to come (and he provides a link)”.

And then Nikolai Zikin adds:

“There is no light, there is no water and everybody here has electric stoves. How are we supposed to cook? And the children are the ones who are suffering most of all. You can’t clean them and you can’t feed them. How can we be living in the 21st-century we have such a farce  in our little village. You can’t even go to the toilet here! I have no words, only emotions.”

Finally at about 4 o’clock in the afternoon, the lights and water finally came back on. And it should be added at this point that there had actually been a backup generator. But there was no access to it because either it was broken or there was simply no keys to get into the building where it was housed at the local substation.

The residents of the village feel though that this is probably not going to be their only chance for “autonomy” this year. The snow is wet and heavy and the two snow plows, assuming they can fix the broken one, cannot handle the load and most probably, we are looking at yet more breakdowns.

And this time by the way, the town managed to get by without the help of medical helicopters because of the good work of local paramedic Ivan Ilich, who has coped with the medical issues without needing any extra help.

Generally, though, in these sorts of situations, the locals are actually used to taking care of themselves. And usually it is because it is cheaper. The nearest polyclinic is in Kolya, 123 kilometers away, the buses there only run three times a week and cost 550 rubles (about ten dollars). And of course, if you are late to the polyclinic, you will end up having to stay in the local hotel and if it snows, you could end up being stuck for a week.

In the end, Elena Krevonos summed it up this way:

“Yes, we are used to this sort of thing. Everybody keeps bottles of water at home. We all keep portable gas stoves and we all store food. We always have these things and most probably, we are simply being tested on our ability to adapt and survive.”