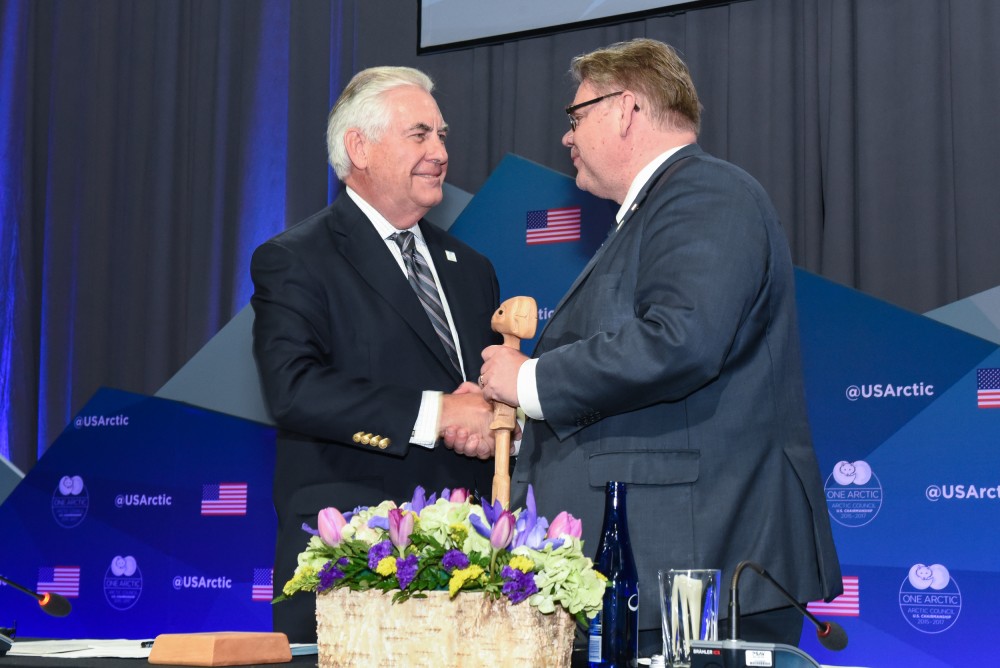 “The Arctic Council, which recently celebrated its 20th anniversary, has proven to be an indispensable forum in which we can pursue cooperation,” Tillerson said.

“I want to affirm that the United States will continue to be an active member in this Council.  The opportunity to chair the Council has only strengthened our commitment to continuing its work in the future.”

‘We have shared stewardship of this region’: Canada

Questions also swirled about whether tensions between Russia and the West would spill over into this week’s ministerial meeting as it did in 2015 when Russian Foreign Minister Sergey Lavrov boycotted the Iqaluit ministerial because of tensions with Canada over the Ukraine.  (Sergey Donskoy, Russia’s minister of natural resources and the environment was sent in his place.)

But in their opening remarks, foreign ministers from the world’s eight circumpolar nations confirmed their commitment to keeping the world’s geopolitical tensions out of the forum’s work, which focuses on environmental issues and sustainable development.

“The Arctic Council is so valuable to all of us, and very much for Canada, (because) it’s where we, the Arctic nations can set aside issues outside the Arctic and appreciate that we have shared stewardship of this region,” said Canadian Foreign Minister Chrystia Freeland.

The Arctic Council Agreement on Enhancing International Arctic Scientific Cooperation, signed in Fairbanks on Thursday, is the third legally binding agreement negotiated under the auspices of the Arctic Council and is an example of what the forum is able to accomplish, foreign ministers said.

The U.S.- Russia initiative will make it easier to move equipment, samples and data across borders in the North and facilitate scientific collaboration and sharing.

“While the Arctic is no longer terra-incongita, this region is still among the least explored,” said Russian Foreign Minister Sergey Lavrov. “(The agreement) signed today will give additional impetus to joint research with scientists from all our countries.”

But despite the united front, delegates were left hanging when it came to U.S. climate policy.

However, Tillerson sought to reassure the international Arctic community saying “we’re not going to rush” to make a decision, but that the American government would make “the right decision for the United States.”

“We are appreciative that each of you has an important point of view, and you should know that we are taking the time tounderstand your concerns,” Tillerson said in his opening address. ” The Arctic Council will continue to be an important platform as we deliberate on these issues.”

Finland took over the rotating two-year Arctic Council chairmanship from the U.S. on Thursday.

Their priorities include environmental protection, connectivity, meteorological cooperation and education.

Finland is also emphasizes the implementation of the Paris Agreement on climate change and the UN sustainable development goals, something representatives of eight Arctic Indigenous groups, or Permanent Participants, of the Arctic Council, praised during their remarks.

” In order to promote health and well-being in the Arctic we must balance environmental protection with economic stability,”said Canada’s Bill Erasmus, international chair for the Arctic Athabaskan Council, which has members  in Canada and Alaska.

“Climate change in the Arctic is not just an environmental issue, it is a matter of culture and our right to exist as Indigenous People.”