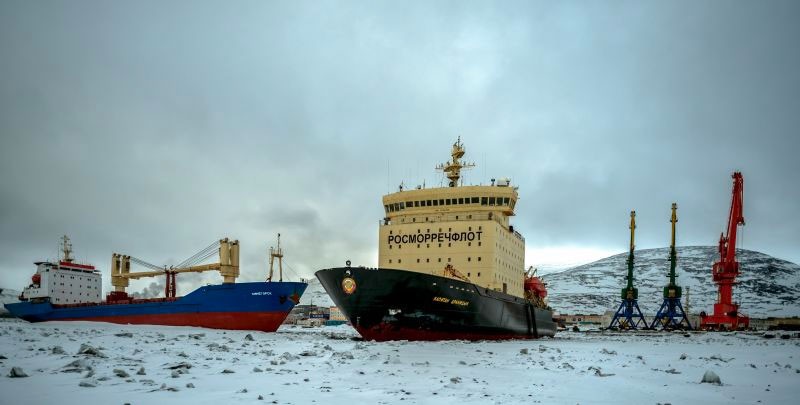 Icebreaker "Kapitan Dranitsyn" has been trapped in Pevek along with two cargo vessels since early January. Photo: Rosmorport

With the break-up of ice in the Russian east Arctic comes freedom for three ships and their crews.
Read in Russian | Читать по-русски
By

The icebreaker «Kapitan Dranitsyn» in early January escorted the cargo vessels «Johan Makhmastall» and «Sinegorsk» to Pevek, the port town located on the coast of the East Siberian Sea.

The voyage had dramatic consequences for the ships and their crews. With great difficulties they had made it to Pevek. But the ice conditions in the area made it impossible for them to return home.

It became a very long winter in one of the world’s most remote Arctic towns. Only in late May did «Kapitan Dranitsyn» start breaking its way out of the port.

According to Rosmorport, the state port development company, ice conditions in the area now allow for the movement of the ships out of the Pevek port.

It is not clear however whether the ships will be able to make their way all back to Arkhangelsk.  In a press release, Rosmorport says that «Kapitan Dranitsyn» and the cargo vessels are «changing their place of stay to a more secure site».

The latest ice data from the Russian Arctic and Antarctic Research Institute indicate that the waters outside Pevek now are ice-free. There is, however, still plenty of ice in remaining parts of the East Siberian Sea and the Laptev Sea.

With escort from «Kapitan Dranitsyn», the «Johan Makhmastall» and «Sinegorsk» had sailed from Arkhangelsk in late December. On board were construction materials for development of local port infrastructure for nuclear power plant «Akademik Lomonosov». The cargo was to help nuclear power company Rosatom to keep up construction works during the long winter season.

The failed voyage could have consequences for future shipping operations in the area.

According to Yulia Zvorykina, Head of the Severny Zavoz project office, measures are taken in order to prevent a similar situation.

«On an instruction from President Vladimir Putin, proposals are now made for an improved management system for the Northern Sea Route», she told TASS.

«That includes measures on the prevention of situations similar to the ones from last year», she adds.