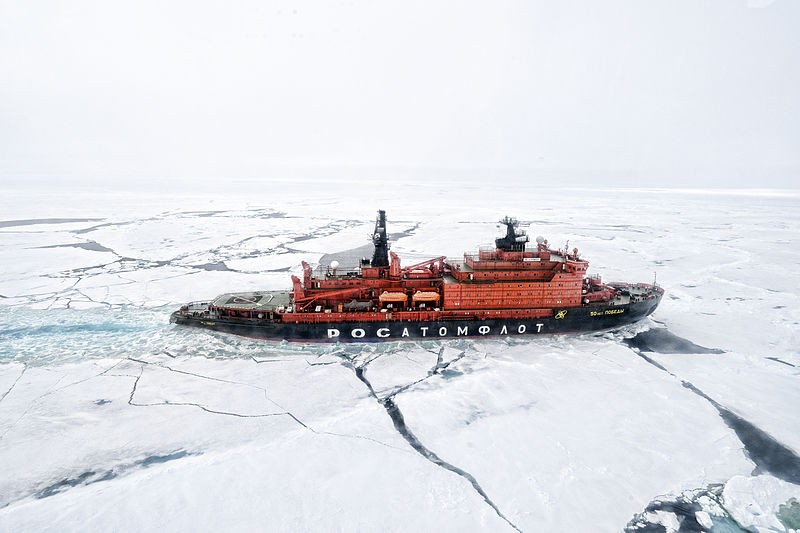 Thin ice and powerful reactors; Russian icebreaker «50 let pobedy» made it from Murmansk to the top of the world in just 79 hours.
Read in Russian | Читать по-русски
By

The Russian nuclear powered icebreaker arrived at the North Pole at 02:33 last night, news agency TASS reports. Only a few years ago, few would believe it would be possible to sail even a powerful nuclear icebreaker through the Arctic sea-ice in such a speed.

«50 let pobedy» left Atomflot base in Murmansk on August 13 on a voyage celebrating that it is 40 years since the Soviet Union became the first to reach the North Pole with a surface vessel. The nuclear powered icebreaker «Arktika» reached 90 degrees north on August 17, 1977.

The voyage with «Arktika» took 176 hours, more than twice the time it now took «50 let pobedy» to sail the same route.

Measurements by different science expeditions over the last few years have shown a thinning of Arctic sea ice, and partly full disappearance of multi-year ice. That makes it easier for an icebreaker to crush the ice and keep up the speed.

Satellite analyses from the National Snow & Ice Data Centre show an average sea ice extent for July this year to be the fifth lowest in satellite record.

When «50 let pobedy» clocked in at the North Pole today, it also marked the 124th times a surface vessel has reached the top of the world. An unknown number of submarines have also crushed through the ice and surfaced at the North Pole.

«This voyage has a dual objective», says Vyacheslav Ruksha, head of Rosatomflot, the company operating the fleet of nuclear icebreakers.

«We honor the legendary expedition of icebreaker «Arktika» and give gratitude to our veterans, and at the same time we demonstrate that today’s Russia, after forty years of successful work in the western part of the Arctic, is ready to take on global tasks such as providing year-round navigation on the Northern Sea Route».