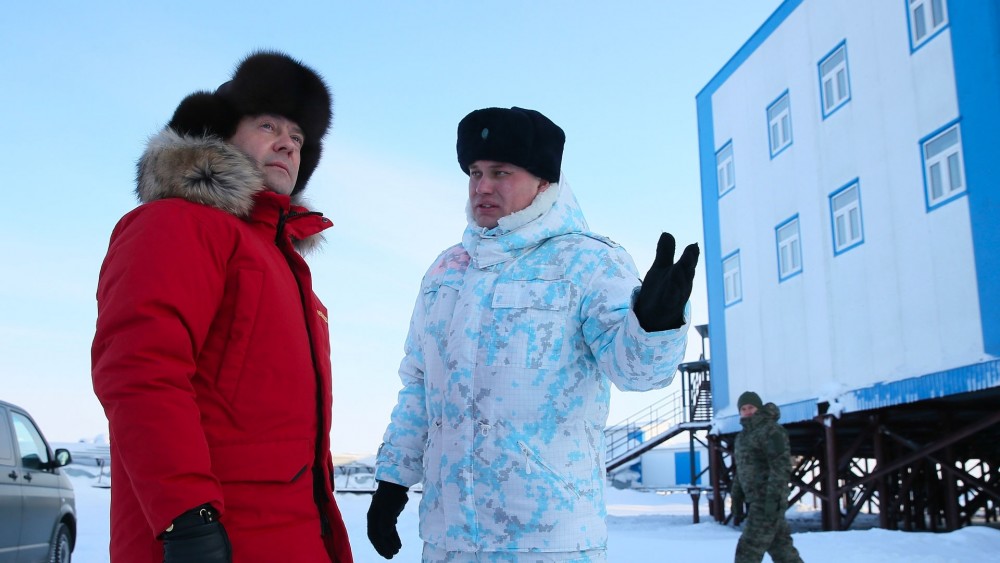 Medvedev is forced to reduce ambitions for Arctic development. Here from a visit to Franz Josef Land in April 2017. Photo: Government.ru

Ambitions are sky-high, but much hinges on private investments.
Read in Russian | Читать по-русски
By

«This is the main mechanism, with which we will develop the Arctic North», Prime Minister Dmitry Medvedev said today as his government adopted the new state Program on Social and Economic Development of the Arctic Zone.

The Premier admits that the former Arctic Program from year 2015 has an «analytical character» and that it first of all includes a set of planned measures.

«The program did not have its own normal financing, which of course did not correspond with the scope of our development plans in this unique region», Medvedev said in today’s government session.

The new Russian Arctic program has undergone major revision since the Ministry of Economic Development was commissioned to make a draft. The Ministry first proposed to allocated 209 billion rubles (€3.1 billion) of state cash to program implementation. Later, the sum was reduced to only 12 billion rubles (€177 million).

Originally, the program was to cover the period until year 2020, but in its last version the government decided to extend its scope to 2025.

In the program’s last phase, the period 2021-2025, the plan is to spend up to 150 billion rubles on program activities. This money, however, will first of all come from private sources. In addition, the sum includes money from the Ministry of Defense, Medvedev made clear in the meeting.

«We have huge infrastructure projects and we must solve the issue of industrial developments of the Arctic shelf, and develop technology and science for more efficient exploitation of the enormous resource base», the premier underlined in the meeting. «We must provide for national security in the Arctic and protect the ecology», he added, a transcript from the meeting reads.

Among the key program priorities will be the establishment of eight so-called support zones which are to provide for safer shipping in the area. Another key priority issue is the development and building of an ice-class drifting platform for Arctic research. The platform, which will get the name «North Pole», is to be used by the State Hydrometeorology Service for Arctic studies and ice measurements.

The Ministry of Economic Development originally wanted to include in the program the development of the new class of nuclear-powered icebreakers, the «Lider», as well as a fleet of vessels for Arctic environmental protection and shelf research. As much as 80 billion (€1.2 billion) was to be spent on the «Lider» alone.

That will have to wait. And might never come.

In today’s government meeting, First Deputy PM Dmitry Rogozin hinted that the «Lider» would not be built, although the ship already has been projected.