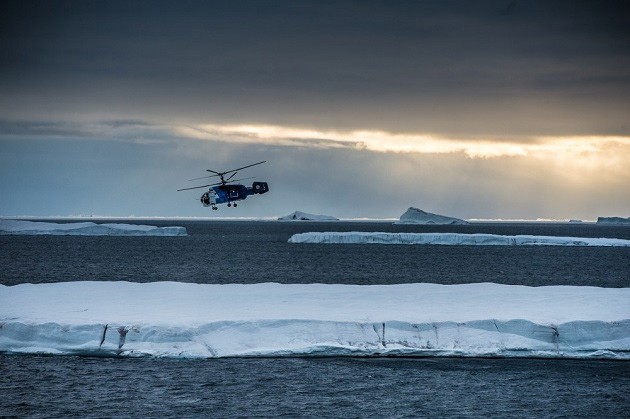 As companies step deeper into the Arctic, Russian oilmen and researchers together find ways to handle drifting icebergs.
Read in Russian | Читать по-русски
By

With funding from oil company Rosneft, a group of researchers spend 40 days in the northern parts of the Barents and Kara Seas to explore ways to move icebergs.

The Kara Leto-2017 is the second expedition of its kind. In 2016, the researchers successfully managed to move icebergs with a weight up to one million tons.

So far this year, they have moved icebergs with a weight up to 200,000 tons, Rosneft says. In addition to the towing operation of the ice, the researchers explore mechanisms for early detection and monitoring of ice formations. Two satellite radio beacons have been attached to a 75x35 meter iceberg and 3D scanning of the object made, the researchers say.

Involved are specialists from Rosneft along with researchers from the Arctic and Antarctic Institute and the Arctic Science Center, the latter a unit subsidiary of the oil company.

According to the Arctic and Antarctic Institute says the capacity to move icebergs is of key importance for offshore oil and gas developers. During the planning of the Shtokman field in the Barents Sea, the Russian field developers were challenged by up to 100 drifting icebergs, some of them more than three million tons heavy. The first research on ways to prevent collisions between icebergs and oil installations was subsequently conducted in the years 2004-2005, the Institute says.

This year, the researchers are accompanied by icebreaker «Novorossiisk», the new vessel based in Murmansk. According to ship owner Rosmorport, the icebreaking vessel set out from Murmansk on 10th September and is expected back in port by the end of October.