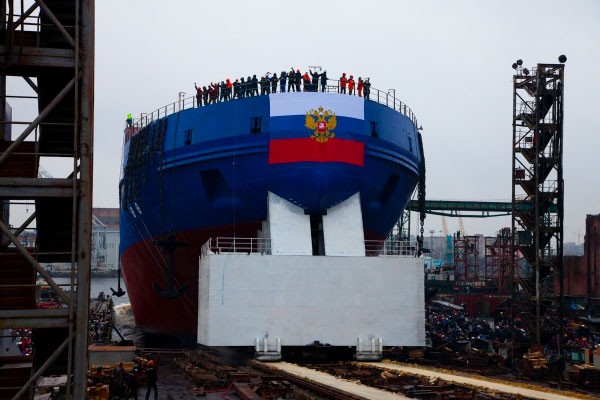 About 600 men are now working with the «Viktor Chernomyrdin», Russia’s powerful new diesel-engine icebreaker.
Read in Russian | Читать по-русски
By

The vessel, the first of the country’s new class diesel-engined icebreakers (Project 22600), is due to be ready for sailing in the course of late fall 2018. Time pressure is mounting on the shipbuilders at the Baltic Yard in St.Petersburg.

During a visit to the yard this wee, representatives of Rosmorport, the Russian state port authority, noted a «significant increase in speed of construction». Both the hulls and the topside are now fully complete and construction works are now concentrated on laying of cables, pipes and installment of equipment.

About 600 men are now working with the ship, Rosmorport informs.

Originally, the «Viktor Chernomyrdin» was to be completed in 2015. But technical problems and insufficient financing have haunted the project.

In 2016, representatives of the United Shipbuilding Corporation, the state-owned company, admitted that the project experienced delays because of sanctions, the weak ruble and a general price hike.

When the ship was put on the water in late 2016, General Director of the yard Aleksey Kadilov said that «this is a very complicated icebreaker».

«But victory will prevail and the ship will be handed over to the customer in 2018», he underlined.

It was Rosmorport which in 2011 submitted the construction order on the ship, which will be one of the biggest and most powerful diesel-engined icebreakers in the world.

The «Viktor Chernomyrdin» is Russia’s first LK-25 (project 22600) icebreaker. It will be 146,8 meters long and have a crew of 38. It will be able to operate autonomously for 60 days in up to two meters thick ice.