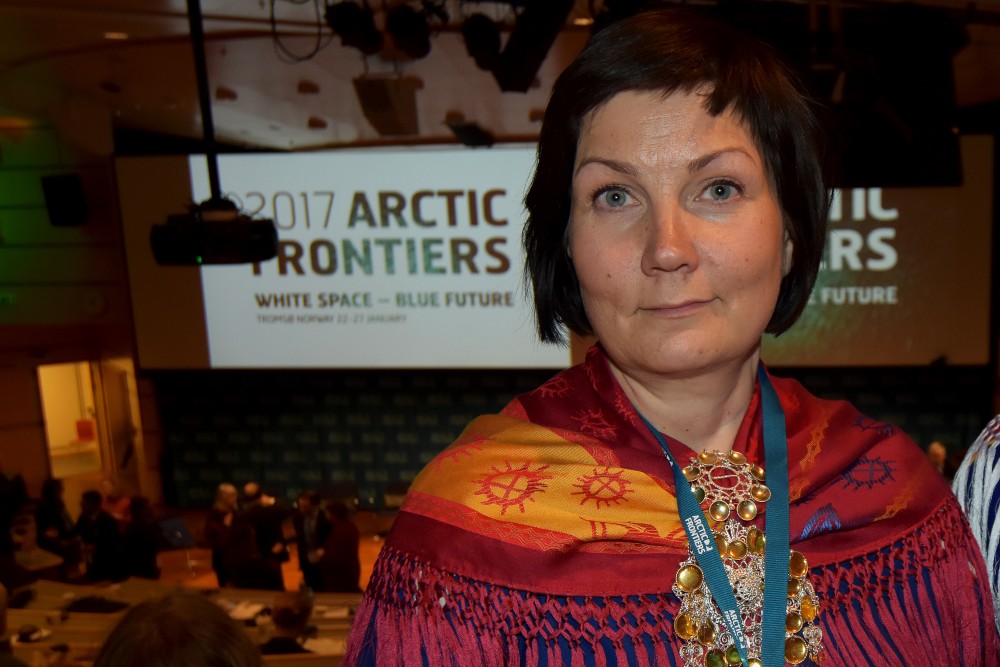 “It’s painting a glossy image, near to neo-colonialism.” President of Norway’s Sámi Parliament, Aili Keskitalo, calls for better dialogue with the people living up north.
Read in Russian | Читать по-русски
By

More than 90 percent of the speakers listed on the front page of Arctic Frontiers’ program for 2018 are from south of the Arctic Circle.

“Seen from outside, it’s painting a glossy image, near to neo-colonialism,” she says to the Barents Observer.

“I’m very positive that we can establish attractive forums in the north, but we ourselves should not be limited to be the audience.”

A quick review of the program a few hours before the opening reception shows that, yes, there are many speakers from the north, but only a few of them are listed in the main sessions. Out of 65 speakers highlighted on the front page, only six are living north of the Arctic Circle.

No less than 11 ministers, of whom eight are Norwegians, are profiled in top of the list of speakers. A conference tweet says 3,000 guests are coming to Tromsø for Arctic Frontiers that kicks off on Monday.

“It’s disappointing how many ministers throughout the time that have been invited to tell about the opportunities in the north, but have forgotten to mention the Sámi and indigenous peoples. The same goes for big industry players,” Aili Keskitalo says.

“This is still our homeland, not the last frontiers of civilization. And this homeland is populated with others than polar explorers and polar bears,” Keskitalo underscores.

Raising concern about lack of local voices at big events up north is nothing new. Last November, President of the Finnish Sámi President, Tiina Sanila-Aikio made it clear to all delegates at the conference Arctic Spirit in Rovaniemi: “Nothing about us without us.”

The slogan for the 2018 conference is “Connecting the Arctic.”

“We see that the Sámi President and Arctic Frontiers are enthusiastic about the same issue, namely strong sustainable communities in the north where all voices are heard. That we make sure our history about the Arctic is voiced,” Øvretveit says to the Barents Observer.

He points to more than 60 different debates to take place with participants from around the globe.

“Tromsø and the Norwegian north is a global display window for Norway as a driving force in the Arctic.”

Ole Øvretveit assures that the participants will travel home with an increased understanding about northern knowledge and competence. “With new friends from northern Norway, and not least with a understanding that there are people living in the Arctic.”

Keskitalo says she is glad to see that Åsa Larsson-Blind, President of the Sámi Council, now is invited to speak at the opening of the conference. The Council represents the Sámi people in all four countries; Sweden, Norway, Russia and Finland.

Keskitalo is, however, concerned about indigenous peoples and NGOs being marginalized

Additional to the Åsa Larsson-Blind with the Sámi Council, only two of the 65 main listed speakers are from non-governmental organizations. The two are Marius Holm and Anja Bakke Riise, both representing the environmental movement.

Nils Bøhmer, nuclear physicists with the Bellona Foundation, agrees with Aili Keskitalo that NGOs should get a much stronger voice when extractions of resources in the fragile Arctic environment is discussed.

“I support the need for Arctic Frontiers to become an arena also for NGOs, not only big businesses and their interests.”

Bøhmer points to one of the side-events taking place which will discuss radioactivity in the high north with perspectives for the Norwegian seafood industries. Here, only governmental institutions and the seafood industry itself are in the panel.