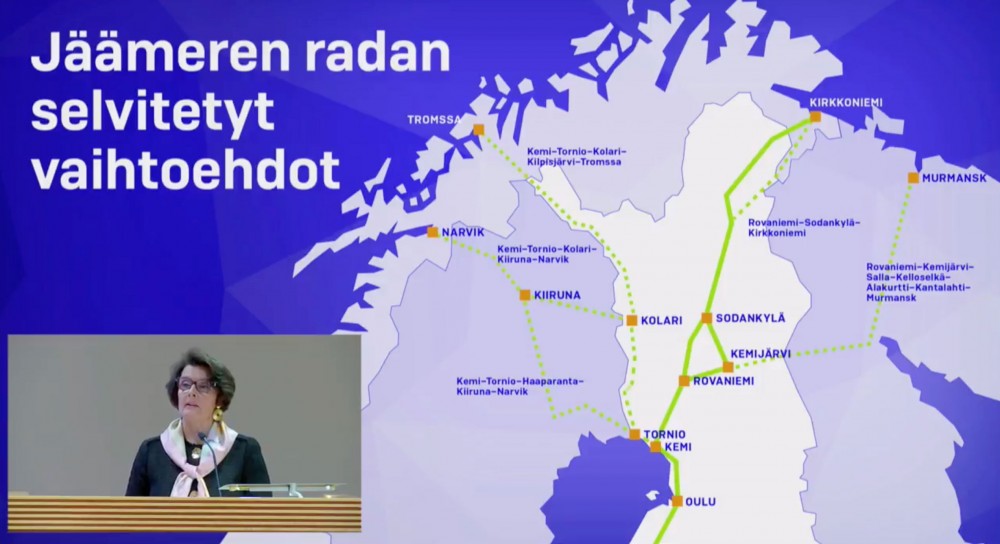 The small Norwegian town on the Barents Sea coast is the preferred end station in the great infrastructure project.
Read in Russian | Читать по-русски
By

The Ministry of Transport and Communications has decided that a railway routing to the Arctic Ocean via Oulu, Rovaniemi and Kirkenes is the one that will be examined further, Minister Anne Berner announced in a press conference today.

“The Arctic railway is an important European project that would create a closer link between the northern, Arctic Europe and continental Europe. The connection would improve the conditions for many industries in northern areas. A working group will now start to further examine the routing to Kirkenes,” the Minister said.

In a comment, Norwegian Transport Minister Ketil Solvik-Olsen says that “we wish to continue the excellent Norwegian-Finnish collaboration and look forward to contribute to the working group exploring further options regarding the Arctic railway route from Rovaniemi to Kirkenes.”

Minister Solvik-Olsen participated in the press conference via a video link. In the room were several of the people who have been working with the project over the last months and years, among them former PM Paavo Lipponen.

According to a report submitted to Minister Berner on 28th February, the estimated costs for the infrastructure project will be up to €2.9 billion. That includes €0.9 billion for the Norwegian side.

The Arctic railway would improve Finland’s logistical position and accessibility as well as promote connections with the whole of Europe, the document says.

«It would be an alternative transport route to be used in Finland’s imports and exports. The deep-water ports of the Arctic Ocean that are ice-free throughout the year would also open up a new connection to the Atlantic Ocean and Northeast Passage.»

Minister Anne Berner sent a first hint early this week. In an announcement to the press, she made clear that today’s press release about the railway project would be delivered not only in Finnish, Swedish and English, but also in the North Sami language.

The North Sami language is spoken primarily around Inari, an area located between Rovaniemi and Kirkenes.

In her presentation today, Berner admittd that there will be consequences for the indigenous Sami people in the area.

“The routing via Kirkenes will have impacts on the environment and economy as well as the industry and culture of the Sami. The studies describe the effects on reindeer husbandry and Sami people, but their extent was not assessed at this stage. These effects must be addressed in further studies,” she made clear.

Several potential routes have been assessed by a joint Finnish-Norwegian working group. But is was the Rovaniemi-Kirkenes alternative which was the one preferred by the experts.

“All the alternatives are technically feasible. However, there was a lot of variation in terms of financial aspects and environmental impacts,” says Director Matti Levomäki from the Finnish Transport Agency.

The  new report is a milestone for proponents of the project. Already in 2007 did then Kirkenes port director Oddgeir Danielsen announce that a Rovaniemi-Kirkenes connection would open up a unique European link to the Arctic Ocean. A Norwegian-Finnish railway project would be of significant importance for the EU non-member Norway, and help bring the region closer to European partners, he told the Barents Observer.

Several Norwegian towns have subsequently fought to become the end destination for the projected railway line. Today’s announcement spurred rejoice in Kirkenes, while there is disappointment in Tromsø and Narvik.

However, there is a long way to go before passengers can take a seat in the Rovaniemi-Kirkenes Express and goods can be loaded onboard the several hundred meter long projected trains.

The Finnish government says it intends to establish a new joint working group which is to determine further stages and schedules. It is to examine key questions relating to the chosen routing, including environmental issues, permit procedures, costs, and finance structure and model, Minister Berner says.

We are ready to contribute in this process, the Norwegian Ministry of Transport says in a statement.