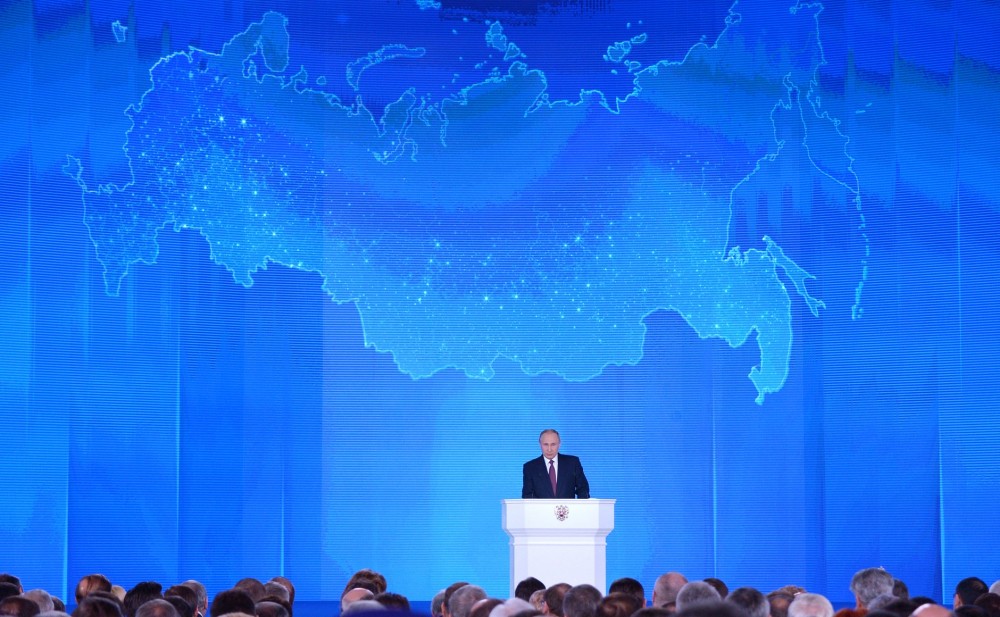 «Our Arctic fleet was, remains and will be the most powerful in the world.»
Read in Russian | Читать по-русски
By

Delivering his state-of-the-nation speech to the parliament on Thursday, Russian President Vladimir Putin highlighted the importance of speeding up the countries infrastructure developments. The Arctic plays a strategical important role in the plan.

«A number of large-scale industrial projects in the Arctic have already been launched,» Putin said and ensured those projects meet the strictest environmental standards.

«We are strengthening the scientific, transport, navigation and military infrastructure that will securely ensure the interests of Russia in this strategically important region.»

While Moscow temperatures, like in many other European cities this week is freezing cold, the high north sees a «heatwave» with some areas even above zero. With the Arctic sea-ice melting away, big shipping eyes longer sailing periods along the Northern Sea Route. So does the Russian President.

«The Northern Sea Route will be the key to the development of the Russian Arctic and the regions of the Far East. By 2025, its traffic will increase tenfold, to 80 million tons.»

Putin said the task is to make the Northern Sea Route a global, competitive transport artery.

«We will increase and we will reach new frontiers. There is no doubt.»

He pointed to the ingoing construction of new, and more powerful, nuclear icebreakers. «Our Arctic fleet was, remains and will be the most powerful in the world.»

Based in Murmansk on the Barents Sea coast, the fleet of nuclear powered icebreakers keep the Northern Sea Route open for shipping most of the year, especially the western part from the Taymyr Peninsula, through the Kara Sea to the ice-free Barents Sea.

On Tuesday this week, Putin meet with Rosatom boss Alexei Likhachev and talked Arctic shipping. The fleet of nuclear-powered icebreakers is state-owned and operated by Rosatomflot, a subsidiary of the State Nuclear Energy Corporation. In the meeting, Likhachev said at least 70 million tons of goods annually will be transported eastwards along the Northern Sea Route to markets in Southeast Asia. Addition volums, like ore and metals from Dudinka and oil from the Yamal region, will be transported westwards.

To meet the goals of increased transportation, Russia will need to build additional icebreakers, Likhachev told Putin and pointed to the new, even bigger Lider-class nuclear-powered icebreakers in pipe. «Icebreakers Lider with a power of 120 MW, is doubled the current ones,» he said. «Such a unique icebreaker does not exist in the world today and will allow us to develop the north at a pace that is currently in the plans of subsoil explorers, primarily Novatek.

Additional to the parliamentarians, among the audience listening to Putin’s state-of-the nation speech were also many of the country’s most powerful business leaders.