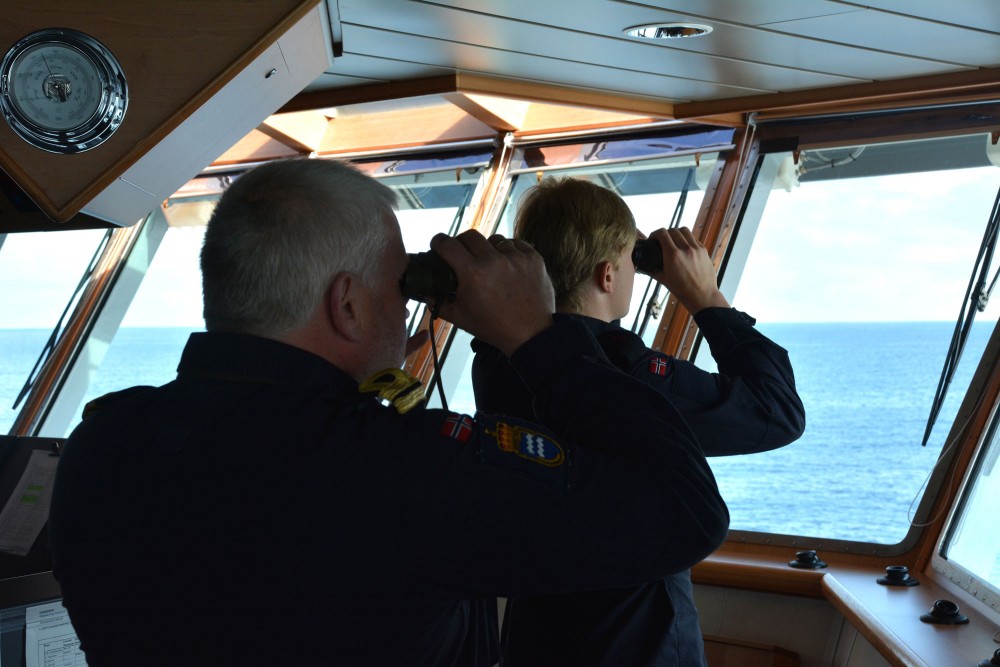 On the bridge of a Norwegian Coast Guard vessel. Photo: Atle Staalesen

Robert Brooks, Director of Economic and Industry Intelligence for the Canadian Coast Guard, said there is a common misunderstanding that climate change and melting ice makes navigation safer.

“But that’s actually not true,” Brooks told Eye on the Arctic in a phone interview from Ottawa. “As ice melts and climate change shifts and weather patterns become more extreme, navigation is actually becoming more complex in the Arctic.”

Even if the warmer climate contributes to longer seasons of ice-fee periods, it’s also opening up waters that are not properly charted and are less suitable for navigation, said Brooks, whose responsibilities include domestic and international Arctic policy for the Canadian Coast Guard.

“So mariners may be navigating or entering more dangerous waters,” Brooks said.

Also as ice melts in southern portions of the Northwest Passage, in particular, that allows for rapid shifts in the ice floe, he said.

“You can go from ice-free water to locked-in ice really-really quickly,” Brooks said. “So for us the risk is actually increasing.”

The rapidly increasing number of cruise ships, private yachts, bulk carriers, oil tankers and other civilian and military vessels transiting through the Arctic is forcing policy makers to consider ways of pooling their resources to be able to respond in case of an emergency in the Arctic waters.

In 2015, under the U.S. chairmanship of the Arctic Council, the eight circumpolar countries agreed to set up the Arctic Coast Guard Forum (ACGF), a consensus based group of circumpolar coast guards that focuses on issues of common interest in the Arctic, such as search and rescue, emergency response, and icebreaking.

The ACGF has emerged as one of the prime examples of such apolitical, pragmatic co-operation between Arctic states, expert say.

“Working with the other seven countries, our collective interests are aligned,” Brooks said. “We’re there to look at abilities to strengthen capacity for search and rescue and environmental response, and to make those responses more effective through co-operation.”

Participation in the ACGF allows circumpolar countries to better understand each other’s capabilities and operational culture, and gage what each country can contribute in case of a major emergency requiring the pooling of resources of all member countries, Brooks said.

“It gives us a chance to share knowledge, it gives us a chance to align our abilities to respond,” Brooks said. “And what is clear is that if you’re talking about a mass search and rescue incident in the Arctic or a significant environmental pollution incident, there is no one country that is capable to respond on their own in isolation.”

Thus the co-operation is important not only for the individual states but also for the collective interest in the Arctic, Brooks said.

To accomplish this goal the ACGF has been conducting both tabletop and live training exercises.

Representatives of the coast guards of Canada, Denmark, Finland, Iceland, Norway, Sweden, the Russian Federation and the United States, gathered in Oulu, Finland last week for a series of annual meetings of the ACGF Experts and Principals.

Brooks, who was part of the Canadian delegation to the ACGF meetings in Oulu, said the summit in Finland provided an opportunity to take stock and learn lessons from the first live exercise.

Codenamed Arctic Guardian, it was held in September 2017 off the coast of Iceland and involved coast guard vessels from Canada, Denmark, Iceland, Norway and the U.S.

The lessons learned from the Arctic Guardian will be incorporated into the next live exercise being planned for the beginning of 2019 off the coast of Finland, which in 2017 assumed the two-year rotating chairmanship of the Arctic Council and the ACGF.

“It sounds simple in theory but when you’re working internationally in a live operation with other countries whose second language or third language happens to be English, it really underscores the importance to speak clearly on the radio, it really underscores the importance of common nomenclature, because when you’re dealing in the world of life and death or you’re dealing in the world of direct orders, we need to make sure that everybody understands in exact same way.”

Another valuable lesson from the Arctic Guardian was learning to identify the on-scene commander who will be in charge of the international incident and how to build teams for an effective response, he said.

“Things like how you actually gather your situation reports and briefs so that everybody has the same situational picture,” Brooks said. “The integration of the countries’ assets and how to use those effectively, there were some really good lessons around that.”

Exercise participants also started learning which of the different helicopters used by each country can land on each other’s vessels, Brooks said.

The meeting of ACGF experts and principals coincided with a meeting of the Arctic Council’s Emergency Prevention and Pollution Response (EPPR) working group and an Arctic oil spill response exercise and seminar organized by the Finnish Environment Institute in close co-operation with Swedish Coast Guard.

“It’s very difficult for example to deploy booms when you’ve got floating chunks of ice moving around,” Cowan said. “You have the challenges associated with some of the oil sticking to the blocks of ice, there is the risk as well that oil gets below the ice, which makes it that much more difficult to try and gain access to.”

Cowan said the seminar, the tabletop and live demonstration exercises provided a great opportunity to see some of the state of the art technology that is being developed to respond to oil spills in Arctic or ice-bound waters.

“We learned a lot watching some state of the art equipment actually being used in ice conditions,” Cowan told Eye on the Arctic. “There was a lot of new technology that was deployed for this exercise, including observation drones and oil spill recovery brushes that are specialized for use in icy waters.”

Cowan, who is part of the EPPR Marine Environmental Response Expert Group that met in Oulu, took part in tabletop exercises that started even before the experts met in Oulu.

“It was an interesting exercise to test the procedures, the protocols, the operational guidelines for mounting a combined response with a number of Arctic communities in the event of an oil spill,” Cowan said.

“We went through all the motions of securing the assets and expertise but did not actually deploy them since ours was a tabletop exercise,” he added.

It’s not clear yet whether the Canadian Coast guard will send a vessel to take part in the 2019 exercise off the coast of Finland, but Canada will definitely send some of its top experts to participate in the exercise, Brooks said.