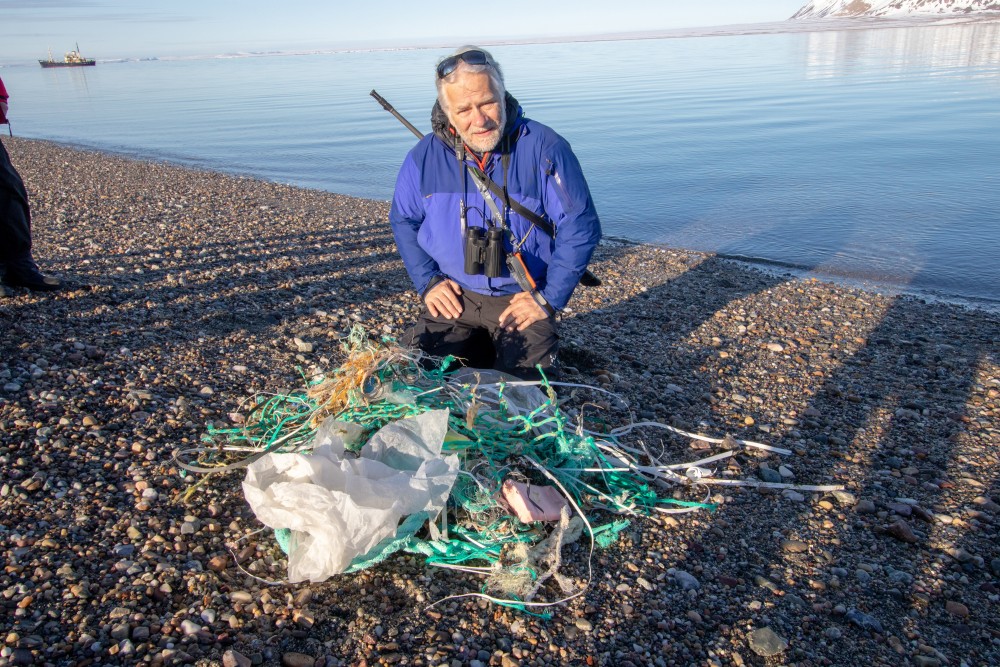 Mats Forsberg has sailed expeditions on Svalbard since 1982 and is shocked by all plastic waste he found this year.
Read in Russian | Читать по-русски
By

“This is what I found during a short 200 meter walk along the shoreline of Sorgfjorden on the north coast of Spitsbergen,” Forsberg tells to the Barents Observer.

“Where ever I go ashore it looks like this,” he says with a sad voice. “Its an illustration of how the archipelago looks today.”

Mats Forsberg has been staff member on expedition ships in the Arctic longer than most others and have sailed around the islands at Svalbard tens of times. The changes are dramatic.

“In the beginning, Svalbard was a pristine and beautiful wilderness. Today the archipelago has become a rubbish dump,” Mats Forsberg explains.

He says the plastic garbage has become much more eye-catching over the last five to ten years. “Its there, everywhere we go on shore. From the west coast of Spitsbergen, around the archipelago to the north coast of Nordaustlandet and the northernmost Karl XII-øya and Kvitøya.”

Forsberg has a clear idea about where to put the finger of blame.

“Most of the plastic waste we find comes from the fishing fleet operating in the Barents Sea and the North Atlantic.”

Fishing is today allowed in the Hinlopen Strait, a 150 kilometres long and up to 60 kilometres wide passage between Spitsbergen and Nordaustlandet. Earlier, this strait was difficult to sail with fishing gear because of pack ice. Nowadays, like this summer, the ice is all gone.

“It is actually sensational that it is still allowed to fish and trawl in the Hinlopen Strait. This is inside Nordaust-Svalbard Nature Reserve,” Forsberg says. Covering more than 55,000 square kilometres both on land and water, it is the largest preserved area in Norway.

“Hinlopen is a fantastic marine area with genuine qualities, its important for polar bears, there are 5-6 larger locations for walrus, it’s a lot of whale, including blue whale, fin whale, mike whale and beluga whale,” Mats Forsberg tells and adds the important sea bird colonies.

“The majority of biodiversity, variety of life is found in the sea. It is completely impossible to understand why Norwegian authorities continue to allow for fishing inside the 12 nautical miles boundary around Svalbard. It should all be maritime nature protection area where fishing should be banned.“

Mats is not first of all worried about how all the plastic garbage could negatively affect tourism with visitors sailing in on a growing number expedition ships.

“It is the fishing industry itself that should be worried. Plastic waste and pollution seriously damage the ecological system of the Arctic,” he says.

This winter, the Norwegian Institute for Water Research (NIVA) published a report painting a grim picture of microplastics findings along the mainland coast to the Barents Sea. Here are the highest concentration of microplastics in blue mussels found anywhere along the coast of Norway.

“The Barents Sea is becoming destroyed by two main factors; plastic pollution from the fishing fleet and warmer waters caused by climate changes. I’m worried about how the cod will survive in the future. And, opening for more oil drilling doesn’t make it better.”

“What will be left 50 to 75 years from know when the oil is finished,” Forsberg asks.