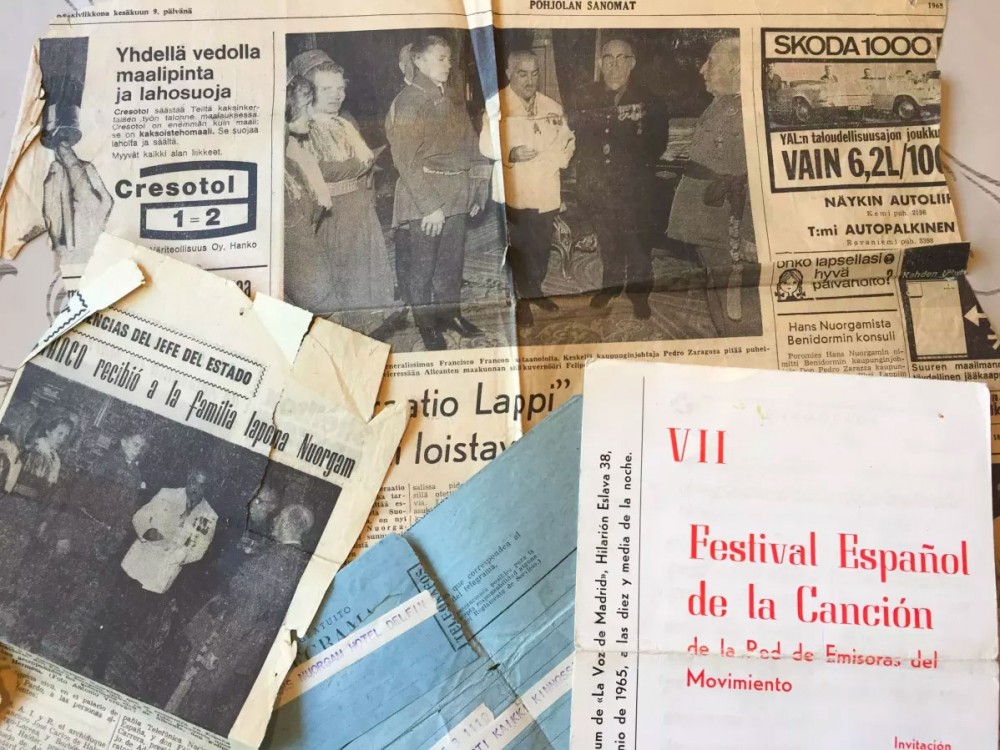 In the course of history, Sámi have ended up in a variety of places for the sake of promoting tourism. A family from Utsjoki, Finland, even visited Dictator Franco’s palace in 1965.
Read in Russian | Читать по-русски

Karoliina Nuorgam and Hilma Mustonen from Kaamasmukka in Utsjoki look at press cuttings from the year 1965. The mother and the daughter reminisce about the summer when their family visited the palace of Francisco Franco, the Spanish Head of State.

At the time, the Northern Finnish newspapers Pohjolan Sanomat and Lapin Kansa wrote articles on the return of the Nuorgam family from Spain. The Sámi family had got a great deal of attention in the Spanish press.

The Spanish national radio channel also noted the visit of the family, publishing news on their meeting with Franco.

What took an ordinary Sámi reindeer-herding family into a European dictatorship and Franco’s palace?

Francisco Franco was a Spanish general, who became the leader of Spain in connection with the Spanish Civil War. He reigned the country as a dictator from 1939 to 1975. At the time of the Nuorgams’ visit, Francisco Franco had ruled over Spain for more than twenty years.

Karoliina Nuorgam and Hilma Mustonen (b. Nuorgam) recall that the family never really understood why they got, through Finnish contacts, an invitation from Franco. However, the family was told that the ruler of Spain wanted to meet an ordinary Sámi family and learn more about their culture in the Arctic.

«Our friend Eino Repo, who was a chief of guards, had been informed that Franco wanted to meet a Sámi family. He had invited the family to his palace in Madrid,» Karoliina Nuorgam recalls.

The family started its trip to Spain from Kaamasmukka, Utsjoki, in May 1965. The father Hans, mother Karoliina and the teenage children Hilma and Eino first took an airplane from Ivalo to Helsinki. From there, they flew to Madrid the next day.

Hilma Mustonen says that the trip was very exciting for a 14-year-old girl who had never even been on a plane, not to mention being abroad. Amused, Mustonen remembers what happened during the trip. When the family tried to catch their connecting flight they almost missed the plane.

«At some point, we arrived at one more airport. I looked up and said to my brother that the plane in the sky was the one we were supposed to be on.»

To their dismay, they had missed the plane, which was now on its way to the destination without them; they had a wrong time of departure in their tickets.

«Fortunately, our party included Pentti Halonen, who held a prominent position in Finnair. He went and told the company’s representatives that we had missed the plane. As a result, the plane turned back to fetch us from the airport,» Mustonen laughs.

Karoliina Nuorgam recalls that the front part of the plane was emptied because of the family.

«They moved the other passengers further back, and we were placed in the front row. The other passagers did stare at us, wondering who we were.»

Tourism has been part of everyday life in Sápmi, the Land of the Sámi, ever since the 1800s. Researcher Marjut Aikio and former Sámi politician Pekka Aikio write in their essay “Sámi culture and tourism” that contracts had been made with some Sámi that they would come to meet tourists and show them reindeer. The exotic Sámi were thus one of the reasons for traveling to the North.

The trip the Nuorgam family made to Spain is connected with the same phenomenon. Quaintness was used to promote tourism to Lapland and Finland. The Finnish newspapers that reported on the trip – Pohjolan Sanomat and Lapin Kansa – wrote that the Operation Lapland in Spain was a great success and the Nuorgam family did excellent work in promoting tourism.

«We can already report that Finland has probably never, in times of peace, received as much attention in Spain as this past week. A Sámi family appeared several times at a range of occasions on the Spanish television.»

Pohjolan Sanomat described the trip of the Sámi family as an extraordinary example of what we have in Finland. According to the article, the 15-minute meeting the Nuorgams had with Franco was reported on the national radio channel throughout Spain.

«Though the reception of the Head of State was attended by many important groups, all the newspaper reports dealt with and published photos of the Sámi family. In most papers, the photographs of the family were on the front page.»

The Sámi family attracted more attention than the delegations of other countries visiting Franco’s palace at the same time.

Karoliina Nuorgam still remembers how she got ready for the trip by sewing new traditional Sámi clothes for the whole family.

«Before the trip, I had to sew new clothes and make the accessories that go with the dress in a very short time.»

Hilma Mustonen reminisces that they had to represent Finland throughout the trip in their Sámi clothing. Therefore, the family drew attention wherever they went.

«The Spanish press published big photos and interviews with wide headlines on the family, and they were presented as an example of the special things you can find in Finland and Lapland.»

«We visited a lot of different places, and it was really hot, incredibly hot. We were wearing our dresses that were made from broadcloth, and we had to put them on every morning, with silk shawls and everything. It was quite a performance,» Mustonen says, laughing.

It was a great relief for the family to return to the hotel in the evening.

«As soon as we got to the hotel we took off our dresses. We needed a rest, Mustonen reminisces about the trip that took place some fifty years ago.»

Finland was also introduced to the Spanish public in other ways during the trip. The Nuorgams participated in a music event called Festivál Español de la Canción, in which the mother of the family, Karoliina Nuorgam, was supposed to perform accompanied by professional musicians.

«It was an evening concert, and I was supposed to sing in Sámi. I didn’t want to yoik, so I decided to sing a hymn. The words went sort of like this: “The Norwegian man in his house has protected our country. Despite the dark, our father went to war and mothers wailed. Our Lord helped us to victory.”

«That’s what I sang. I have no idea what the song was,» Nuorgam reminisces.

It is now fifty-three years since the Nuorgam family visited the Spanish Head of State Francisco Franco. Karoliina Nuorgam and Hilma Mustonen remember the trip well.

Looking at the press clippings, Hilma Mustonen recalls her teens. Before the trip, she did not even know that there was a country called Spain.

«Being a teenager from a small village, I didn’t analyze the trip so much, but now it seems like quite a “vacation trip”, Mustonen sneers.