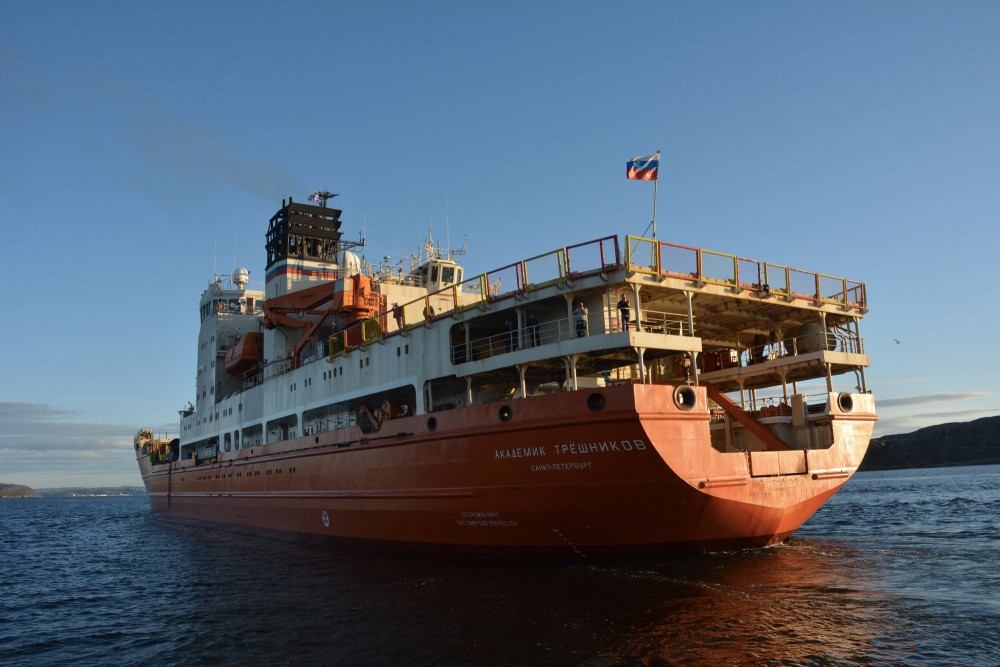 More than 50 oceanographic researchers are on board Russia´s polar research flagship «Akademik Tryoshnikov» as it makes its way towards the Laptev Sea and East Siberian Sea.
Read in Russian | Читать по-русски
By

«The ice has not only become thinner, but also less strong. It is much easier to break with a ship,» says Rob Rember. He is assistant professor at the University of Alaska Fairbanks and a key facilitator for the NABOS-expedition that currently is sailing into Russian east Arctic waters.

On board the «Akademik Tryoshnikov» are researchers from several countries, most from Russia, the U.S and Germany, but also Korea and Norway are represented. Their route goes from the Norwegian town of Kirkenes, to Arkhangelsk and from there further eastwards, all the way to the East Siberian Sea.

It is a 52-day voyage into the most remote and inhospitable waters on earth.

Rob Rember has spent months to prepare for this year’s expedition. It is his fourth voyage of the kind. And he has seen rapid and dramatic change.

«The strength of the ice is changing,» he says to the Barents Observer as the «Akademik Tryoshnikov» is about set out from Kirkenes. «When I visited the Arctic first time in 2000, we had two meter thick ice that was very difficult to break. In 2015, when I was in the same area at the same time of year, the ship could hardly stick its nose into 1,4 meter ice before it cracked and split,» he explains.

«The ice is simply getting very rotten.»

The quick changes in ice conditions are leading to change also in economic activity as well as political interest. As the  «Akademik Tryoshnikov» makes its way eastwards through the Russian Arctic waters it is not unlikely to meet LNG tankers shuttling to and from the Yamal Peninsula, offshore supply ships working for oil companies, or naval ships on their way to new and upgraded bases.

Just few years ago, the researchers would not spot another ship for weeks as they sailed through the area.

The researchers have been there before. Since 2002, the NABOS project have provided unique climate research from Russian east Arctic waters. Moorings with advanced technology have been placed in the sea and given insights into the way warmer water affect Arctic ice. A total of 11 expeditions have been made, all rooted in a close U.S-Russian collaboration.

This year, however, is different. The expedition was originally to be held in 2017, but was cancelled last minute as Russian authorities held back necessary permissions. No explanation was offered by Moscow, but everyone assumed it was because of politics.

Both American and Russian researchers despaired. In the Laptev and East Siberian Seas was valuable equipment with unique data. But they were not allowed to go there and pick it up.

A year after schedule, the NABOS is now back in the region. But not everything is like before.

It is regrettable, Rob Rembler admits. But it will not put a stop to the research efforts in the area. The research equipment will continue to be deployed in the international waters outside the Russian Economic Zone where the project has maintained a subset of moorings since 2002.

«It will not be our last expedition. And if the politics change, the project could go back to what it used to be in the future», Rember says.

The 133 meter long «Akademik Tryoshnikov» is the flagship of Russia’s polar research fleet. It is operated by the Arctic and Antarctic Research Institute (AARI) and has a crew of up to 60 people. As it sails eastwards, three groups of researchers engage in activities. In addition to the members of the NABOS, on board are representatives of the German GEOMAR’s CATS project and the T-ICE project operated by the Alfred Wagner Institute.

The Germans have six moorings, while eight belong to the University of Alaska Fairbanks.

It is the moorings that provide the key data. Instruments are connected on wires and travel from about 50 meters depths to 750 meters depths every day. It is a motor-driven device and goes up one day and down the next. Every day, a profile of that specific piece of water is compiled.

With the data collected in this year’s expedition, the NABOS researchers will get an additional three years of high-resolution data, and be able to make far stronger assumption about the situation.

PhD student Till Bauman from the Alaska University is one of the researchers analyzing the collected data.

There is no doubt about the dramatic change going on, he makes clear. The data show a rapidly increased heat flux from the Atlantic water into the top layer of the Arctic.

«It is changing the internal structure of the ocean, and parts of the Arctic are now actually becoming like an extension of the North Atlantic,» he explains.

«The Arctic ocean is unusual because there is cold water on top of cold water, and the cold water basically protects the sea ice. And now the Atlantic water, which previously was layered below, is weakening the stratification and  makes heat go up easier. The layer of insulating cold water is heating up».

It is the explanation why the melting is going so quickly, the researchers argue. They are confident that at least 50 percent of melting takes place from below, and believe it affects the whole Atlantic part of the Arctic.

The prospects look grim for the white Arctic sheet. The amounts of heat coming in are big enough to ultimately melt it all.

James Dunn has been on several Arctic expeditions and previously visited the Laptev Sea and East Siberian Sea.

«I do not expect to see a lot of ice floes this time,» he says. «But there is likely to be plenty of high winds and snow.»

Dunn has himself invented several devices applied by the researchers. Among them is a powerful instrument that can drill through up to four meter thick ice in only eight minutes.

Previously it would take two hours. But the ice on this expedition will not be thicker than 1,5 meters. And the quality will be bad, Dunn makes clear.

«The ice is much more degraded than before. On top, about 30-40 cm of hard ice and underneath lots of rotten ice.»

He underlines that cooperation between the researchers is smooth.

«It is excellent that we can do this together with the Russians, they are very good, helpful, friendly and we never have a problem.»

There is a common ground in Arctic research and there is never any talking about politics, he argues.

«You would think there would be, but there is no politics on this ship. We do not talk any politics, not even over the dinner table. Zero.»

We simply do our jobs, Dunn underlines.

But underneath his and the other researchers’ words can be sensed a careful consciousness about the political sensitivity of the work they are doing. In a quickly changing Arctic, big politics is not far away. And with the research data that now are coming on the table, it becomes increasingly evident that the new state of the Arctic could rock the world.