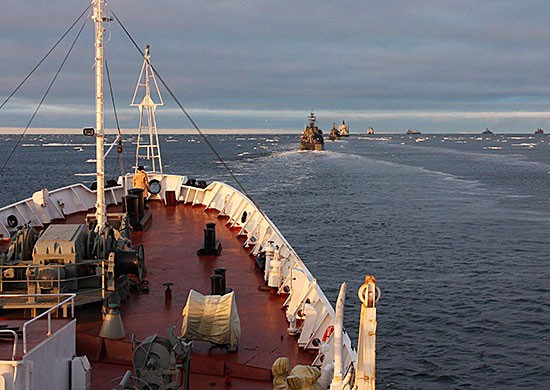 Navy vessels on the way into icy waters. Photo: mil.ru

The top official from the Ministry of Defense reportedly stole 90 million rubles earmarked mapping of the Russian Arctic shelf.
Read in Russian | Читать по-русски
By

Leader of the Russian Defense Ministry’s Department for Navigation and Oceanography Sergey Travin in 2015 approved a 90 million rubles transfer (€92.000) to company Prominvest. Two years later, that money has got the military official and his two associates into serious trouble.

A court in St.Petersburg this week started hearings in a case against Mr Travin, his deputy Leonid Shalnov and a representative of a state cartographic company. All are charged with large-scale fraud, newspaper Kommersant reports.

According the prosecutors, the tender process was bases on a scam and company Prominvest won the contract as part of an illegitimate process. Furthermore, they argue, there simply was no need for the kind of mapping outlined in the tender. The contractor was to provide space imagery of the Arctic shelf allegedly needed for new and updated navigation maps.

The hearings in St.Petersburg shed light on some of the details in the case against Sergey Travin and Leonid Shalnov. However, court proceedings soon came to a halt. According to the prosecutors, the Russian state program on Arctic development includes a number of classified documents, and further proceedings will be held in the Leningrad regional military court, Kommersant writes. The fate of Sergey Travin and his associates might never make it to the public.

Sergey Travin and Leonid Shalnov both held key positions in the Russian intergovernmental body that prepared the country’s updated bid to the UN Continental Shelf Commission. The body,  established by Minister Sergey Donskoy in 2014, coordinated Russia’s comprehensive mapping of the Arctic shelf and the subsequent submission of the updated application in August 2015. The bid includes the expansion of the continental shelf by up to 1,2 million square kilometers.

The two officials have been instrumental in the expanding activities of the Ministry of Defence in the shelf mapping.

A number of new vessels designed for hydrographic mapping are now under construction by the Russian Armed Forces, and several of them will operate in the Arctic. Over the last five years, more than 25 major hydrographic expeditions were organized by the Armed Forces. Among them were comprehensive Arctic voyages of the vessels «Vizir», «Gorizont» and «Senezh» in 2017.

In a comment made to the website of the Armed Forces, Sergey Travin in 2017 said that Russian oceanographic vessels recently have discovered 11 new islands, nine peninsulas, six straits and five fjords in the Arctic.

Furthermore, the mapping has been instrumental in expanding the Russian continental shelf by thousands of more square kilometers and secure the country’s legal rights over central parts of the Barents Sea shelf, he said.