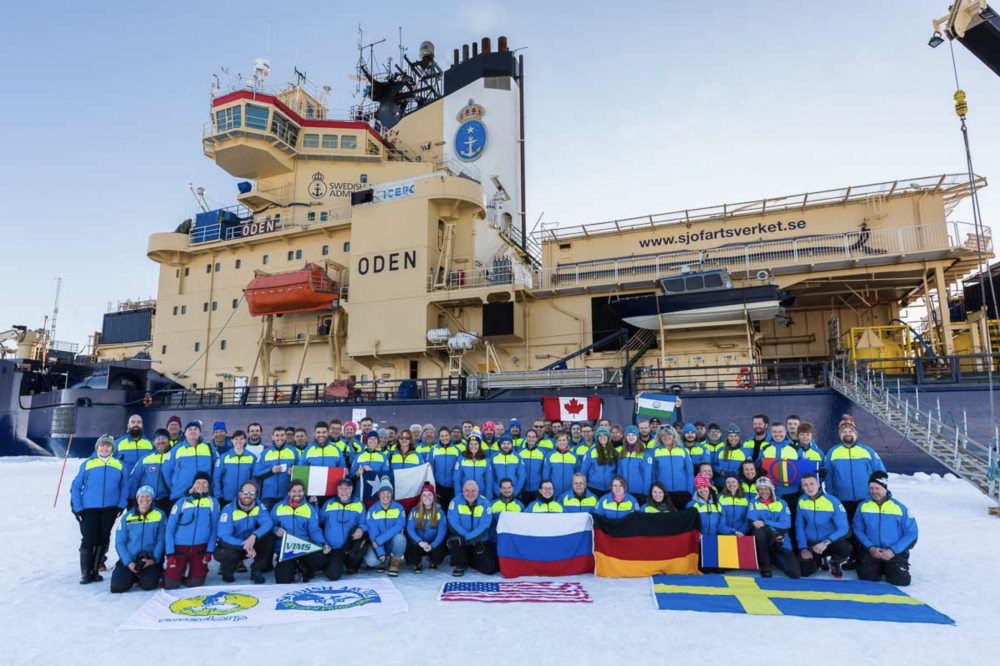 Science expedition sails north to find link between formation of Arctic clouds and record heatwave and drought on mainland Sweden.
Read in Russian | Читать по-русски
By

Sweden this summer has suffered the most wildfires in modern times in what might be linked to human-caused climate changes. While emergency services got help from other European partners to fight the blazes, the Swedish Polar Research Secretariat embarked on board the country’s most prominent icebreaker, the «Oden».

This Sunday, «Oden» crushed the last miles of sea ice and reached the top of the world, 90 degrees north, with an on board group of 40 researchers from around the globe. Main goal: to study how the formation of clouds in the Arctic affects the the climate in times of melting pack ice.

Expedition «Arctic Ocean 2018» is a Swedish-American research project that will last until late September.

Professor Caroline Leck with the Stockholm University is Co-Chief Scientist for the expedition.

«Clouds play a central role in the Arctic climate. Consequently, we must rise to the challenge and carry out onsite studies into the link between life in the sea and cloud formations, a logistical and technical challenge beyond the ordinary in inhospitable and inaccessible areas of the North Pole,» Leck says.

She points to the fact that deglaciation has occurred faster than anticipated. «Perhaps the Northeast Passage will be passable by merchant vessels as early as in then year’s time,» she suggests. «If so, it would have a huge impact on the dynamics of international political economy.»

At the top of the world, the icebreaker «Oden» will be moored to a large  ice floe for the next month. Researchers will here take measurements and collect vital statistics from the sea, ice and air, trying to find out how the varying parts of the complex Arctic systems are linked together.

With a better knowledge of how climate changes affects the Arctic, the researchers hope to get better methods to predict climate of the future.

For the formation of clouds, aerosols originating from microbiological life in the sea and ice is important. One question is what happens when more sea opes up as the sea ice around the North Pole melts; will that lead to more biological particles bubbling out to the atmosphere, causing increased cloud formations? If so, will more clouds cause earlier freezing season in the Arctic, the researchers ask.

The mystery on how clouds impact Arctic climate was not to be answered on arrival, the first day at the North Pole provided the international science crew with clear skies and Midnight Sun.

Meanwhile, on mainland Scandinavia, meteorologists concluded that July’s heatwave was breaking all earlier recordings in time of monthly measuring of temperatures dating back to as early as 1756.