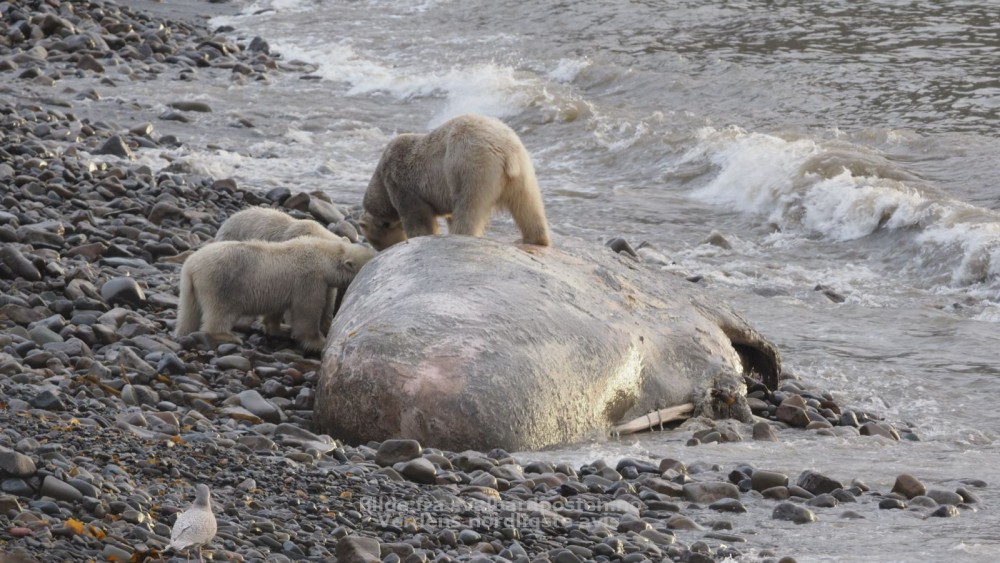 Photo: The Governor of Svalbard

The whale that this week stranded on the shores near Longyearbyen, Svalbard, should have been used as attraction for tourists, says local researcher Bjørn Frantzen.
Read in Russian | Читать по-русски
By

The polar bears with great delight ate from the dead whale that drifted ashore in Isfjorden, near Longyearbyen. But the joy of the bear mother and her two cubs did not last long.

On Monday, the local Svalbard Governor decided to remove the dead animal and the cadaver was towed out at sea. The bears were driven away by the guards from the governor’s office. The site is located only few kilometers away from Longyearbyen, the local town with a population of about 2,000.

Photos taken by the Governor’s Office and published by local newspaper Svalbardposten show the vessel «Polarsyssel» towing the animal to sea.

Not everyone is happy with the decision. Instead of towing the dead whale to sea and let it sink, it should have been towed to a safe place where the polar bears could continue their feast, says Bjørn Frantzen.

The researcher and senior adviser for the Norwegian Institute of Bioeconomy Research (NIBIO) argues that the dead whales regularly drifting ashore on the Arctic archipelago can serve as great tourist attractions.

«The authorities should together with the local population and tourist companies positively look for places that are suitable for stranding of dead whales,» he says to the Barents Observer.

«Let the dead whale become a resource for local tourism,» he underlines.

Currently, local authorities in Svalbard always tow dead whales out at sea. But time is ripe for a change in that practice, Frantzen argues. «After all, we Norwegians love to go to exotic places to experience big predators, and when it happens abroad we think that it is quite ok.»

According to the researcher, the dead whales should be towed to a beach where they do not pose a threat to people. Then, tourist boats could come to site to view the polar bears.

A dead whale can provide food for polar bear for many months. When a dead bowhead whale stranded on the Russian Arctic island of Wrangel in fall 2017, it attracted more than 200 polar bears.  There was food enough for everyone and tourists got the sight of their life as their cruise vessel passed the site.

«The attraction would be predictable and can be planned in advance, it would be a win-win situation for everyone,» Franzen says. Furthermore, it would give a major fuel-saving effect for the tourist boats, he maintains.

Tourism is growing quickly in the Norwegian archipelago and visitors are all eager to get a glimpse of the powerful Arctic animal.